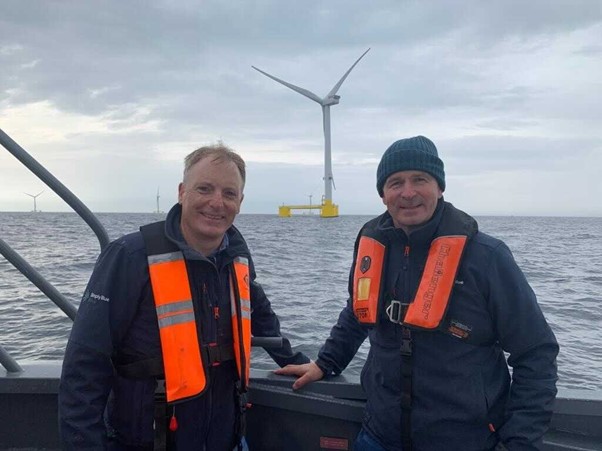 Sam Roch-Perks and Rory O’Sullivan don’t know each other, work together or live in the same country, but they share the same passion: engineering sustainable energy solutions for the future.

Both Roch-Perks and O’Sullivan graduated from Trinity’s School of Engineering, and are now CEOs of their respective companies, Simply Blue and Moltex Energy.

Simply Blue is an offshore wind company based in Cork that Roch-Perks co-founded with his Trinity classmate, Hugh Kelly. Traditionally, offshore wind has been “fixed” or anchored to the sea floor using piles, but Simply Blue is innovating with floating wind, placing wind turbines on floating platforms anchored using moorings and cables.

For Roch-Perks, floating wind has some obvious advantages compared to fixed and onshore wind – the first being that 80 per cent of Ireland’s offshore wind resources lie in water too deep for fixed wind.

“Now we’ve got floating technology, we can build at scale, and we must build at scale to solve the climate challenge”, he explains.

Another advantage of floating wind is reducing visual impact. The turbines are located 35 to 60km from the coast and are able to repurpose existing deep water infrastructure from fossil fuel extraction.

Simply Blue has a collaboration with Shell, called the Emerald Floating Wind Project, which is repurposing the platforms of the decommissioned gas field roughly 50km off the coast of Kinsale in the Celtic Sea.

“If you’re trying to come up with a story of the energy transition, you’re coming from a depleted gas well going to offshore wind-it’s about as good an energy transition story as you can get”, said Roch-Perks.

According to John Gallagher, an associate professor in Trinity’s School of Engineering, wind power is “the biggest focus for Ireland’s clean energy future”.

“The way we’re going with offshore is extremely important, but we can’t forget that it’s still only part of our system”, says Gallagher. He is quick to point out as well that Ireland is a “small fish in a very big pond” when it comes to the scale of the global climate crisis.

This is where Moltex Energy comes in, a nuclear energy company betting big on a new, safer type of nuclear reactor. O’Sullivan is the company’s North American CEO but started his career in renewable energy working in wind.

“I realised pretty quickly that although wind has a role, I just couldn’t see it solving our energy problems”, says O’Sullivan. Then he came across a new nuclear technology: stable salt reactors. “I realised, maybe there is a type of nuclear that can reduce the cost and have the right safety performance.”

“Essentially, it’s the nuclear fuel mixed with high purity table salt”, explained O’Sullivan. “It operates as a liquid, so we get all the benefits of nuclear power but we don’t have any hazard or any incident where we can have this large release of radioactivity into the atmosphere.”

Less hazard means less expensive safety systems and thus, more affordable energy production. Moltex is also able to repurpose nuclear waste from traditional nuclear reactors and convert it to fuel for their stable salt reactors. O’Sullivan says that it will be important to demonstrate that converting nuclear waste to new fuel can be a less expensive option than current waste disposal methods.

“The idea that it’s almost a second life for the waste is a huge step forward, making use of something that has quite damaging impacts, giving it a second life and producing clean energy from it”, says Gallagher.

O’Sullivan acknowledges that a big challenge for nuclear energy is public perception. “Nuclear power is very controversial, but if we want to decarbonize, we don’t have a choice. Whether we like nuclear or not, it has to be part of the mix if we want to get to net-zero [emissions].”

Controversy aside, there are a number of challenges common to all renewable energy sources, a main one being storing the energy that is being produced.

“The wind doesn’t blow all the time”, says Roch-Perks. “We must store energy in some way shape or form. The real challenge is not making cheap electrons, because we can do that now. It is: how do we get those electrons to where we need them?”

Nuclear power is very controversial, but if we want to decarbonise, we don’t have a choice. It has to be part of the mix if we want to get to net-zero emissions

Current storage methods like batteries aren’t sustainable in the long term, as they are made with rare minerals and metals. “We have finite resources in that context”, says Gallagher. “If we had enough of [the materials] for batteries, it would be a simple process. But that’s why nuclear can’t be ignored – it can provide a baseline we need.”

Once again, the stable salt reactor provides a solution to this issue. O’Sullivan explains that the heat produced from the nuclear reactor can be used in three ways: it can be used for immediate electricity production, it can be stored in large tanks of molten salt outside the reactor like a “giant battery” or it can be used to produce clean hydrogen for fuel.

“The reactor can run all the time, store the heat, for example, for 16 hours a day, and then for 8 hours a day, you could run at three times the capacity. So when the wind isn’t blowing and the sun isn’t shining, you’ve got this stored heat that you can turn to electricity whenever you want”, says O’Sullivan.

Storing the energy as hydrogen fuel is also extremely useful, as that fuel can be used to replace fossil fuels burned in cars, planes and other heavy machinery. Research is also being done for using other renewable energy sources like offshore wind to produce clean hydrogen.

Unfortunately, time is not on our side for the research and testing involved in getting these technologies scaled up and rolled out globally at affordable prices.

“The challenge with nuclear, as opposed to renewables, is the timeline of concept to delivery”, says Gallagher. “Given the global climate disaster that we’re trying to avoid and mitigate, [nuclear] offers a solution in the medium term, perhaps, rather than the short term.”

“This is heavy tech, with a lot of work needed to get it across the line”, says O’Sullivan. “It’s going to be 10 years before we have a reactor online.”

What does the time period between now and then look like? This so-called energy transition of ramping up renewable energy production and slowly closing fossil fuel production and use is the perfect home for a technology like floating wind while renewable tech like stable salt nuclear reactors are undergoing testing and development to be a long-term energy production solution.

Roch-Perks sees floating wind projects as critical for reaching Ireland’s renewable energy target of five gigabytes of offshore wind energy by 2030. There are currently 4.3 gigs of fixed offshore wind projects in development in Ireland, according to Roch-Perks, which may not all succeed – a state Roch-Perks likens to “having no subs on the bench”.

While offshore wind is clearly crucial for Ireland’s sustainable energy future, and for other countries in Europe and the UK, a successful and safe nuclear power source would go a long way towards decarbonising numerous energy sectors and reaching net zero emissions.

It will be equally important to invest in renewable energy like floating wind to reach short-term targets within the next decade and to invest in long-term projects like safe nuclear reactors for the decades to follow.

O’Sullivan is confident that once one of their reactors is successfully up and running and performing as predicted, there will be significant uptake of the technology.

What ties these two CEOs together is their passion for making a positive change for future generations. “My favourite part of the job is that we are working towards something that could make a meaningful impact on climate change and increasing energy access to the developing world”, says O’Sullivan. “I think that’s what I enjoy most, working with a motivated team with an important end goal.”

While O’Sullivan and Roch-Perks develop their respective sustainable energy technologies, researchers can look at the landscape as a whole. “I’m in the middle”, says Gallagher. “I’m looking at it from a holistic perspective. If you’re working in a sector, your primary focus is delivering on what you’re trying to achieve. It’s up to people in government and centralised organisations to figure out how much of each ingredient we need within the mix that is our energy grid.”

Developing renewable and sustainable energy sources in a society so heavily reliant on fossil fuels is a huge challenge. “But so is the energy transition”, said Roch-Perks. “So is the climate crisis – that’s a bigger challenge.”