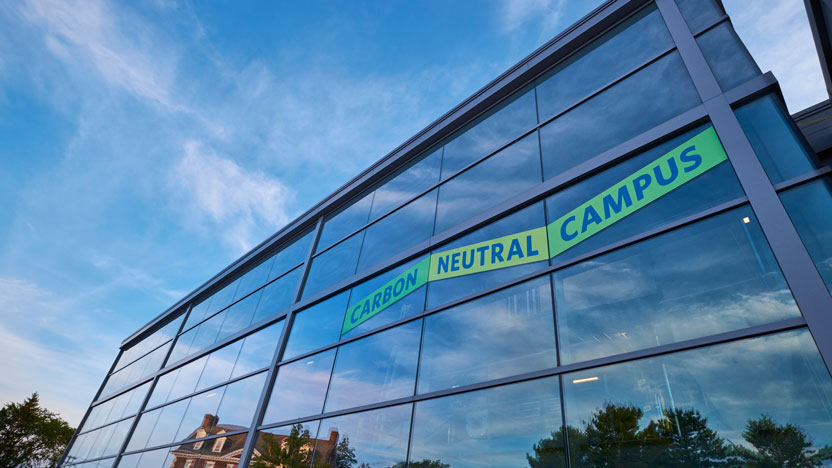 World leaders have casually bandied around terms like “carbon neutral” in recent weeks, as conversations about climate change explode onto the front pages of newspapers thanks to COP26.

It is an alluring phrase, as it allows countries to keep emitting carbon dioxide, while compensating for those emissions with offsets. Cuts to emissions tend to be painful, whereas offsetting is an easier sell, as it doesn’t mean sacrifice. Carbon neutrality as a concept has seeped into the private sector, and increasingly into universities as well.

Second Nature, a non-profit organisation working to improve sustainability in universities, lists American University and Middlebury College among the US third-level institutions that have reached carbon neutrality.

American University, situated in Washington DC, announced that it was carbon neutral in 2018, after pledging to cut its emissions down to net zero over the course of a decade in 2010.

The university made buildings more efficient, promoted environmentally friendly behaviour like turning off lights and changing commuting habits, installed 2,500 solar panels on campus, invested in a joint venture to fund a quarter of a million panels in North Carolina and looked to buy offsets to reach the zero point, as defined by Second Nature.

One offset project they got involved in reduced deforestation in Kenya by providing families with efficient woodburning cookstoves rather than open-air fires that they traditionally use, which provided jobs locally and better indoor air quality. Other projects it invested in planted trees in DC, funded efficient trucking and supported landfills that are capturing methane and using it.

In April, it released another sustainability plan to continue to drive down reliability on offsets and renewable energy credits, improve efficiency in buildings and expand on-site solar energy.

Megan Litke, the director of sustainability at the American University in Washington, says that a key goal for the university is bringing everyone into the mission to become more sustainable.

“Sustainability is obviously focused a lot on carbon neutrality and on reducing emissions and global warming and climate change but there’s so many other ways that we can bring people into that conversation than just using those buzzwords, like talking about the people that are impacted by it”, Litke says.

“I think that the importance of making those connections for people who might be hesitant to step in, to just doing things that are good for the environment, sometimes through those conversations, through bringing people into the conversation early, we can learn what motivates them and is it more making sure that racial justice is a priority or social justice is a priority.”

“There are so many direct connections between environmental problems and problems with social justice”, she adds. “And so how can we bring people who are interested in both of those topics together to create solutions for both problems?”

Another university on Second Nature’s list is Middlebury College in Vermont. Its sustainability journey started back in the 1990s, when climate change was still a distant concern for most people. The Kyoto protocol jolted the college into action and it got to work reducing its consumption to 10 per cent below its pre-1990 levels by 2012, as set out in the international agreement.

Jack Byrne, the director of sustainability integration, says that the college replaced the 2.3 million gallons of fuel oil it burned with wood chips from a $13 million biomass gasification system that Middlebury constructed. Trees cover about 80 per cent of Vermont, so the switch was a no brainer for the college.

The Kyoto protocol, he says, “initiated an effort to figure out where we could address that – efficiency, renewables, reducing consumption. We had classes that were working on portfolios of projects, so we integrated it into the educational side of the college, even though it was as part of the operational side, that was an important way to use the intellectual resources of the college to address the challenge”.

“There was a portfolio of projects that was created by a class that was co-taught by an economist and a chemist that was presented to trustees as: ‘Here are a bunch of different ways the college could significantly reduce carbon emissions and meet this target.’”

“And a number of things were done a lot of them in the efficiency realm – we’ve invested a fair amount of money on a whole bunch of changes that actually paid back on average about a three year time period.”

Middlebury replaced the 2.3 million gallons of fuel oil it burned with wood chips from a $13 million biomass gasification system that Middlebury constructed

Since then, they have conserved 2,100 acres of trees in Vermont, increased usage of renewable energy and improved the efficiency of buildings, and all in all reached their carbon neutrality goals.

“We engaged a lot of students and faculty, staff and community members and senior leadership in this process”, Byrne says.

“It really enriched the educational mission of the college. The biomass plant has been a really great source of research projects. And it raises a lot of interesting issues like is it really carbon neutral? Where’s our wood coming from? And how well managed are those forests? How efficient is the system?”

By 2028, the college wants to reach 100 per cent renewable energy sources, cut its consumption by 25 per cent and divest its endowment from fossil fuels.

But the story of carbon neutrality is complicated and the whole idea is still nebulous. Gathering enough political capital to start your sustainability journey is tough, but finding the right path, or any path, isn’t easy either.

Carbon offsets are a good example of these difficulties. The voluntary carbon offset market is intransparent, loosely regulated and incentivises the sale of more and more carbon offsets, rather than pushing companies or institutions to actually cut down their emissions. It also happens to be growing at an eye-watering pace year on year.

Gathering enough political capital to start your sustainability journey is tough, but finding the right path, or any path, isn’t easy

Niklas Kaskeala is the chief impact officer for Compensate, a Finish non-profit foundation that offers help to companies and consumers – including the London School of Economics – looking to offset emissions in a concrete way. It is a tough task.

Kaskeala compares the voluntary carbon offset market to the market for gold. “Obviously, the quality of gold is different”, he says, which is indicated by carats. Think a 24-carat golden ring compared to a nine-carat golden ring.

“But on the carbon market, basically, everybody’s buying credits that are worth one tonne. And if you use them in your corporate carbon sheet or carbon balance, you can offset one tonne of emissions for one credit.”

“But in reality, the quality of these credits varies a lot. Some are better, some are worse. But how much they’re worth in terms of CO2 stays the same.”

The voluntary carbon offset market is intransparent, loosely regulated and incentivises the sale of more and more carbon offsets

Some 90 per cent of projects don’t reach Compensate’s standards. The foundation then “overcompensates” on the projects that do make it into its portfolio – it gives each credit a “true climate impact factor”, which could change its worth from one tonne to 500 kilograms. On top of that, it wants credits to have a climate impact – not just level off climate emissions.

“But then we add another layer of overcompensation on top of that, because at this point in the climate crisis, we’re already at CO2 levels in the atmosphere that are extremely high. And we passed the safe levels of CO2 back in the late 80s already.”

“So there’s no point in offering a service that sort of offsets in a one-to-one ratio – we need to go beyond that. Basically, we need to remove carbon dioxide from the atmosphere that we’re emitting.”

“So we add another layer of overcompensation on top of the one I described earlier, just to also take care of the climate debt that we’ve accumulated over the past decades.”

As if finding good offsets wasn’t a hard enough problem, carbon neutrality itself can mean different things to different people. A mistake many institutions make when declaring themselves carbon neutral is ignoring emissions that are more covert – for example, the emissions from people travelling to and from the university.

Prof Eckard Helmers, an environmental chemistry expert from the University of Applied Sciences Trier, says that universities are quantifying only some of their emissions. This is akin to measuring the carbon emissions of say an electric car battery, while ignoring the emissions required to build the battery in the first place.

There’s no point in offering a service that sort of offsets in a one-to-one ratio. We need to remove carbon dioxide from the atmosphere that we’re emitting

Furthermore, he adds, universities can only reach low emissions – never mind carbon neutrality – by switching to a 100 per cent green energy supply. And even then some carbon emissions will need to be compensated.

“First, the operational energy consumption has to be decreased as far as possible by renovation, insulation and other other measures, maybe some new buildings – that’s very essential. Then second, you’ll need to switch to 100 per cent green energy supply. And then third, you need to know your embodied impact emissions.”

Countries face similar problems: Europe hopes to become carbon neutral by 2050, but will rely on technology often coming from China.

“In China”, Helmers says, “they will become carbon neutral maybe in 2060 or so. So all of the goods you are purchasing in China or the technology will have a certain carbon dioxide impact, because it is produced under 60 per cent electricity from coal-fired power plants in China today”.

“They are still opening new coal-fired power plants, which means it’s essential at the next step to quantify the carbon dioxide enclosed in your infrastructure.”

Universities are quantifying only some of their emissions. This is akin to measuring the carbon emissions of say an electric car battery, while ignoring the emissions required to build the battery in the first place

A good starting point for most universities would be assembling a reporting system. A study co-authored by Helmers found that only a small number of universities around the world collect and publish their carbon footprints, and there was limited consistency between the reported footprints. This was down to universities using different analysis methods, impact measures and target definitions.

Universities collecting and publishing all information about their carbon footprint “is an important step to make them comparable”, Helmer says. “And only if we are agreeing about what we’re talking about, when it comes to the emissions, that we can together approach the target to become carbon neutral.”

Universities often rely on rhetoric around promoting research into climate change, but a desire to cut down on emissions in a tangible way is still missing.

Reaching carbon neutrality will be a major goal for universities as they seek to become prime actors in the fight against climate change. But most universities haven’t seriously started down that path – and it will be a rocky one when they eventually do.