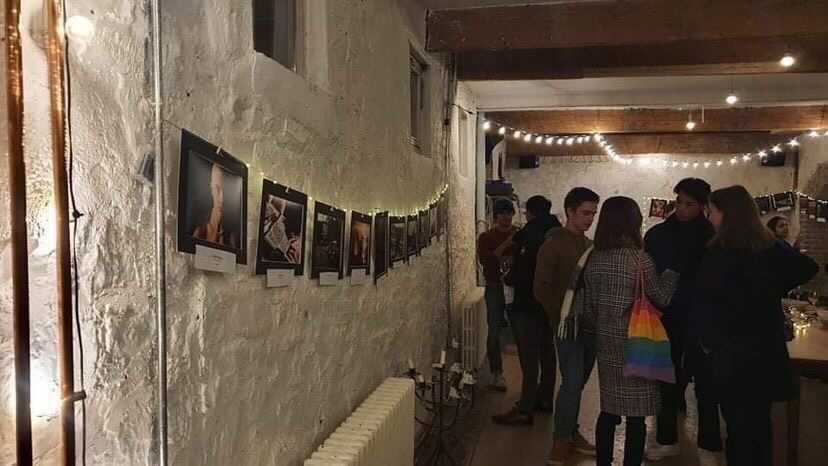 Dublin University Photography Association (DUPA) is without doubt one of the most creative bunches on Trinity’s campus. If you follow their Instagram page or keep up with their exhibitions, you will know how eclectic the art platformed and produced by the community is. Thanks to the return of in-person events, DUPA has been able to host some highly-anticipated exhibitions and last night’s was the second and last one of the semester. ‘After Sundown’, the Christmas exhibition held at The Fumbally Stables cultural centre in the Liberties, was inspired by the days getting shorter and the nights getting livelier.

Any and all students were encouraged to submit their original works, with a post on DUPA’s social media pages saying that “the theme is open to interpretation”, and so they were “excited to see how this theme inspires you”. A contagious buzz grasped the room as students from every kind of discipline took in the art work around them. Friendly greetings and enthralled conversations about the pieces were interspersed with the crunching of the cheese and crackers provided by DUPA alongside a selection of wine.

The space was warm and colourful – an interesting juxtaposition to the contemporary theme of the exhibition. Even people who had never been to a DUPA event before and were just there to browse the photos or make some friends were welcomed heartily by various committee members.

Speaking to The University Times at the event, Margareta Ruysschaert, DUPA’s exhibitions officer, described how the society strives to make photography open to everyone, regardless of experience. “I didn’t even own a camera when I initially joined. When I attended my first event the people there were so lovely and welcoming that I decided to sign up.” So whether you’re a Leica Pro or you’ve just posted your first VSCO, you won’t be met with any artistic elitism. The DUPA committee is there to help you train and flex your creative muscles.

Ruysschaert had some of her own work on display, mostly depicting the way live concerts can generate an atmosphere. Especially interesting were the pair of photos ‘Last Gig Before Lockdown’ and ‘First Gig After Lockdown’, which vividly played tribute to the joy and community live music brings.

Lining the walls bathed in an orange glow were photos from every style of photography. Ruysschaert was particularly proud of this but mentioned the consistency in some of the evening’s themes: “As you can see there are a lot of sunset photos, photos at gigs and house parties, before, during and after the pandemic.”

Attendee Sam O’Brien said that his favourite photo of the exhibition was the one of a (seemingly) small t-rex sitting on the rocks by the sea under the stars. The photo was taken by Milan Loiacono, a postgraduate student. Reading the captions under the pieces, the audience was treated with insights into the photos. The caption under Loiacono’s piece, possibly a commentary on social media as a performance, read: “Stargazing Marvin T. Rex sits contemplatively, keeping a nervous eye on the sky for potential meteors. In reality, my brother put the inflatable costume in a drybag, swam out to the rock, and sat in the freezing cold for this shot before swimming back. Another friend swam out with him and quite literally hung off the back of this boulder with a flashlight to light him up from behind.”

As the daylight faded and shuffled out into the cold, you couldn’t help but feel inspired by the impact such a community can have to people, especially in times like these.

The eclectic mix of pieces was tied together by the equal measure in which they were celebrated at the exhibition. Coming to an exhibition like this with low expectations is a mistake you’ll be glad to make but quick to recognise, with an abundance of talent on every wall. If the aim of the society is to bring people together and create an environment where everyone can express their creativity, the team is succeeding.