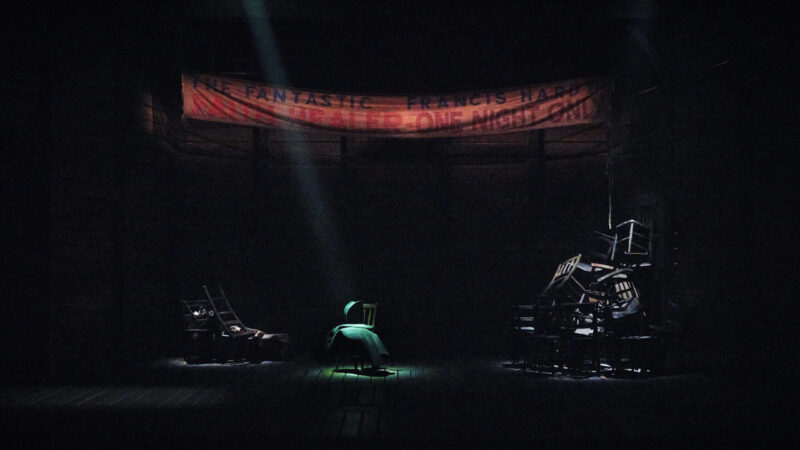 Sinziana Stanciu for The University Times

Despite the various challenges presented by the changing Covid regulations, Faith Healer, written by Brian Friel and directed by Joe Dowling, will continue to grace the stage of the Abbey Theatre until January 22nd. The performance beautifully revitalises Friel’s dreamlike content, encapsulating the audience with three interwoven yet distinct stories.

The narrative centres around the soliloquies of three characters: Frank, Grace and Teddy. The trio visit towns around Wales, Scotland and Ireland as Frank charges people to heal them of their ailments in the guise of the “Fantastic Faith Healer”. Meanwhile, his wife Grace, experiences an emotionally charged journey as attempts to process the loss of her stillborn child whilst struggling to form an independent sense of self away from Frank.

Teddy is Frank’s manager and proves to be equally as unsteady as he is blinded by love. Indeed, each character provides different versions of the events in the show. This results in a messy timeline which illustrates the dangers of basing your self worth on the perceptions of others.

Friel’s writing is exceptional, and the superb direction by Dowling enables the actors to come to life in a genuine manner, electrifying the stage with their ability to command the audience. Are we simply privy to their innermost thoughts and fears, or are they curating their message to account for their own self indulgence? These are the types of questions that are perpetually left unanswered, prompting the audience to attempt to piece together exactly what happened. Although this is partly the purpose of such competing narratives, it does leave audiences with a desire for clarity. Throughout the play there are differing timelines and discrepancies that are never resolved, leading to a loose conceptualization of objective reality.

The female voice is particularly well handled, with Niamh Cusack portraying the character Grace. Friel’s writing fully encompasses the difficulty of a woman struggling to listen to her better angles while also expressing her fragility. Grace attempts to deal with the abuse she has encountered leading to internal struggles and alcoholism, adding complexity to her character.

Cusack’s portrayal of Grace is sobering in her depiction of the long-term implications of an abusive relationship and the loss of a child. Her performance is enthralling because of her command of space on the stage, alongside the creation of tension with Frank’s character. Cusack embraces Grace’s character and powerfully delivers her misery to the audience, forcing us to confront the manner in which life and the loss she experienced as a woman compel her to recite a chant shared with Frank.

The minimal set design, paired with the lack of intricate and ornate props allows the emphasis to be placed on the dialogue. The costume design was thoughtful – Frank’s coat and top hat notably remain on stage throughout the entirety of the play, communicating his omnipresent impact on Grace and Teddy’s lives. Furthermore, in Teddy’s soliloquy, there is an empty dog bed, which he never explicitly references but alludes to a former client that showed excellent talent. It is empty, foreshadowing the loss that audiences learn about through a more comical but equally somber telling of key stories.

Teddy lifts the spirits of the audience however, as he drinks more, the sadness of the stories punctures the comfort created by the red and mahogany themed setting that Teddy is introduced to us in. Although Teddy’s character is not meant to evoke the same sentiments as the other characters, Nigel Lindsay’s performance could have made a better use of space.

Faith Healer is certainly a thought-provoking play with layers that prompt us to question the greater relationships we forge, our perception of reality, and why truth matters.

Faith Healer is running from December 3rd to January 22nd 2022. Tickets can be purchased on the Abbey Theatre website