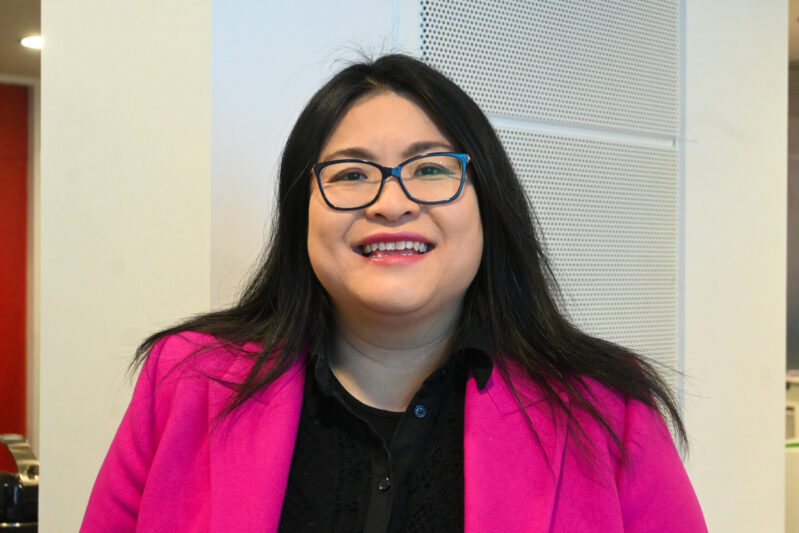 Hazel Chu has a number of political accolades to her name. She was the first Irish-born person of Chinese descent to be elected to political office on this island, and she was the first-ever mayor of Chinese descent in any European capital. For Chu, a Green Party councillor, the Seanad seat presents itself as an opportunity for change and leadership.

Her priorities for the campaign will be mental health, inclusion and women’s issues, but she also stresses that, post-pandemic, she does not want to “move on to politics as usual”.

Indeed, Chu is a strong advocate for women’s issues. Wearing her Repeal jumper for her interview with The University Times, she makes no secret of her belief in access to reproductive health and, more recently, the creation of exclusion zones around maternity hospitals. “Physical health, especially maternal health – so women’s health issues – were always put on the backburner. But you can notice that it’s even more so during the pandemic”, she says.

In terms of tackling gender-based violence, particularly across higher education, she believes from talking to Trinity graduates, and sitting on the board of University College Dublin, that while policies are necessary, they can “only get you so far”.

Physical health, especially maternal health – so women’s health issues – were always put on the backburner. But you can notice that it’s even more so during the pandemic

“It’s the structural changes that have to be built – you need the foundation for support of people being able to report without being official, and even if it’s unofficial, that it’s treated as an official case.”

“From working with and talking to [the] Rape Crisis Centre, there’s a lot of reports that come through to their own system, then can’t go anywhere. So we need to really provide that care there for people that have gone through trauma and can’t officially report it or don’t want [to].”

On the housing crisis, Chu says she would work for green mortgages for first-time buyers. Citing student protests earlier this year against Dublin City Council’s lack of action on student accommodation, she is emphatic that student accommodation should be made available with the help of state funding. “We seem to be putting a tourist into housing, and our homeless families into hotels. Those models all need to change because we’re currently putting students into these overpriced private accommodations that they can’t really afford, or in shared living, as well, which takes up room for families.”

“That’s not as bad saying they’re taking up those places, it’s because they have no other choice. So [we have to] make sure that there is fit for purpose accommodation built for students.”

We seem to be putting a tourist into housing, and our homeless families into hotels

Chu believes that it is for government departments to collaborate in addressing these issues. On the homeless subcommittee she set up while mayor, Chu says she “spoke as much with the HSE, as [she] did with the Department of Housing” regarding providing support for those who are homeless.

Chu has said that, while she is not a Trinity graduate herself, many of her constituents in Pembroke are, and she spent a year living in the Mansion House, a stone’s throw from the campus. In terms of university governance, she believes that all higher-education institutions should be afforded equal opportunity.

On the controversial Higher Education Authority Bill – and the very controversial exemption being mooted for Trinity – Chu says: “If we’re going to benchmark standards, if we’re going to have proper kind of standards fit for purpose across the board, it has to be able to be applied across board, colleges, it has to be able to benefit all students.”

When pressed on why Trinity should change its governance structure if it works for them, Chu says that “there is a reason that Trinity has got and excelled to the level they have”. Drawing on her time on boards of different colleges however, Chu says “there is a better fit for purpose management style”.

Emphasising her connection to Trinity, Chu is keen to mention she’s spoken to many graduates about her candidacy

“If we are to continue to promote the idea that we turn out the best scholars, turn out the best innovators, the very best creatives, it’s a collective process, almost, so I do think there’s a huge space for Trinity to take the lead in it.”

Emphasising her connection to Trinity, Chu is keen to mention she’s spoken to many graduates about her candidacy. After having the College campus in her constituency as Lord Mayor and with Trinity Halls as her current constituents, Chu appears serious in her convictions saying that she feels “a sense of pride” about Trinity. With a Seanad seat, she wants to “continue that sense of pride and to continue [to] develop better policy for not just Trinity but for Ireland”.

In terms of Seanad reform, Chu says: “My proposal would be very simple, look at the work that has been done… can we make it very simple? That, even if colleges select their candidates, at the end of the day, the people [who] get to vote is a much wider choice.”

Of course, a significant chunk of the electorate are PhD students, and the working conditions of such people is shaping up to be a major talking point in the election. Last week, Chu made her stance clear, remarking that if doctoral candidates weren’t paid enough, they would emigrate. She reiterates that “just because the system was that five years ago or 10 years ago, doesn’t mean it should be that now, bearing in mind the cost of living”.

“I’m done with this whole ‘it’s a learning experience and you’re paid in knowledge’.” PhD students “also need to eat”, she quips.

The meagre pay for doctoral candidates has further-reaching effects on the reputation of Ireland’s knowledge economy, she adds. “How do you expect us to compete on the international stage if you are not willing to pay those who are carrying out really cutting-edge research for us?”

Indeed, Chu does not intend to focus on inequality in higher education alone – accessibility and inclusion across the board are key pillars of her campaign. She says that during the pandemic, she worked with disability groups to sort out how “the city will be fit for purpose”.

But, returning to higher-education issues, Chu says she does not just want quotas for diversity and inclusion in higher education for example, but rather accountability if targets are not met. “There’s a certain element of responsibility for the colleges to hit their objective. I’m quite tired of the buzzwords of inclusion and diversity.”

“From a college point of view, it’s up to them to put their money where their mouth is, and actually recruit across the board.”

Although running as an independent candidate in this election, Chu’s role in the Green Party means she is particularly vocal on climate change. Despite welcoming recent progress in government with the Climate Action Plan, she believes more needs to be done for Ireland to lead by example in addressing the climate crisis.

When you look at liquid natural gas and the various government leaders arguing over it, you’ve got to ask: is this worth the cost for future generations?

“There’s these huge fossil-fuel companies taking action against the state and directly affecting their policies. Anything from environmental [and] housing policies, it’s why we shouldn’t have something like CETA [Comprehensive Economic and Trade Agreement, a controversial trade deal among environmentalists].”

“It comes back to the environmental costs. When you look at the LNG [liquid natural gas] and the various government leaders arguing over it, you’ve got to ask: is this worth the cost for future generations?”

Chu has attempted to run for the Seanad before, but her candidacy was mired in controversy: she faced a vote of no confidence from the Green Party, with 10 Green parliamentarians opposing her bid. Chu believes this time will be different: “I think whatever issues we had in the party, my candidacy happened to be the cherry on top rather than dividing everyone and it just was unpleasant for all. So I’m hoping that with how everything has moved on and how politics has moved on as well.”

She believes that her experience is an asset for the Seanad. “I spent a year managing a city that was in flux and I saw it through its worst times and whether believe or want to see it, I did lead the city.”

“I want to bring that experience and bring the connections I’ve had with various departments and ministries – sometimes good sometimes bad – into working for Trinity graduates and others in the Seanad”.

“I don’t think we can wait for someone that will find their feet. I think we need someone who will get the job done now.”