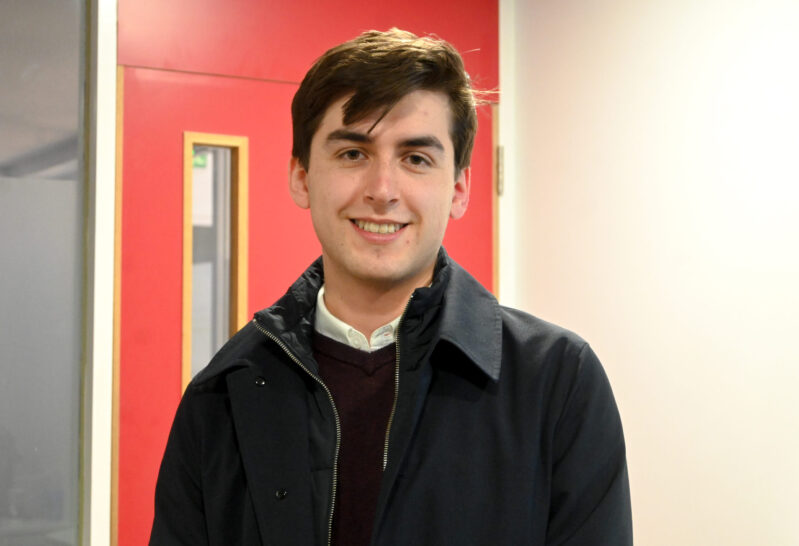 Ryan Alberto Ó Giobúin, PhD student in Trinity’s Department of Sociology, is determined to put his expertise to good use and end educational inequalities if elected to the Seanad. In an interview with The University Times Ó Giobúin says he views the election as “an opportunity to really delve into educational inequalities” and to “get this message across to a wider audience”.

He does acknowledge, however, the caveats of the Seanad. Ó Giobúin is clear that while he believes the Seanad is necessary, it needs reform. “That’s [why] people voted to retain it … they didn’t vote to retain it in its current format”.

Having spent the past five years researching the negative repercussions of gaps and inequalities in education, Ó Giobúin stresses that although these are far from new problems, the coronavirus pandemic has significantly worsened the situation. “I think there’s this assumption that now schools have re-opened, everyone is just going to go back to [normal], and everyone will have lost the same amount of knowledge.”

“We know from research in other countries, this is not the case – everyone basically suffered a bit from school closures. But some suffered a lot more, not only did they miss, for instance, two or three months of school, but they actually regressed.”

Ó Giobúin says there are contrasting viewpoints of equality of access to education, with some who believe that high university progression rates illustrate that “everyone has equal opportunity to perform well”. While he believes it’s a positive that more people are going to university, he points to the fact that in Trinity, over three quarters of students come from “above socio-economic status”.

“This is inequality – it’s right in front of us”.

“The inequalities we see in universities are showing gaps that are emerging right through the education system, even from preschool. When you look at when children are entering school, these gaps are already emerging in terms of, for instance, vocabulary. And when we talk about preschool, we talk about it mainly from an economic perspective.”

“If we don’t invest now, we’re going to be seeing these problems manifesting themselves into the future, and we’re playing with people’s future[s] here.”

“That’s what I want [all candidates] to campaign for. If other candidates see these things and draw on it and make it [their] own issue I’m more than happy, because I think this is more than a political campaign.”

The Seanad is limited in what it can do, but what its virtue is, is that it’s a platform in which we can expand on things and say: this needs more attention

Acknowledging gender-based violence within higher education and beyond, Ó Giobúin says he wants to get the message across “that we can’t be tolerating this”. It’s one thing to have people doing these actions, he says, but “there’s also a situation to allow this to be going on in the background and that’s worrisome”.

Ó Giobúin hopes the Seanad is the place to fix these inequalities. “The Seanad is limited in what it can do, but what its virtue is is that it’s a platform in which we can expand on things and [say]: this needs more attention”. He believes that the Seanad’s image is an issue. “It is viewed in relation to the Dáil as a way of either political opportunity to get a profile in order to go to the Dáil or vice versa. And I think people like David Norris and Lynn Ruane have really improved the profile of the Seanad, at least in my eyes, because they treated it with a respect for politics.”

He believes that the “Seanad should be a constant citizens’ assembly. These people are representing the citizens in a more rarified, respectful environment, perhaps than you see in the lower house”.

As a PhD student himself, Ó Giobúin “definitely think[s] they should be classified as workers”.

The Seanad should be a constant citizens’ assembly. These people are representing the citizens in a more rarified, respectful environment, perhaps than you see in the lower house

“I was quite fortunate in the Department of Sociology, I do feel that I was treated well. And I do feel like I got a good stipend. And I’m grateful for that, he says. But he acknowledges that “in general, PhDs don’t really have any rights per se”.

“If we compare ourselves to other countries, like Sweden or Belgium, all these different places do have PhD rights. And that means if you get sick [and] funding dries up. If you have a family or something, you can take maternity leave. PhDs at the moment in Ireland aren’t conducive to family life. They aren’t conducive to a healthy working environment to start with.”

Speaking about Ussher fellowships in Trinity which were offering €13,000 per year for those with a first-class honours degree in STEM – the cost of living in Dublin for an undergraduate student is estimated at €14,000 per year – Ó Giobúin wants to see a change.

“We’re really limiting ourselves to saying the only people who can do PhDs are people from relatively well off social backgrounds that can actually absorb the cost of doing this research. But they must have done very well in education previously, we only want the best. And you don’t have any rights while you’re doing it. That’s not healthy.”

He depicts a sector starved of funding: “[University] funding has absolutely dried up in terms of the capitation grant, it’s less than half what it was 10 years ago. What the state is actually giving to Trinity is less than 50 per cent of what it was in 2009. So they’re looking at ways of cutting costs, they also need research to be done, and PhDs traditionally have a lot of research coming out that’s research led, so I can see why they’re pushing for it.”

In regard to housing supply, another social issue that many PhD students are keenly aware of, Ó Giobúin says: “We need to have a discussion on where the state [comes] into this.”

On climate change, Ó Giobúin says Ireland “needs to look beyond its size” in the future. “I don’t think we can look back with self respect and say we didn’t do our part because we were waiting on other people to do their part”. He notes that individual efforts need to be made as well. “Are those individual changes going to make any difference in the wider scheme of things? Probably not. But we can’t in any way [say we need a wider policy] without being a hypocrite. We need to look at ourselves, then really put pressure on the government.”

Drawing a parallel with the coronavirus pandemic, Ó Giobúin cites successful collective efforts towards social responsibility as an indicator that our society is “willing to take a bit of a hit, but with a realisation that this is for the greater good.”

Coming back to education – specifically the Higher Education Authority Bill and Trinity’s controversial exception – Ó Giobúin says: “I think it’s important that Trinity keeps its autonomy or a little bit of autonomy.”

He returns to the funding issue again, arguing that the main issue with more state control over university governance structures has been the lack of direct state funding for higher education. “Right now Trinity’s largest source of funding is fees. In 2009 it was state capitation”.

“Right now in the OECD we have the lowest expenditure as a percentage of GDP in education within developed countries. For a country that’s saying we are at the forefront of [the] knowledge economy, we actually don’t value it enough to spend money on it. There’s a contradiction here.”

Returning to his main campaign goal, Ó Giobúin’s message is clear :“We need to be serious about investing in education.”