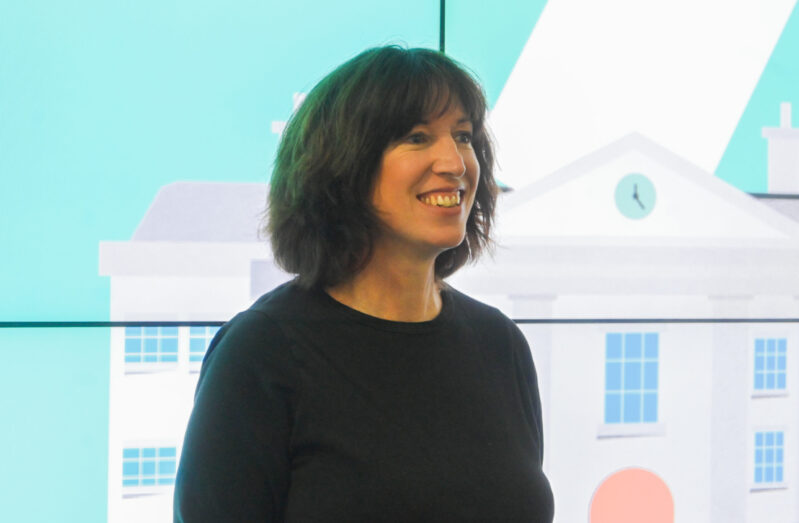 Emer Moreau for The Universit Times

Seanad bye election candidate Sadhbh O’Neill says her time in Trinity was “foundational” to who she is. A contemporary of the 1989 Trinity College Dublin Students’ Union (TCDSU) President and current TD Ivana Bacik, O’Neill was a student when four TCDSU officers almost landed in prison when the union published information relating to abortion in fresher’s week handbooks.

In an interview with The University Times, O’Neill said the incident “had a profound effect” on her. “It made you realise the absolute limits on what people were allowed to do.”

As an English and philosophy student, O’Neill quickly developed an interest in student politics herself. Becoming heavily involved with the Trinity Young Greens, she agreed to put her name forward to run for Dublin City Council, despite still being in college.

Being a councillor taught me so much about the policy process, about politics and about campaigning

O’Neill said she had no expectation of winning the election. A recipient of a J1 visa to the United States, she said she told the party she would put her name down, “but I’m not going to be able to campaign because I have exams first, and then I’m going away”.

While working in America that summer, O’Neill woke to discover she had been elected.

Spending five years as a Green Party councillor including as the Deputy Lord Mayor of Dublin, O’Neill said the experience taught her “so much about the policy process, about politics and about campaigning”.

Since that time, O’Neill has worked for various environmental campaigning organisations including Earthwatch and Friends of the Irish Environment.

In 2016, she began a PhD at University College Dublin (UCD) in political philosophy and carbon markets, which she is still in the process of completing. O’Neill is currently an assistant professor in Dublin City University’s (DCU) school of law and government where she teaches classes in climate policy and politics.

My agenda overlaps considerably with the Greens, but I’m not encumbered by those political pragmatic decisions that the party needs to be in government

No longer a member of the Green Party, O’Neill says she is a “green with a small g”.

“My agenda overlaps considerably with the Greens, but I’m not encumbered by those political pragmatic decisions that the party needs to be in government.”

“If elected to the Seanad,” she promises, “my first goal will be to hold all of them to account for the promise that they made to the electorate in the program for government of reducing emissions by 50 per cent by 2030”.

“We’re not remotely on track to achieving that.”

O’Neill said her approach to climate politics is a “whole-of-society approach”.

“My agenda going into the Seanad is not just about legislative reform”, she said. “It’s also about using that political space as a way to inspire, and mobilise civil society and the public in climate action.”

The historically independent role of Trinity Senators provides a certain power, O’Neill believes, in that the constraints of deal-making and party politics “need not apply to a Trinity Senator”. She said the role will allow her to be “a campaigner, and not just a political actor”.

O’Neill fought back against the assertion she is a single issue candidate, “because the climate crisis is not a single issue, it is a political agenda in its own right”.

Turning to environmental justice, she pointed to research her team at DCU is working on investigating the varying levels of impact of environmental pollution and risk on disadvantaged groups in Ireland.

The connection, she said, lies in “an overreliance on market instruments and the financial system to deliver basic human needs”.

Social-justice issues are intimately connected to the climate agenda

Both issues require “a much more interventionist approach.”

O’Neill does not believe the state or the market can be relied upon to deliver housing. Instead, she proposes “we go so radical by providing households and groups of households with service sites in which to build their own” homes.

In what O’Neill said is a “general libertarian idea that you have some agency and control over your life”, she suggested that “wherever possible, we need to be able to support people in housing themselves.”

Higher education and student issues appear to be less of a priority for O’Neill. Unfamiliar with the Higher Education Authority (HEA) bill in her interview with this newspaper and doubtful about giving worker’s rights to PhD candidates, the DCU lecturer did not give an impression of familiarity with an area that will be important to many Trinity graduates.

With regard to environmental policy within College campus, O’Neill said “part of me wants to get all the cars off Trinity campus”, but would not commit to the stance.

Asked about her position on issues affecting underrepresented communities such as LGBTQ people, O’Neill drew on her friendships with transgender individuals. She said “the loud, shouty stuff on the internet” is not representative of the struggles they face. She argued that trans people are asking for “so little”.

She said one friend only “wants to be seen as a woman and be able to walk down Temple Bar into a welcoming pub and have a drink”.

Those that “experience layers of exclusion or barriers through low income, being migrants, being a person of colour, being a woman, all those things put together create an extra set of challenges and difficulties”, she said.

Legislatively, O’Neill said, many of today’s social challenges are “down to the design of our tax and welfare policies”. She argued that “it’s going to be very important” to address “the way that women are still burdened with caring responsibilities for children and how older people are often excluded from the workforce”.

O’Neill believes the recent murder of Ashling Murphy has shown that “the answer is not always about rights,” when it comes to women’s issues. The “misogynistic culture and misogynistic attitudes” present in Ireland are directly linked to gender-based violence, she said, adding that in her own teenagers, she sees people who “are very aware” of “sexual politics”, but “on the other hand, they feel that they don’t know how to navigate this territory”.

Sex education in Ireland “is minimal, and quite pathetic”, O’Neill said, adding that she doesn’t understand how “such a high degree of segregation between boys and girls in education helps us learn to understand each other better”. The “legacy effect of religion” is “definitely contributing to that poor level of sex education”, she says.

She added that a “fundamental shift in the state’s capacity to insist on certain types of sex education being rolled out at different ages” is urgently needed.

She is well briefed on the emerging question of big tech companies, expressing deep scepticism about the effects of such companies on today’s society. “Our attitude towards technology needs to be really brought under scrutiny.”

“These companies are so powerful”, she said. “It’s quite extraordinary that they haven’t been forced to break up.”

Their power to “decide what we see and how we see it”, as well as their role in “reshaping our social relations” is of concern to O’Neill, who believes that despite their positive ability “to empower” and technology that has “transformed society for the better”, she hopes to use her role in the Seanad to raise “debates and conversations that we really need to be talking about”.