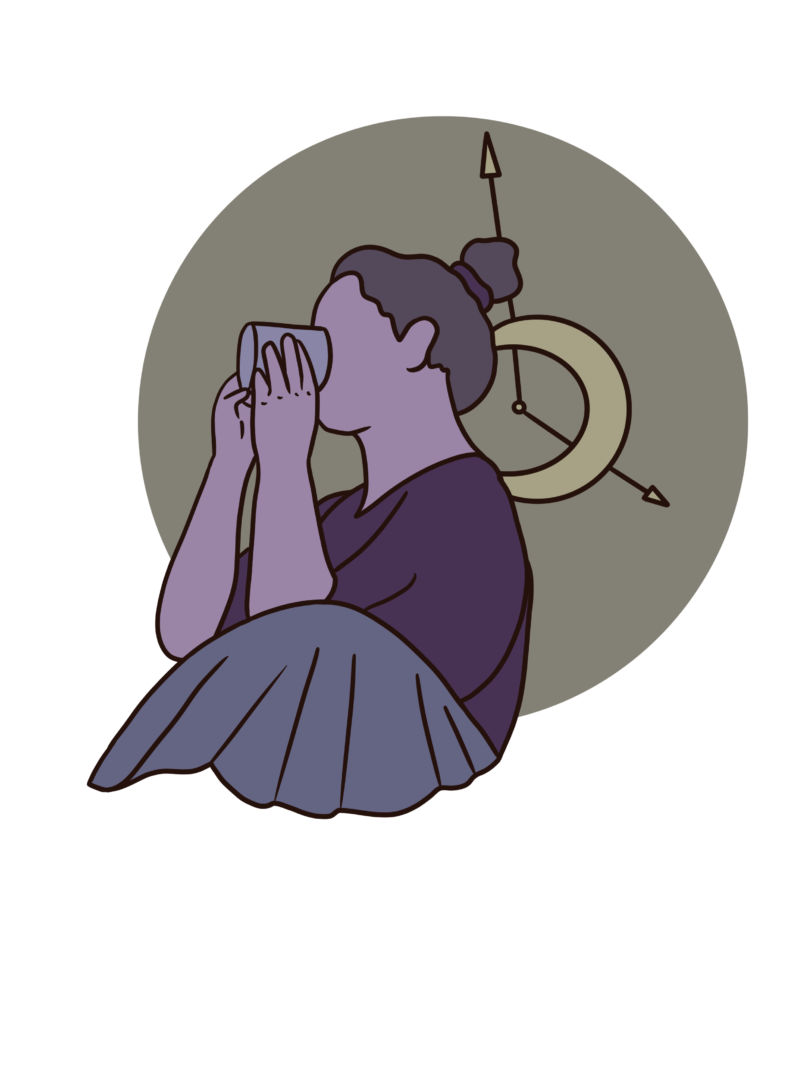 Illustration by Meghan Flood for The University Times

The title of Ireland’s leading university is a ranking which Trinity holds with pride, but the maintenance of this esteem can be both a privilege and a burden to Trinity’s students.

University campuses like Trinity are celebrated for their capacity to connect students and educators in shared disciplines. The union of these groups can be of huge benefit to academia as is illustrated by the certificates and accolades that adorn the College campus. However, alongside these visible consequences of the shared strive for success, there are also the more concealed implications of a culture that is inherently competitive by nature.

The prioritisation of academic achievement often occurs in conjunction with the internalised neglect of student wellbeing. This concept has received many colloquial labels including “the grind”, “the hustle” or even just “student life”. Sharing the same core features, these informal titles are increasingly categorised under the theory of toxic productivity.

Senior Clinical Psychologist Dr Sarah Collins explains a fundamental element of toxic productivity as when we “constantly place value on doing more and achieving more, often at the detriment of our own mental health”. A third-level institution encourages students to work hard in the pursuit of a degree and academic validation. Students who internalise these pressures risk developing an unhealthy overemphasis on the aspects of their life that are marked for educational merit – and affording their self-worth an equivalent value. A key feature of toxic productivity, according to Collins is “the idea that achievement and improving yourself externally should take precedence over your internal emotional wellbeing”.

Modern-day western society encourages us all to strive for wealth, fame, accomplishment, beauty as the norm

However, emotional wellbeing is not accounted for when degrees are awarded, and there is a cultural expectation that students at selective and elite universities may need to sacrifice this aspect of their lives in order to succeed academically. While universities have been modernised since their conception, Collins explains that the fundamental concept of academic success has thrived on the premise that a “modern day western society encourages us all to strive for wealth, fame, accomplishment, beauty as the norm”.

Collins also offers a potential source for the prevalence of toxic productivity in the higher-education sector. “Through social media and the Irish schooling system, we are often encouraged from a young age to want to be the ‘best’ at everything we try our hand at. This often leads to a competitive and sometimes relentless streak in a young person to set their sights on the ‘best’ university or what they might perceive to be the ‘best’ third-level degree, in order to feel like they’re worth praise and acknowledgement by their parents and peers.” However, what society determines as the best does not take into account personal desires, priorities and pursuits, instead valuing exclusivity and challenge.

In Trinity, opportunities to be achieving more are never far away. Lengthy secondary reading lists are accessed with a quick click onto Blackboard, and for students on the Trinity mailing list, fairs or events to bulk up a CV tend to be harder to avoid than they are to locate. The looming concern of a precarious job market encourages students to undertake additional measures to enhance their interview chances or support an internship application. Students often supplement their part-time work with unpaid roles to enhance their future employability.

Furthermore, most students must also accommodate time for any other personal responsibilities, extracurriculars or hobbies. The knowledge that there is always something more that could be done in the name of academic improvement is a mindset with a default set to guilt.

Students can become caught up in the idea that ‘if I don’t totally focus on one thing, I am putting it at risk, I’m jeopardising it’

Toxic productivity is rarely an isolated model, and it frequently gains momentum in conjunction with the rigid boundaries of failure and success, or perceptions of self-worth. Data from American, Canadian and British college students published by the American Psychological Association in 2019 indicates that perfectionism and often self-imposed high expectations for educational and professional advancement among students have increased by 33 percent since 1989. The repetition of this toxic productivity cycle persists in the societal acceptance of what a student lifestyle consists of.

There is both a cultural expectation and acceptance that a student will have poor eating and sleeping habits. This sacrifice is excused by the pursuit and achievement of a degree. A caffeine-heavy diet appears to be justified when it enables a student to replace hours of sleep with revision. Students become accustomed to measuring achievement through submitted assignments and the subsequent grades. By contrast, a full night’s sleep can appear ironically unproductive when it does not result in the receipt of a numerical mark to affirm its specific benefit.

The toxic productivity mindset may manifest itself in students’ distorted perceptions of their societally accepted lifestyles. However, within Trinity there is also a physical manifestation of the resources that can support and affirm this culture. On one end of the scale there are vending machines that solely offer caffeinated energy drinks. The other end of the scale includes the facilitation of a 24-hour study space in the Kinsella Hall library. Further indication of this institutionally prominent culture was highlighted by the December offer in the TCDSU shop of 2 cans of Monster for €3 – a sale which was categorised as an Exam Deal alongside refill pads. The implication appears to be that energy drinks are on par with writing paper when it comes to exam preparation within Trinity.

Jo Harney, the training and groups manager of Trinity’s Student Counselling Service, recommends that students become aware of inclinations to focus on specific academic tasks at the expense of basic needs such as extracurriculars and sleep. She explains that students can become caught up in the idea that “If I don’t totally focus on one thing, I am putting it at risk, I’m jeopardising it”.

Harney urges students to be compassionate with themselves and to remember that the information they receive from their peers regarding lifestyle habits are a “snippet of an experience rather than the full picture”. Students who are accustomed to competing with one another on an academic stage may find themselves more inclined to lean into other comparisons around unhealthy behaviours. Harney says she would “encourage people to recognise that actually psychologically speaking we don’t function very well if we are just focused on one thing”.

Many traits associated with toxic productivity are brushed off as being short-term or temporary actions justified by the long-term gain of an academic qualification. Toxic productivity and burnout are not formal diagnoses that can be identified by a GP or the DSM 5. The lack of a definitive diagnosis facilitates a disregard for the physical implications of this mindset.

Describing some of the harmful consequences of toxic productivity, Collins includes “all of the negative effects that being in a prolonged state of stress can have on your physical and mental health; gastrointestinal problems like IBS, heart problems, obesity, depression and drug/alcohol dependency”. Toxic productivity is a relatively new psychological concept but with significant dangers already being linked to the theory it appears unlikely to remain that way for long.

Trinity student and NiteLine volunteer Zara Connaughton offers insight relating to student stressors. NiteLine is an anonymous, confidential, non-judgemental, and non-directive helpline service run for students by students. The service is affiliated with six Irish colleges including Trinity. One of the foundational features of NiteLine is the anonymity provided. Without the burden of sharing which college they attend or any information that may reveal identifying information unless they choose to, students are offered a resource to share their experiences. Of NiteLine’s caller base that do mention the college they attend, approximately 34.6 per cent are estimated to be Trinity students.

“Roughly 20 percent of the calls we receive centre [around] college or academia. A further 15 percent of the calls we receive relate to general mental health or stress”, explains Connaughton. While the unpredictable nature of the NiteLine calls mean distinguishing seasonal patterns can be difficult, Connaughton reports that “during our last exam period, the number of calls that our volunteers received increased by almost 50 percent.”

Exam sessions are in many ways the culmination of the academic endeavours and stresses that students face throughout the academic year. Instead of a brief flicker that could be stamped out, burnout is developing into an inferno that students are increasingly struggling to extinguish.

At Trinity students strive to excel, operating within a meritocracy that imposes high expectations and expects personal sacrifices. However, the ascent to the top is far from smooth sailing and it’s a long way down for those who fear falling short of the mark.