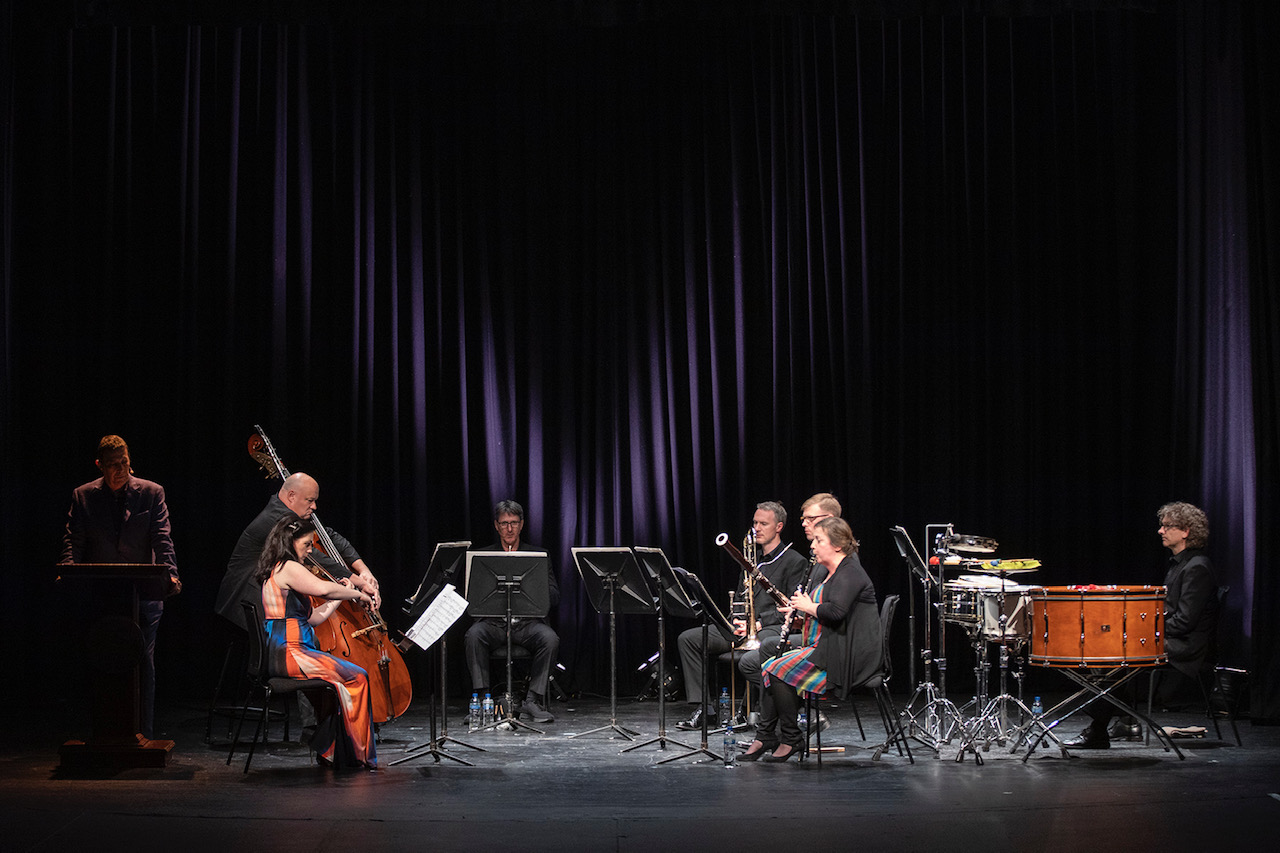 In collaboration with the Fews Ensemble, Smock Alley Theatre presents Igor Stravinsky’s L’histoire du Soldat, a piece of theatre “to be read, played, and danced”. This Faustian fable of a soldier who makes a trade with the devil is directed by Joanne Quigley McParland, a leading Irish violinist and the curator of the Fews Ensemble. The ensemble brings together the finest European musicians and prides itself on presenting audiences with fresh approaches to well-known masterpieces and introducing them to new or lesser known works.

Speaking with The University Times about the show, Quigley McParland said, “it was something that I wanted to do since I studied the piece in college.” She continued, “I’m really really interested in cross-art forms: merging music with drama, or dance, or art – lots of different possibilities”. Indeed, The Soldier’s Tale blends a variety of arts, although “the music is the main focus. The music is really part of the drama throughout, the musicians are all on centre stage.”

After the 1917 Russian Revolution, Stravinsky found himself abroad, in the midst of War, on the verge of poverty. That was when Stravinsky, together with Swiss writer Charles Ramuz, decided to open a small travelling theatre, supported by Werner Reinhart, a wealthy patron, for which The Soldier’s Tale was composed. As a result, the number of performers in The Soldier’s Tale is comparatively small – a modest orchestra of seven instruments and four actors.

Quigley McParland’s production is even smaller with only two performers, featuring Ciarán Hinds as the devil, doubling as the narrator, the soldier, and a few minor characters. The story is narrated in English in an up-to-date translation by British director Jermeny Sams, with a few modifications from Hinds.

Emily Ayers, the dancer and the choreographer of the show, plays the princess towards the end of the show to Stravinsky’s “Three Dances: Tango – Waltz – Ragtime”, which was influenced by the emergence of American jazz, ragtime, and tango. This is the third run of the concert, and each iteration has featured slightly modified choreography,

Smock Alley prefaces The Soldier’s Tale with two performances. The audience learns the history of tango with Histoire du Tango, a composition for flute and guitar by Argentine tango composer Astor Piazzolla, who was influenced by Stravinsky’s music.

The concert opens with El Sombrero de Tres Picos (The Three-Cornered Hat), a ballet with elements of Spanish dance set to music by Manuel de Falla. De Falla knew Stravinsky and was introduced by him to Sergei Diaghilev, the founder of the Ballets Russes, who commissioned The Three-Cornered Hat. Smock Alley’s concert is thus unified through the composers’ knowledge of each other and the theme of dance.

The story of The Soldier’s Tale is based on the folkloric narratives of Alexander Afanasyev. It is a fable about a fugitive soldier who is also a skilled violinist making a deal with the devil on the promise of untold wealth. On his way home on leave, the soldier stops to play his violin and encounters the devil in disguise, who offers him a book containing the secret to untold wealth in exchange for the violin. The soldier makes the deal, unaware that by giving up his instrument he had also traded his soul. The book brings the soldier wealth, but cannot bring him happiness. His mother and his betrothed do not recognise him, and he sets off on a journey where he meets, cures, and marries a princess and gets back his violin, just to lose it all in the end. After all, one cannot outwit the devil.

“We’ve really taken Stravinsky at his word, the only extra element of staging is the lighting. We’ve got some really nice lighting happening,” said Quigley McParland, giving credit to the show’s lighting designer Eoin McCartan. Indeed, the piece is “to be read, played, and danced” according to the composer.

“The thing about The Soldier’s Tale is that there is so much stuff going on for the listeners’ ears, be it the story being told, or the complicated music, that we decided that we didn’t need any other distractions. There was enough in the piece as it was,” Quigley McParland explained.

“The complicated thing is actually the music. For non-musicians, they might not realise the complexity of it, because Stravinsky uses an ostinato, which is a repeated rhythm, but he moves the time signatures a lot, so that you are never in a regular pattern. For the musicians, that is quite a difficult thing to do, especially without a conductor,” she revealed.

“I think the fact that in its small intimate setting, you get to see chamber music, sounding really orchestral at times, you see ballet, and you get this acting, and narration, as well as the combination of a famous Stravinsky’s piece of music with perhaps lesser known ballet and Histoire du Tango is incredibly exciting,” she continued. “You kind of get transported to a different place during this piece. You can’t help but become engrossed in the story, and become part of it.”