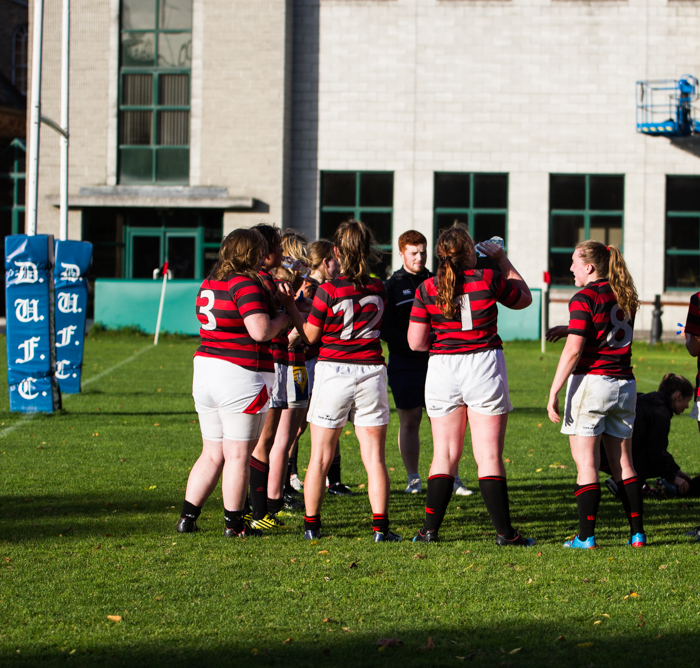 Under the lights at College Park, DULFC won by a single point, 34-33, in what was a landmark encounter between the two sides.

Never before had they met on any field, and the significance of the occasion was seemingly not lost on the players, who floored the throttle from the first minute to the final one.

For DULFC the preseason game garnered additional importance as the newly-promoted side work towards the coming campaign Leinster League 1. With a new coach and the loss of several key senior players over the summer, Oxford were billed a stern test for Trinity’s new-look side.

One debutant of note included full-back Lauren Devitt, a basketball player for Trinity who only took up rugby this year – a fact only worth mentioning because without doing so, one would never have guessed from her more than able performance that this was her first ever rugby match.

Played out in front of a crowd of about sixty onlookers, and after an afternoon of rain, the air was thick with both anticipation and humidity on a September evening not without autumnal chill.

With the dark outline of the college campus sharpened by the dusky yellow sky behind it, and the pav roaring away barely 100m from the sideline, the stage was set for a classic.

The off-field fever reached the pitch in no time. Within minutes, Trinity were a try up: inside Juliet Byrne crossed over for the first of her two tries, and Eleanor Furlong slotted the conversion.

And five minutes later, Trinity were two tries to the good after bundling over on the left flank from close range. The tight angle proved too much for the conversion but Trinity – 12-0 up against an allegedly well-organised Oxford side but whose feathers were now fully ruffled – had their own tails well and truly up.

Oxford, however – who play their annual Varsity match against Cambridge in front of thousands at 80,000 seater stadium Twickenham – are themselves no strangers to the big occasion. It is therefore perhaps unsurprising that it did it take long for them to regain their composure.

The Blues bounced back a mere six minutes after Trinity’s second try, driving up the field with two penalties in quick succession before crossing the line with a flourish after a few phases.

Nor did the five point deficit following the conversion last long – encapsulating a volatility which proved to be characteristic of this high octane encounter.

A mere minute after the restart, an Oxford assault delved deep into Trinity territory. A tumultuous period of turnovers for both sides ensued just metres out from the Trinity try line, but with the help of Oxford ill-discipline Trinity appeared to have weathered the immediate danger and even pushed their opponents back.

Shortly after this display of defiance, aspirations of impermeability were annihilated. A brilliant break and offload by omnipresent Oxford number 8 and captain, Lauren Webb, assisted a second converted try for the English university.

Oxford rang multiple changes for the second half. In part because this was a preseason game and their players needed minutes under their belt; yet it would also be naive to assume this was not also partly to enforce some solidity to their defensive game given how incisive Trinity’s attacks were in the first half.

Initially, the disruption caused by these substitutions outweighed any benefit of their introduction. A gracefully abrasive break – hallmarked by a delightful infusion of trucking tackles and deceiving defenders with fleeting footwork – by tireless Trinity number 8 and captain Tricia Doyle ultimately led to Megan Collis crashing over the whitewash.

The steadfast Furlong did the honours, and Trinity surged to a 24-14 lead.

After what appeared to be an age of attrition in the midfield, the Oxford subs eventually appeared to click into gear. Yet it was a veteran from the previous half who provided the magic. Another superb break and score by Webb, who was decidedly determined not to be outshone by her similarly impressive opposite number and captain Doyle, dragged Oxford back into the contest.

On both sides of the ball, ex-Worcester Warriors Academy member Webb was simply superb. Brilliant at the breakdown, unrelenting tackling, ruthless offloading and blistering pace, she was a handful throughout the contest and the one player who Trinity struggled to ever really contain.

As the French referee aptly summarised after the game: “She was something else. She could not have done more for her team. For me, the best player on the pitch”. It is not the first time the 2022 Varsity Player-of-the-Match had been described in such terms.

Once her score was converted, Oxford pressed for the lead amidst cries of ‘Let’s hustle Blues’ from various corners of the pitch. Each Trinity player played their part in resisting the onslaught, with Trinity winger Jilian O’Toole epitomising the team’s abundant commitment through an important tackle and later turnover in one of many breathless passages of play.

They were rewarded for their defensive efforts with a try of their own. Prop Ashley Palmero bundled over, again on the left flank – the side of the pitch from which Trinity had been gleaning the most joy all game.

However, with the conversion wayward, the score was poised at 29-21. Given the potency of each team’s attacks – and how the pace of the game to that point was likely to only weaken defences in the final quarter of the match – neither side would have believed that with twenty minutes to play the scoreline would remain even moderately stagnant. And so it proved.

Oxford, as they had done all game, spearheaded by the totemic Webb refused to lie down. After another period of sustained pressure, ill-discipline cost Trinity. Several big contributions from Webb at the lineout and in the loose, in conjunction with tiring Trinity legs, led to an overlap on the right hand side which the Blues duly ruthlessly exploited.

The Oxford fly-half’s valiant attempt to convert this score from the touchline pinged off the right hand upright, a near-miss which left her clutching her head in disbelief as she jogged back to her own half.

Yet were she to have known then just how significant this miss was to become to the outcome of the game, it would be no exaggeration to claim that her disbelief would have likely been usurped by despair.

At 29-26, both teams threw their all into the last fifteen minutes. Flanker Ronnie Russell and prop Collis were notable for their endeavours both in defence and attack, but it was Doyle who – not for the first time – proved to be the catalyst for the game’s next try.

Another destructive break – made to seem even more explosive by the comparative fatigue of most her contemporaries from both teams – saw her charge and jink through the weary Oxford line. Her offload to the ever-willing runner Juliette Byrne, allowed the latter to race away for her second try of the game.

Even after a missed conversion, a two score lead at 34-26 with only five minutes to go meant that Trinity may well have deemed themselves in a commanding position – the first time in the game either team could have claimed to have been in this game.

However, the prevalence of any such assumption would have been to unjustly underestimate the interminable spirit of first-year Webb and her team. And those of the Trinity faithful who did underestimate them, did so at the peril of their own palpitations.

An exhausted Oxford launched a final barrage of heavy artillery, the forwards fiercely furrowing downfield. Whilst Trinity were equally fatigued, the women knew they had only minutes to hold out. And hold out DULFC did, repelling ceaseless Oxford offensives in heroic fashion.

How either team was able to function with such commitment after so scintillating a seventy-five minutes was quite remarkable.

Indeed, even when all hope of an Oxford victory was extinguished as the clock ran red, the blue siege retained its fervour – fervour which finally bore fruit when the fly-half dived under the posts.

Though she converted her own score to leave Oxford just one point behind their ever-elusive opponents, it was to be the last act of the game.

Whilst Oxford showed flashes of the brilliance for which they are known, Trinity’s wonderful collective performance was just too much for the tourists – a wholeheartedly team effort which saw them take home a deserved victory.

As both teams exchanged hugs and handshakes, congratulating each other for their part in this titanic contest, the only disappointment that lingered on the dampened turf at College Park was that no rematch was imminent.

However, if a game so utterly enthralling as this was only the first between the two sides, it is nigh-on impossible that either club will allow it to be the last.