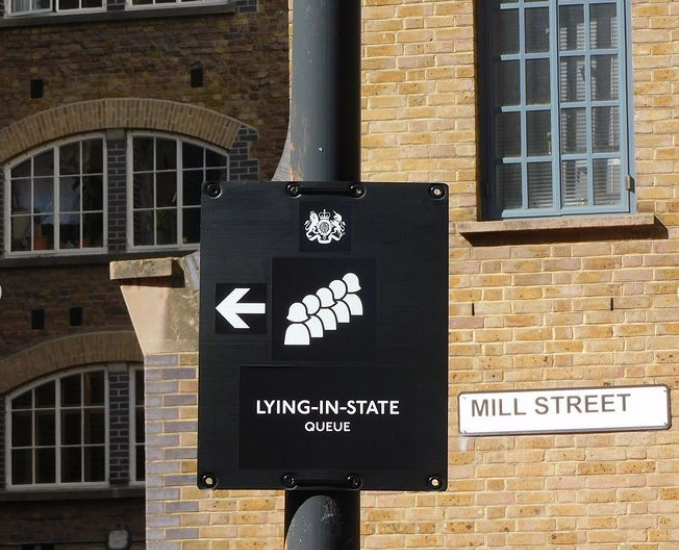 Westminster Hall is perhaps one of the most beautiful buildings in all of Europe. Its strong hammer-beam ceiling and high-flying buttresses reminisce on the great banquet halls of old Viking sagas. However, on my first visit to the famous hall, no one was looking at the fancy architecture. Our purpose was much more solemn.

Queen Elizabeth II had been lying in state for two full days by the time my friends and I reached her casket, where she lay catering to all her adoring fans one last time through an ornately-decorated vigil. She was covered with a crested flag and several bouquets of flowers. With the Royal Crown, sceptre, and orb worn atop the coffin, the late Queen held a  sense of elegance for her last public appearance. Even to those who did not hold the monarch in high regard, the experience was, by all accounts, a moment of discovery. But for me, that discovery did not yield the profound revelations I had hoped for. There was, of course, the majesty of the Hall and the solemnity of the guards situated adorned in gaudy red outfits and even the delicateness of the Queen’s display itself, which all combined to create a momentary blinding flash of sheer magnificence when I first entered. Most were just as impressed as I; after all, they had waited from sun-up to sun-down to see her, and probably were embellishing their feelings to make it all seem worth it. And so, everyone was as thoroughly dedicated to milking the experience for all it was worth just as I had been, ravenously waiting in line to see if my  patience would be rewarded. In the end, however, this high expectation behind the experience doubled as its main issue. It was an affair that relied too much on itself. The perceived mythic power of the Queen was lost on me: When the dust settled after witnessing the explosively magnificent diorama set up in the  Queen’s honour, I realised there was not much else to look at.

Take the Royal Crown as an example: It alone is estimated to be worth between three and five billion pounds. I personally have never touched or even seen that much money, or anything worth that much, ever in my life. The closest I ever came was perhaps watching Scrooge McDuck or Mr. Krabs swim in his pool of money on TV as a kid. Five billion pounds for one old crown being such an impossible thing to imagine, I was shocked into a relatively mediocre reaction when I finally saw it for myself, the same one I probably would have had if I discovered that it was worth a mere five-thousand.

To properly explain, I’ll use the all-encompassing example of the universe itself. The observable universe is 94 billion light-years across, within these boundaries there are 10 million galaxy superclusters, containing 125 billion galaxies, which in turn contain 200 sextillion stars, or 200 billion trillion, if that number is easier to comprehend. But that’s the thing, none of it is comprehendible. Like most people, the most this figure will get out of me is a “huh,  that’s cool”, or, if I were seven-years old again, maybe an “oooooooh” or an “aaaaaaaaahhhh”, when I logically should be doubled over having a  brain aneurysm out of sheer amazement. It is the same for the Royal Crown: the Crown’s price is presented with the necessary pomp and circumstance, but it did not make much difference in the end. It was  so easy to pass over one object in favour of another, constantly seeking a shinier or more majestic sight until the entire thing passed by like a purple, gold, and velvet blur and you suddenly found yourself being ushered out of the Hall’s back door and  told not to stop to take any pictures on your way out.

The experience, once over, helped cement in my mind a figure who had until that point remained cloudy. It was hard for me to express any deep emotional connection with Queen, being an American student who’s only experience with the Queen herself came from immortality memes and learning about how her third great-grandfather made my ancestors so mad that they threw all his tea into the ocean. The Queen, despite her poshness, remained irrelevant in my mind in this way. However, waiting in line for fourteen hours to say goodbye to one particular person gives you a lot of  time and a lot of incentive to think  through that person. I tried my best, in truth, but when it was finally my  turn for a fleeting moment of reflection at the foot of the Queen’s coffin, my mind was empty. I found it impossible to reflect on anything aside from how short the old Queen must have been, based on the size of the coffin, and the impressive age she  lived to. And so I humoured myself with that alone, ruminating on the diet of gold-plated finger food and small children that probably kept Queen Lizzie going all those years.

Yet when thinking about the Queen, it is hard not to find some fantasy within her life. She was, in terms of  being provided for, probably the luckiest woman in the world. Yet, while  some accuse her of being a bedazzled couch-potato who eats taxpayer money for breakfast, lunch and dinner, she remained influential in a number of ways. She was the first Queen to send an email, and the first to send a tweet; she lost her husband; and she remained at the head of the United Kingdom while it grappled with a devastated post-war Europe, a Cold War, and orange-haired American presidents. In comparison with our exam  week and accommodation stress, perhaps it’s understandable that the woman had to settle down for a light snack  of children’s bones once in a while.