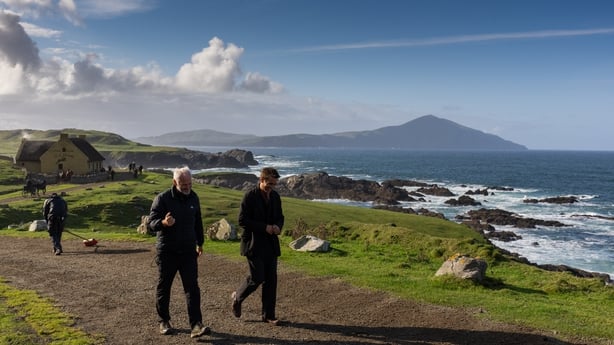 The fracturing of friendship can be a heart-breaking thing, as The Banshees of Inisherin reminds us. Should we sacrifice being liked by our friends in order to be remembered by history? Martin McDonagh’s black comedy drama, which premiered at the Venice Film Festival earlier this year, is a compelling and moving exploration of male friendship, the claustrophobia of small communities, and the extent of desperation in the face of an unanswerable question.

Pádraic Suilleabhain (Colin Farrell) and Colm Doherty (Brendan Gleeson), life-long friends on the fictional Irish isle of Inisherin, have shared pints at the local everyday for as long as anyone can remember. The film opens as Pádraic takes the well-trodden path down to Colm’s house on the way to the pub, when he is inexplicably rebuffed with the statement “I just don’t like ya no more”. And so it begins.

As the film unfolds, Pádraic, pitiful and nonplussed, seeks to discern why Colm broke off their friendship, and to heal it once more. Other characters weave in and out of this pursuit including Dominic Kearney (Barry Keoghan), a tragic village fool in the endless quest for female company, and Siobhán (Kerry Condon), Pádraic’s sister who tends to their house and silently wishes of a life free from the confines of Inisherin.

The film is set against the backdrop of the Irish Civil War, as grenades and the crack of gunfire can be heard from the mainland. McDonagh, however, blurs the divides between sides and emphasises the confusion of conflict. “The Free State are executing a couple of the IRA lads … or is it the other way around?” ruminates Peadar Kearney (Gary Lydon), the village policeman.

This muddying of the complexities of strife is echoed within the ebb and flow of Pádraic and Colm’s friendship – as they teeter on the edge of potential reconciliation, they crash down into an even more insurmountable chasm than before. This micro/macrocosmic parallel, however, doesn’t quite match and is a touch convoluted as the end of the friendship is based on individual grievances, while the Civil War broke out from fundamental political differences.

This thematic lapse is one of, if not the only glitch within the film. The plot remains tight as both Pádraic and Colm spiral in their respective ways. Banshees takes the darker, more sinister turn exactly when needed, precisely as Pádraic’s questioning of Colm becomes more wild, more desperate, and more incessant. And when the film takes its dark turn, it is chilling. Pádraic and Siobhán stand, shocked into silence, as blood drips down their front door.

The Banshees of Inisherin’s true talent, however, lies in the seamless and constant oscillation between humour and heartbreak. McDonagh’s script is brilliant, eliciting raucous laughter from Pádraic’s befuddlement one minute, and silencing audiences with heartrending moments of desperation and sadness the next.

Its treatment of loneliness is just as stirring, with the singularity of the isolated characters highlighted against the vast, ancient beauty of the Irish landscape. The cinematography is therefore equally notable, as cinematographer Ben Davis’ sweeping wide shots encompass the breadth and magnificence of the Irish land and ocean, as well as a few extraordinarily well-chosen close ups, that excellently serve to elucidate the respective characters profound sadness.

The leading actors of the film are a united tour-de-force and the performances of this ensemble cast are a brilliant and deserved spotlight on the Irish film and theatre scene. Colin Farrell has been tipped for an Oscar for his portrayal of hapless and pitiful Pádraic, while Brendan Gleeson is magnificent as he slowly divulges Colm’s existential despair.

There are two supporting actors, however, who deserve a special commendation above the rest. Barry Keoghan is scene-stealing as Dominic Kearney. He is young, foolish, and not the sharpest, yet is a victim to abusive circumstances that give him an aura of profound tragedy and wistfulness. In addition, in Kerry Condon’s performance as Siobhán, she perfectly captures her inner desire to set herself free of the claustrophobic village as well as the conflict that her hopes have with the need to keep her brother company in the safe familiarity of Inisherin.

The Banshees of Inisherin follows Martin McDonagh’s thematic thread within his filmography of dark comedy and a slow devolution into violence. It is a must-see for fans of his work, and a vital viewing for Irish audiences in particular, who are sure to resonate with the familiarity of the film’s community and true Irish humour. It is a powerful film, steeped in grievance and desperation. A film, as Siobhán writes in a letter to Padráic, about “bleakness, loneliness, grudges, and despair”.