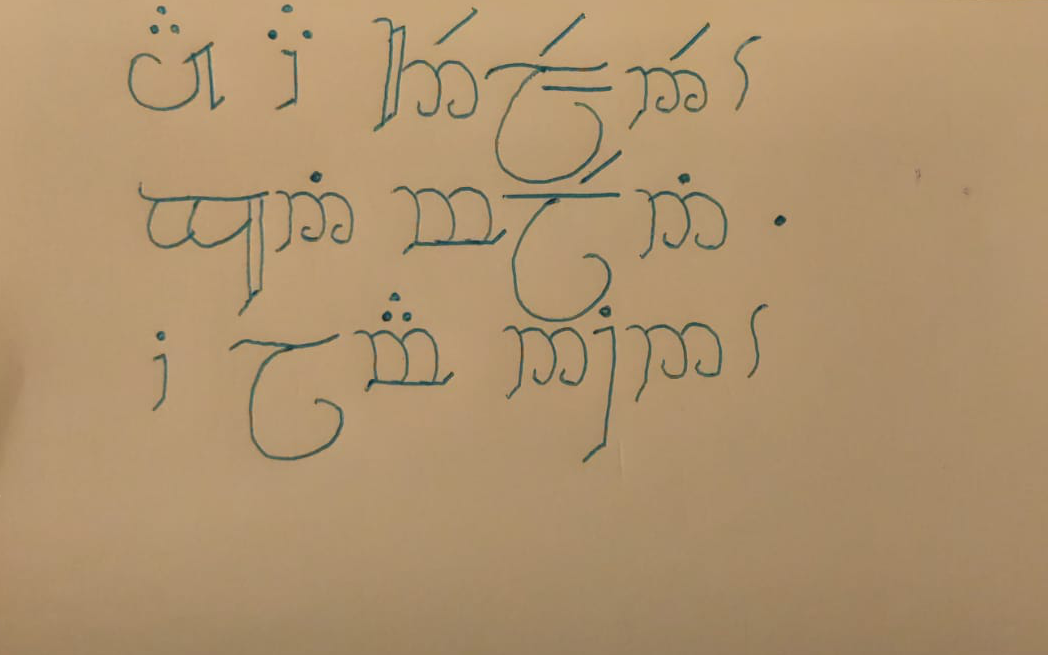 Ai a Edhellen, i Lam Nín: Learning to see a Monochrome World in Colour

I have never seen the world the way most people do. Being colourblind, my world is full of green wood and purple skies. To me the colour wheel is symmetric, and both of the colours that remain are rarely worth distinguishing. Many times I have wondered how another might react to my perception of the world, or how I might react to theirs.

Then I started learning Elvish.

Yes, Elvish. Classical Sindarin to be exact, with a little dialectical flavouring of the wood-elves sprinkled here and there, much like the gems of Donegal and Connemara strewn through my otherwise vaguely Dublin Irish. Add some Spanish and some ASL (American Sign Language) to the mix, maybe a little Italian or Welsh on a good day, and all of the sudden I find myself in the most peculiar situation of being able to distinguish more languages than colours.

So I did what any colourblind linguist would, and I became a painter. Of course, when I dipped my brush I accidentally picked up Sindarin instead of blue, and all of the sudden was left with a beautiful monochrome sky: “Ai a Edhellen! Gin melin, i lam nín!”

Remembering the second colour I quickly hastened for red – that would make some wonderful leaves. But alas I failed once more, and found the words “Céard sa diabhal atá dhá dhéana’ a’d, a amadáin!” scrawled all over the canvas like leaves blowing in the autumn wind. It seemed that I had dipped into Irish rather than red.

To me the colour wheel is symmetric, and both of the colours that remain are rarely worth distinguishing

Now certainly anyone looking at this painting would have taken me for an amateur struggling in vain to copy Jack the Dripper. For by the end I had a bright Welsh sun over vibrant ASL roses intermingling with glowing Spanish sunflowers and bright Italian lilies.

It was about time I realised I was not a painter.

I then asked myself not what it means to see the world in “full colour”, but what it means to see it in only one language, or in many. What does it change when a whole rainbow of languages gives you your choice of words, when a thing may be known not by one name but by seven, each with its own shade and hue? What does it mean to see in thought and poetry, to feel in every word the myriad of perspectives and interpretations that constitute its being?

So I closed my eyes to both colours I could see, and I watched and listened to the languages of the world.

Two of the first words I learned in Sindarin were “estel” and “amdir”. Both might mean “hope”, though those three words have remarkably distinct meanings. The English “hope” is broad: it speaks of a desire that unknown events be favourable, or that good prevail over rising tides of adversarial circumstances. Its primary use is an action: I hope. It is something that is done, a choice that is made and a dedication in the mind.

But to step back, for a moment, to the two kinds of hope Sindarin expresses: estel and amdir. Estel is the sort of hope that does not despair or abandon the one who has it. It is a hope that keeps hoping even in the darkest of times, because it is steadfast and believes in hope for its own sake. It is a hope that gives comfort.

Amdir is different: it is the sort of hope that is based off of reason, that seeks a way for light to come out of the dark not by chance or desire, but because the one who hopes sees a way that the hope can become a reality. Amdir is a hope that invites action and change.

And then to ask the same of Irish? “Dóchas” is “hope” in broad terms, but it is a hope that cannot be separated from trust. It can be put into something or taken out of it, and it speaks not only of a desire for something, but an expectation or trust in it occuring. Yet it is not commonly used in action: “súil”, literally meaning “eye” is the word used to convey the idea of “I hope”. To hope in Irish is to “have an eye” for it – in other words, to see the end you hope for and watch it approach.

Many times and many days I have felt hope in all of those senses. They at times overlap – hope that does not fail, for example, can also be based off of reason. Yet in each I find another way of perceiving the world, another lens through which to understand the reality in which I live.

It was about time I realised I was not a painter

As I walk the world, I see everything in the lenses of the languages I have learned and through the perspectives of the cultures they come from. If I look up at night I see the moon, i ruan and an gealach all at once. To the Sindar I Raun is The Wanderer, one that traverses the sky and whose wanderings define the months. To the Irish an gealach is known for its brightness that shines through the dark of night.

I look up and I see it all at once.

And perhaps this is the view others would be more accustomed to seeing when looking upon a rainbow, flowers, or even a city under a moonlit sky – different hues and shades intermingling, overlapping, fading into eachother even as they stand apart. What colour does for most, language does for me.

They say you cannot create a new colour. That no matter how hard you try, you can never conjure to mind an image of a colour other than the ones you have seen before. I never could, at least, and not for lack of trying. If any others have – well, colours were never exactly my strong-suit, as I am sure you can imagine, and theirs would be a feat that lies on a different path than that one I currently walk.

After all, this question of a “new colour” has concerned me less than that of a new perspective. I ask instead if you can create a new language, and what it would mean to paint the world in its view.

If I look up at night I see the moon, i ruan and an gealach all at once

That’s part of why I started learning Elvish.

Sindarin Elvish is, after all, a construction of Tolkein’s. It reflects a world and a culture so fundamentally different from those of our world that it can speak of lore and beauty in entirely new terms. Yet unlike colours, these new things are something you can actually comprehend, actually see in your mind’s eye.

I can see “i vanadh” – that which is either final doom or final victory. One word that means both, one word that binds them. And such a concept should be of no surprise: to the SIndar who speak to estel and know of hope that would never fail as manadh approaches, it is easy to see how to the end they can see a ray of light and hope that doom will become victory, and finality will once again stand on the side of righteousness no no matter how eminent a dark end seems: because that hope never left, because doom and joyous victory can interchange in the blink of an eye.

Being colourblind, my world is full of Irish wood and Sindarin Skies

So I became a painter of words. I strive not to create new scenes or interpret the world in colour and vision – though such an art is by no means lesser. But I find my amdir and know that my hope for understanding the world comes from the place I know best: language.

I learn, I see, and I even create languages for their own sake. Each one is a new impression of the world, a new way of placing myself and my experiences in it. A new way of expressing myself, and a new shade of meaning I add to every part of the world about me.

I have never seen the world the way most people do. Being colourblind, my world is full of Irish wood and Sindarin skies. To me the trees of languages grow intertwined, yet each one’s leaves speak of a different beauty. Many times I have wondered how another might react to my perception of the world, or how I might react to theirs. But now I know: and it’s about time I learned to see the world in another language’s colour.