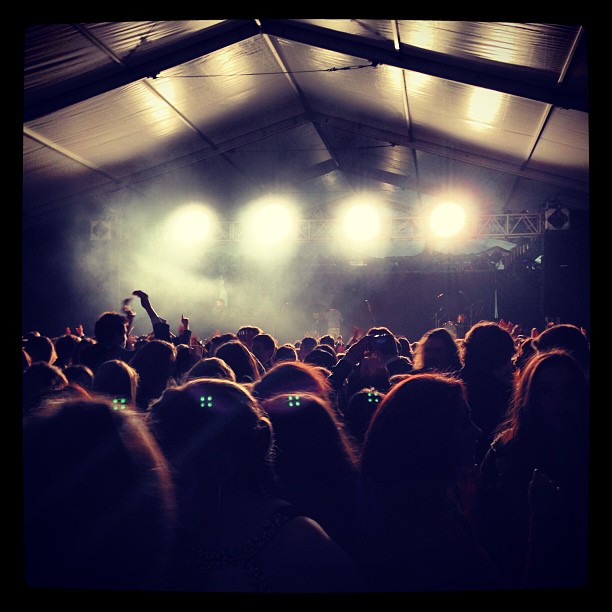 Trinity Ball doesn’t start on Friday, April 17th, 2015. It doesn’t start when the pre-drinks begin, or that morning when the tents go up, or even  a few months in advance when the line-up is revealed. Arguably, like most annual events of its size, the planning for Trinity Ball never really stops.

So how does ‘the largest private party in Europe’ come to be? According to current Ents officer Finn Murphy, the first emails between Ents and MCD Productions go out in August before the academic year, and the two sides meet in September. But this is hardly a meeting of equals. Since 2003, MCD has been almost solely responsible for organising the event itself, with Ents bridging the gap between students and the suits by handling publicity, ticketing, and general information.

As would be expected for such a big ball, there is big money involved. The event reliably generates a huge profit with a percentage of that profit being distributed to the college bodies such as the CSC, the SU, DUCAC, Trinity Publications and the GSU.  In an investigation conducted by Rory O’Donovan for this magazine in 2011, he found that the portion distributed to the college bodies that year was roughly €40,000. However, when he inquired as to the proportion of the profits going to MCD, his request for transparency on the accounts was not fully met, leading him to question the special relationship between Trinity Ball and MCD. He wrote “Whatever the truth that lies behind the mystery may be, there is something extremely skewed about the balance of power that exists between Trinity College and MCD. As the guardians of the Trinity Ball, a lucrative Trinity franchise, the college authorities responsible for it have a clear duty to ensure that in any arrangements, it is the students that reap the benefits.”

This lead us to question how much do we really benefit from the relationship between Trinity and MCD? And could Trinity Ball ever exist outside of MCD?

MCD does bring invaluable expertise to the planning process, being pretty much the only organisation in Ireland with the experience and resources to pull it off year after year. Temptations to criticise the promoter generally have merit, but at the end of the day it’s unlikely that any other organisation in Ireland could maintain the Ball in its current, monolithic form. In the 90’s, when students ran the whole thing, acts were hosted in scenic locales like the Ed Burke, the GMB, and Regent House. Drinks were served in the Buttery, which also housed the toilet facilities. Student stewards took tickets at Front Gate, and the event was altogether unrecognisable from the one that bears its name today.

Despite MCD’s capability in organising an event of such scale however, the most common complaints resurfacing every year involve the quality and supposed value for money of the line-up. Are we just given a random assortment of acts and why does the quality of the line-up vary so much from year to year?

The question of selection often comes back to Ents. How much input do they really have? Finn maintains that the Ents officer can marginally influence the tone of the line-up and make decisions on smaller acts, noting his success in booking Booka Brass Band off the back of their Freshers Week performance. Ents also runs a hugely popular “Battle of the Bands” series in which local student acts compete to open the main stage at the Ball. These types of events ultimately allow individual Ents officers to leave their mark on the night.

It also seems likely that the line-up complaints may overstate their case, putting too much stock in nostalgia and drunken stories passed down through the years. The SU kitchen in House 6 has Trinity Ball posters going back to at least 2003, and few acts (if any) surpass the names brought in this year and last. Calvin Harris came in 2009, but was hardly a chart-topper at the time. The line-ups generally steer more toward homegrown and up-and-coming acts that, on aggregate, create a comprehensively memorable night.

Sure compared to a “good” year, which is presumably just that one time we had Bastille, Imagine Dragons, and Ellie Goulding, this year’s acts are lacking. But it’s worth asking, could this have as much to do with timing and availability rather than the intention to sell cheaper acts for a ticket at the same price? This year’s ball, due to a clash with Easter, is falling a week later than usual, on the 17th, when all the best Irish and UK bands will be performing at Coachella in the US.

Furthermore, while the event is undeniably expensive for students, it is also a truly unique combination of venue, atmosphere, and scale. Ticket prices haven’t deviated from €80 in a number of years, even when the line-ups have been incredibly good or disappointingly bad. And even when the line-up is everything we hoped it would be, it still reflects a significant discount over seeing even a few of these acts individually in vastly inferior venues.

Aside from the cost of acts, it is important to keep in mind the largest portion of the money from ticket sales goes toward things that students hope to think least about on the night itself. Security is handled by a mixture of personnel from College and external contractors, who get paid long hours either side of the Ball to perform the wide range of tasks necessary in order for 7,000 drunken students to party safely. A medical tent is set up to minimise health and safety issues on the night, and the result of all this spending is that the Ball maintains a surprisingly safe, if messy, reputation.

MCD also assumes total financial liability for issues related to the Ball should it be cancelled. Despite being an invaluable source of advertising for Trinity, sources believe College would balk at assuming such massive risk themselves. And even if the odd messianic Ents officer could produce a better night through his or her own work, the quality of the Ball, by proxy of an annual change in role, would fluctuate far more noticeably from year to year, and would on average remain far below the heights it has achieved.

So the choice is not really between Trinity Ball run by MCD or Trinity Ball run by Ents. Critics should recognise that the Ball, as we now know it, truly is a business and thus, MCD will run it like one. For most, the chance to get drunk in your best black tie and dance on the cobbles with the entire college to an array of music acts, big and small, is enough to make tickets sell out every year. And maybe that’s fair. MCD do indeed put on a stunning affair, or at least stunning enough that it usually sells out. Overall, the complexity and expertise that goes into such a massive night requires year-round effort, and students ultimately benefit from having these processes in place. However, while we do benefit overall, there is nothing to stop us demanding more transparency year on year. While MCD have most of the power, they are still a business, and businesses rely on the feedback of their customers. If the ball fails our expectations enough that students stop buying tickets, then the profits will speak for themselves. Until then, Trinity will continue to party on, as it does every year.