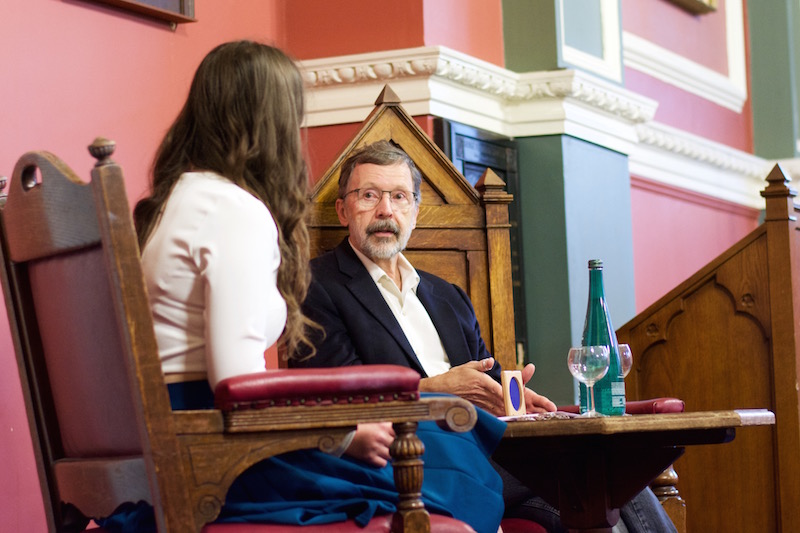 Ed Catmull, one of the founders of Pixar Animation studios, gave a passionate and in-depth talk about the creative philosophy at Pixar to the University Philosophical Society (the Phil) this evening. Many are fond of the films the studio has created; Up was voted the number one movie in many states across America, as an example, so many were keen to have a chance to listen to such a prominent force of the studio.

The crowded chamber of the GMB was a testament to the high level of interest students had in one of the creative minds behind many of the stories that influenced their childhoods.

The talk began with Q&A session with the President of the Phil, Ludivine Beaurepaire, followed by an invitation to take questions from the floor, one that was rapidly accepted across the room.

Throughout the hour he spent fielding questions, Catmull revealed his deep passion and involvement for his craft and business by giving long, extensive answers about the creative process and how he builds a positive creative culture in the workplace so that talent and ideas can flow. For an audience member hoping to hear an apology for the abysmal Cars sequels or about Disney’s purchase of Star Wars and Marvel, they were to be sorely disappointed.

Catmull, who is the current president of both Pixar Animation Studios and Walt Disney Animation Studios, referenced his study of physics at the University of Utah – pointing to the “unfortunate belief” that the sciences and the arts are perceived to be wholly separate. He referred to the view that Pixar shares with the late Walt Disney, that “technology energizes the art”, and the phrase in use in Pixar studios that “the art challenges the technology and the technology stimulates the art”. He emphasised the centrality of the story to the whole process, stating that “technology and art are in service of the story”.

Catmull engaged earnestly with the questions relating to the creative process behind Pixar, particularly when the studio was just starting out. When asked about how he sustained his motivation at the beginning of his career in computer animation, he attributed it to the yearning to discover the unknown within the field. He then went on to talk about how this was maintained by publishing all the technical secrets of Pixar from the outset, an approach not shared by their competitors and one which Pixar continues to do to this day, in order to attract the best minds to their team.

Catmull also drew close attention to the view held at Pixar that fear of failure must be accepted and not be viewed as a totally negative thing. He differentiated between the views held in schools and wider society that failure is your fault – some deeply emotional thing to be feared – with that held in Pixar. At Pixar, that failure must be learnt from, used as tool for growth and ultimately one must be prepared to take some risk and be “OK” with the prospect that it might fail. For Catmull, the idea that “failure is asymmetrical in time” – that failure in the past is good, and to be learned from, and failure in the future is bad – leads to one becoming “risk averse” to their own creative detriment.

One of the defining characteristics of a Pixar film is their emotional impact on audiences young and old. For Catmull, the aim of Pixar is to “connect through emotions”. He then tied this in with how Pixar makes films that appeal to both adults and children. Catmull’s logic behind this is because “children live in an adult world” and want to know what the world that adults understand means in order to learn, instead of being just pandered to.

Finally, when asked an ever-so-slightly loaded question about the number of sequels in recent production by Pixar and how this fits into the creative culture, Catmull said that the aim of Pixar is to have a “2:1 ratio of original pictures to sequels” and that sequels are made because people want to see more of that world, but also because someone at Pixar really wants to do it and develop the story. He exemplified this by referring to the director of The Incredibles, Brad Bird, who only recently came up with an idea worth doing to expand the story – an explanation for the large gap between the two films.

Finishing up, Catmull looked at the so-called “little gems” of Pixar which, in his opinion, should never be touched upon again, such as Ratatouille, Up and Inside Out while acknowledging, without any specific reference, things that were done which he didn’t agree with. I’ll certainly hold him to that if and/or when “Rata-two-ille” or “Outside In” comes out and respectively ruins its original masterpiece.