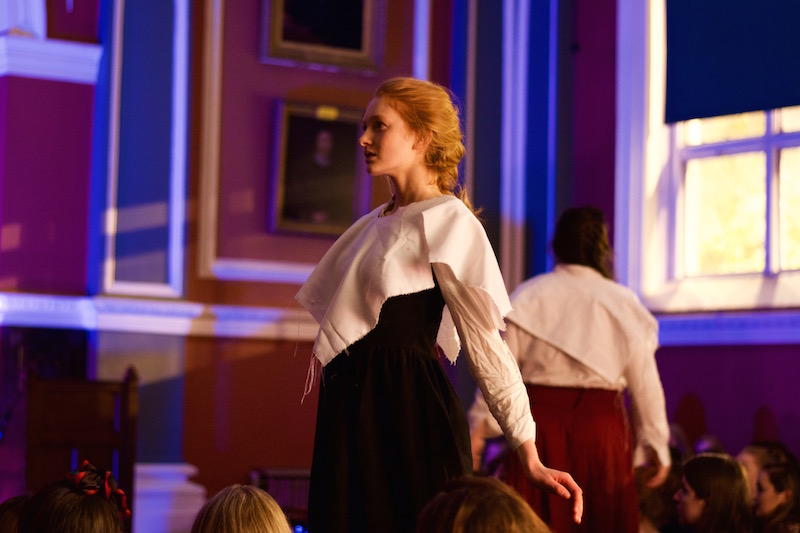 Photo by Anna Moran for The University TImes

The GMB chamber is often a stage for discussion and debate, but on Tuesday evening it became a theatrical stage. DU History and DU Players brought the chamber to life, and transported the audience back to the dramatic Salem witch trials.

Before stepping back in time, Professor Ciarán Brady explained how the witch trials came about. Brady discussed the reasons for the need to act on accusations of witchcraft and what brought these accusations about in the first instance. The professor’s booming voice filled the chamber. Although it was primarily an academic opening speech, the jokes scattered throughout were met with genuine laughter from the audience. He was there to “dampen all expectations”, but only in order “to make [the cast] look better”. Brady’s talk went on for forty minutes without dragging, which is an achievement for any lecturer but particularly for one addressing students of various disciplines. The only part which did feel drawn out was the prologue to the reenactment, but these were not Brady’s own words. His lecture was informative yet lighthearted.

As the professor descended from the podium the lights dimmed, and four women entered the room. The chamber was filled with high-pitched giggling and an echoey narration which transformed into hysterical screaming as the witches flung themselves at the audience and mounted chairs. As the possessed left the room the judges entered followed by the witches, and two men who spoke in their defence.

The trial lasted for less than half an hour, but in that short time the cast, a mix of DU History and Players, provided a convincing reenactment of a trial. The lights, although minimal, allowed the chamber to become eerie. The voices carried through the room to allow the audience feel as though they were privy to a real court. The costumes were simple yet effective. The Salem Witch Trials were brought to life by the lecturer and the cast. The event was a perfect mixture of academia and theatrical performance as they worked flawlessly together yet neither overshadowed the other. It had promised to be an event not to be missed, and it fulfilled that promise.