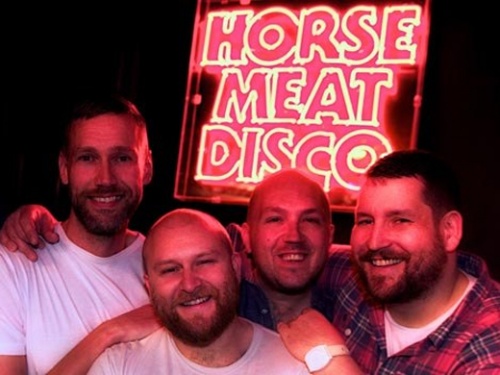 Disco as a genre has always stood for inclusion, having fun and making it all about the music, and there are no better representatives for these principles than Horse Meat Disco. In the 12 odd years that this four man DJ collective has been around, James Hillard, Jim Stanton, Filthy Luka and Severino have been bringing the joy of disco into people’s lives not only at their residence at Eagle in South London, but in clubs all around the world including in Dublin. They have garnered a reputation for throwing stellar parties and playing sets that are as accessible as they are unique. These guys take their cues from the New York gay scene from which disco originally came and through them its spirit of acceptance and commitment to having a good time lives on. They have released a number of complications and unearthed no end of underappreciated gems from a bygone era. Their last release was the 2014 compilation, Horse Meat Disco IV.

Over the course of a five-hour set expect to be treated to only the cream of the disco crop from a group who have made it their lives’ work to getting people dancing. We will be treated to a mixture of classics like Donna Summers or Patti Labelle and some unknown tracks, expertly chosen. Horse Meat Disco will make the Lounge a must visit for everyone at Trinity Ball and you do not have to be a disco expert to appreciate the good vibes and buy into their infectiously positive and welcoming approach to music.

Katie Cogan is Entertainments Officer of Trinity College Dublin Students’ Union and is the lead organiser of Trinity Ball.