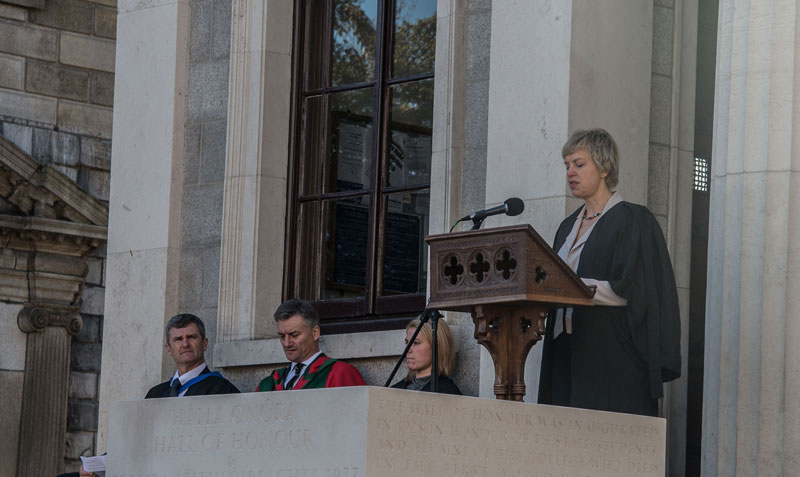 Senator Ivana Bacik served as TCDSU President from 1989 to 1990.
Anna Moran for The University Times

Politics is an important part of student life. For some, it’s about believing strongly in a cause. For others, it’s about becoming actively involved in the college political scene. The position of President of Trinity College Dublin’s Students’ Union (TCDSU) is one that tends to be hotly contested and receives large amounts of attention both inside and outside of Trinity’s walls. It’s a daunting job which involves a year-long paid sabbatical, during which time you often act as the voice of the entire student population.

Lynn Ruane’s announcement late last year that she was running for election to the Seanad threw the world of student politics back into the national spotlight, and has started a discussion about how big the leap is from student politics to national politics. With the TCDSU elections just over, and with a general election taking place today, one has to wonder what has happened to all those strong-minded could-be politicians who have graced the halls of House Six over the past few years.

One of the most notable figures to move from the position of TCDSU President into the national political scene is Ivana Bacik, who served as President from 1989 to 1990. Bacik currently serves as a Senator on the University of Dublin panel and also holds a prominent position in the Labour Party within the Seanad. Speaking to The University Times, however, she said that this wasn’t always her plan.

“I wanted to go into law, which I did”, she says. “I went over to London after the SU and practised and taught law there for a few years before I came back and actually only went back into politics in the late 90’s, about ten years later.”

Bacik’s time in the union was a turbulent one. Within a few weeks of her being elected president she was threatened with legal action for providing information on abortion.

Bacik’s time in the union was a turbulent one. Within a few weeks of her being elected president she was threatened with legal action for providing information on abortion. This action was taken by Society for the Protection of the Unborn Child, who were eventually successful in their case against her. It wasn’t until the 1990s, long after Bacik had graduated from Trinity, that this issue was resolved. Far from discouraging Bacik, this only served to make her more passionate about politics: “It certainly made me angry. That is the issue that brought me into politics really and has kept me in since.”

While a very strong leader with extensive experience in national politics, Bacik doesn’t shy away from the difficulties that faces any union president. She says: “You’re coming in as a 20 year-old to run a big organisation and it can be very daunting. It’s very exciting too and it is very democratic. You have to answer to your constituents every week at union exec and council meetings. It’s great training. I don’t think any other type of politics is quite as intense because you’re so young and you’re surrounded.” Bacik ultimately resigned as President in 1990, when it was discovered that she had broken mandate regarding voting for Union of Students in Ireland (USI) candidates.

Despite the difficulties that came with her first foray into large-scale politics, she remained within politics and has been a strong voice on issues such as LGBT rights, abortion and education. Bacik believes the way students have acted recently on these issues is a testament to the work done by many organisations within the college set-up, calling it a “really proud feature of the student movement in Ireland”.

Despite this, Bacik doesn’t believe the student vote will be as key an issue in the upcoming general election, saying: “It’s hard to see it being quite such a factor as it was say in the marriage referendum.”

Former TCDSU President Rory Hearne is running for Seanad election this year alongside Ruane, hoping to gain one of the three seats allocated to the National Universities panel. Since leaving his position as President, Hearne has remained a key voice on the political front. While currently a senior political analyst at Think-Tank for Action on Social Change, Hearne served as one of the founding members of the left-wing political party People Before Profit. The party was set up in 2005 and seeks to mobilise the general public with the final aim of redistributing wealth from the few to the many.

Hearne served as president from 2000 to 2001 and during his time in College he focused largely on social issues, as seems to be the trend for many presidents. During his term Hearne organised protests against bodies such as the International Monetary Fund (IMF) and tried to raise student awareness around issues such as globalisation, refugees, abortion and education.

Speaking to The University Times, Hearne states his motivation behind running for election was a chance to “make student politics much more activist-oriented rather than just simply being a kind of social club for the insiders”. He continues: “I was very much coming from the outside and wanted students to be active politically and involved. Not just to make a better college but a better society and student life as well.”

Hearne’s tenure included boycotts of the canteen and the occupation of student buildings, all with the aim of raising awareness for the issues he championed. He is keen to point out that if forces within the college and on the national stage are willing to engage students, students are equally willing to listen and try to bring about substantive change: “I think that students tend to be a lot more idealistic in terms of demanding and looking for a better society. They’re not as individualistic. They think bigger about society. They think bigger about what type of country we have and what kind of country we want and I think that’s really important. It’s often lost in general politics by the mainstream established parties.”

Hearne is keen to encourage anyone to run for a position in the union, whether they see themselves with a future in politics or not. “We need people, ordinary people, to believe in students and to get involved and take the lead because they generally tend to be much more open and they’re genuinely committed.”

Hearne remains dubious, however, about the impact students will have on Friday, though he points out that poor student representation would not be through any fault of their own. He believes that politicians have largely ignored the student vote in the past and that this is a mistake. He is also highly critical of the fact that the election is being held on a Friday stating that it “should be on a day that everybody can vote”.

So where does the future of student politics lie? At the moment, many see it largely in the grasp of Ruane as she sees out her time in Trinity and looks ahead to the upcoming Seanad election. Ruane’s time as TCDSU President has seen a remarkable increase in interest, from not just students but also the wider media, in the political journey of a person from a college setting to the national stage. Speaking to The University Times, Ruane states that one of her proudest achievements so far has been mobilising groups of students who were previously uninvolved in student politics. She also emphasises the fact that you don’t need to be involved in student politics all the way up to make a true difference: “It’s good sometimes to have an outsider to come in and maybe have some fresh ideas and not be too caught up in the bureaucracy.”

Ruane acknowledges how well her time in the union has set her up for what the future holds and agrees that her time working with students will help shape and mould her future policies: “I’ve learned a lot in the past six months from students and I would consider myself in a very unique position that maybe not every SU President does but because of my background I’ve had a lot of opportunities and doors opened for me. I’ve had a lot of time with different groups learning lots of different things.”

She also has a strong belief that the student vote will be crucial in the upcoming election. By engaging students now when they’re full of passion about what is happening around them, she hopes we can create a generation of people who seek to hold the government to account and create a more equal society. “I think once you’re politically engaged. It’s like the wheel of addiction, you can’t go back into denial.”

While these three individuals may have served the college at different times and found different paths into the world of politics, the overall message is one of involvement and empowerment for a group with big ideas but generally also small voices when it comes to electing a government.