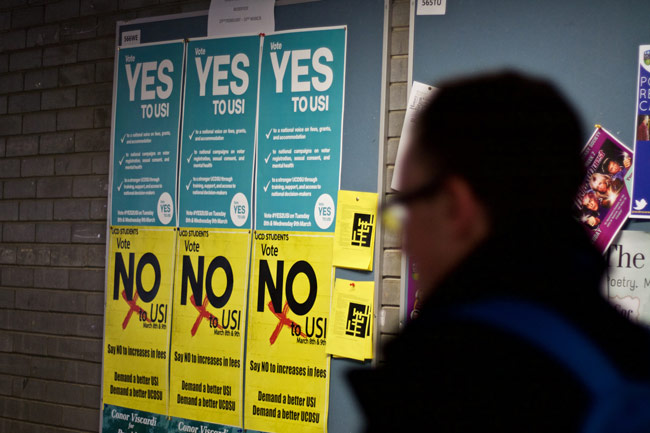 The referendum was brought after a student-led petition collected over 900 signatures. Grace Williams, the national chair of Labour Youth and a postgraduate student in UCD, led the “Yes to USI” campaign, which focused on how USI could give UCDSU a national voice. The campaign emphasised the importance of being part of a national movement in light of the third-level fees debate, the government higher education working group, and the accommodation crisis as issues that USI that UCD could have a stronger platform on if they had joined USI.

A “No to USI” grassroots campaign was set up and gathered steam in the last week, with a strong online and on-the-ground presence. The campaign objected to the referendum being held in the first place and called on students to vote no because the referendum had been “rushed” and called USI an “undemocratic and ineffective organisation”. The campaign also objected to the referendum bypassing class reps and UCDSU’s council. They advocated for “real reform” within the organisation and a longer run-up to a referendum. The campaign, however, was marked by several inaccurate Facebook posts, such as one with entirely inaccurate figures comparing USI’s national voter registration efforts and UCDSU’s.

Speaking to The University Times about the results, Megan Fanning, one of the leaders of the “No to USI” campaign, said: “The win was unexpected. We weren’t expecting it to be as large a margin. USI ran a very good campaign. We were completely taken aback.” Speaking about the future of USI and UCDSU, she stated: “The reforms we campaigned for, we will continue to campaign for because we believe in a national students’ union but we believe in one that is effective, democratic and transparent. We don’t believe USI in its current form is justifiable for the cost it incurs.”

Speaking to The University Times, Williams spoke of her disappointment about the results of the referendum: “I don’t feel like the student vote today has rejected USI as an organisation. The vote today has very much rejected the organisation that the no side invented.” She went on say: “I’m actually quite surprised that the no side didn’t do better considering their campaign. They ran a very a strong campaign.”

Speaking about her hopes for the future, Williams was positive about the scope for discussion in the future, citing the number of students who voted for “national representation”. Williams was critical of the “silence” during the campaign from UCDSU and stated that “the lack of an impartial information campaign allowed misinformation to be spread”.

Students were asked the following question: “Shall UCDSU affiliate to the Union of Students in Ireland, subject to an increase in the Student Centre Levy of €5 per full-time student and €2.50 per part-time student?” There were 2,921 valid votes.

The 2013 referendum to disaffiliate came a year after UCDSU faced financial difficulties due to poor accounting practices. Those who campaigned to disaffiliate at the time emphasised the need for UCDSU to stay focussed on local issues as opposed to national ones, though the debate also featured criticism of USI’s structures and democratic procedures. The debate also featured an agreement between then-President of UCDSU, Rachel Breslin, and USI about five structural reforms, three of which have been implemented, and two of which they have made significant progress on.

UCDSU disaffiliated from USI one year after the referendum passed. UCDSU sent a delegation to USI’s national congress that year, which took place just two months after the referendum passed. At this congress, the UCDSU delegation walked out in protest against the lack of time given to a motion concerning USI’s affiliation with anti-austerity groups. However, Breslin cited a hostile atmosphere and the feeling that they were unwelcome as reasons for walking out.

The President of USI, Kevin Donoghue, could not be reached for comment.

Eleanor O’Mahony and Edmund Heaphy were reporting from UCD.