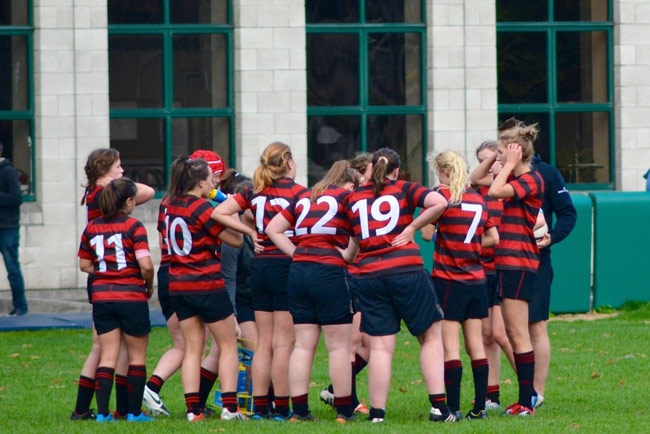 On Wednesday, College Park played host to both of this years colours rugby matches, with the women’s rugby team getting the day’s action going at 3pm. A sizeable crowd had gathered along both sides of the pitch for the kick-off, and with the UCD contingent making their presence known, the atmosphere in turn attracted curious passers-by on their way to and from the Hamilton. The sheer visibility of College Park certainly helped attendance and the conditions were perfect for rugby, crisp and windless, even if the pitch was showing some signs of wear and tear at this late stage of the season.

Trinity Captain, Niamh Byrne, made light of the uneven surface and UCD’s defence right from the kick-off with a break that showcased her speed and saw her score under the posts to guarantee an easy conversion. The 7-0 lead was a dream start for the home side but UCD’s number 11 looked lively on the ball and made several threatening breaks down her wing to keep the Trinity back line on their toes. Then all of a sudden UCD changed their angle of attack and a series of crash balls through the centre of the park saw Trinity concede a penalty in a dangerous area. UCD duly converted to reduce the deficit to just four points. The score rattled Trinity’s organization and when UCD turned the ball over on the halfway, confusion reigned as a probing kick bounced in the space behind the Trinity line. For a moment it looked certain the side in light blue were in for a try, but an excellent recovery tackle, snuffed out the danger.

Trinity re-asserted their control over the game with a series of excellent passing moves and individual breaks, in particular one weaving run from outhalf Katelyn Faust to carry the ball to the twenty-two. The backs were all running well with the ball and after a timely offload drew in the UCD defence, Trinity just fell agonisingly short of the try line, but kept turning the screw. UCD conceded a number of penalties in the face of the onslaught and managed to hold the ball up when Trinity did cash over the line, but the respite was only temporary.

Once again it was Byrne who made the breakthrough after some excellent play saw the ball spread out wide and while UCD tackled three ball-carriers they were helpless to stop the captain from scoring in the corner when she appeared on the overlap. While the conversion from out wide was missed, UCD were temporarily reduced to thirteen players after two yellow cards for high tackles. Trinity probably didn’t want the half-time whistle to come at all, with both momentum and numbers on their side but when it did they went in well worth their 12-3 lead.

The second half saw UCD kick off and when Trinity’s second row caught the ball and carried it forward tech defence were no doubt expecting her to go into contact but with a deft sidestep she left her tackler for dead and drove into the UCD half. Unfortunately, such moments of quality attacking play became less regular for Trinity in a very open second half. With neither side able to put together the sort of passing moves needed to break down a determined defence the game was punctuated more by individual breaks then flowing team play. Handling errors crept in, especially for the Trinity side, who were struggling to keep up the intense physicality that had served them so well in the first half. A UCD intercept undid a lot of attacking effort and was only just hauled down metres from the try line by the indefatigable Byrne, but it signalled a shift in the UCD mindset. They encamped on the Trinity line and despite some huge defensive hits from the home side, they managed to turn territory into a try to bring the score to 12-8.

That was the difference between the two sides in the late game, as Trinity responded with an extended stay of their own inside the UCD twenty-two. Byrne made a sensational break down the wing in front of the home fans and was stopped just short of the line by a last-ditch tackle. As the ball was worked across the face of the UCD try line, the defending team conceded one penalty after another but somehow Trinity conspired not to score. UCD clung on to keep within a try the victory, and they were greatly helped by Trinity’s failure to take advantage of a glaring overlap on the UCD flank nearest the Pav. With five players queuing up to face two UCD defenders, Trinity repeatedly brought the ball into contact on the blindside and repeatedly, they were shut down.

Still, it was an immense physical effort to keep making tackles and covering ground this late in the game, so when Trinity finally conceded a penalty for holding on, it was remarkable to see a UCD player take a quick tap from inside her own twenty-two and set off down the pitch, completely in the clear. Tired legs scrambled to chase her down as the fans from both sides went wild. It was the home support who were cheering loudest when the solo beak was stopped short of the line and when Trinity regained possession, the realisation that there could only be moments left in this thrilling contest rippled through the crowd. With the ball on the twenty-two and in Trinity’s hands, the referee may have whistled to indicate that time was up, and that the next time it went out of play the game would end, but the noise was so raucous it was hard to be sure.

What happened next was the sort of unscripted drama that only sport can offer up. Trinity retrieved the ball from a ruck, turned, and kicked for touch on the near sideline, just down from the Players Theatre car park. The ball sailed comfortably over the heads of the sky blue side and bounced towards the line, with spectators visibly urging it forward again. It obliged, this time bouncing no more than a metre from the line. But it had landed on its oval end and hopped back from the brink, straight into the grateful hands of the UCD wing. On such vagaries are games won and lost, and for a moment, College Park fell completely silent, with players and spectators alike unsure what had just happened. Then, a cry of “Chase it!” from the Trinity Bench broke the spell and teams snapped into action again. UCD’s wing showed breathtaking speed to cut through an exhausted Trinity defence and broke tackle after tackle to score in her far corner. 13-12 to the visitors, the referee blew the final whistle and as if on cue, the rain started to fall. Trinity can be immensely proud of their effort and it is no exaggeration to say that with the bounce of a ball they could so easily be celebrating a colours victory themselves, and against formidable opposition.