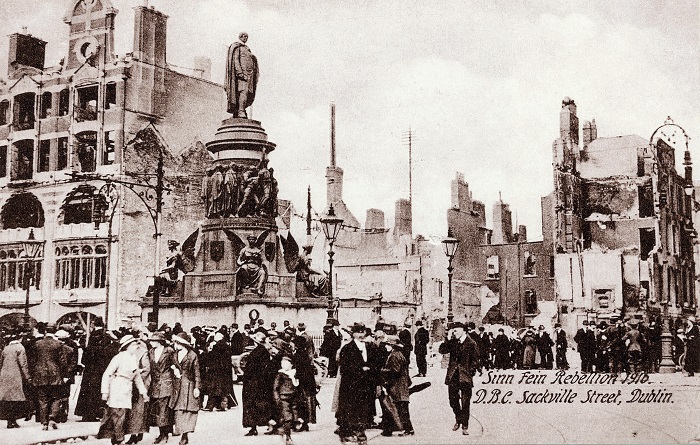 The Old Library in College is generally associated with volumes of medieval manuscripts, obscure maps and the prized Book of Kells. The variety of documents housed rarely draws attention to itself in ways as effective as those of the Changed Utterly blog and the exhibition the library has been hosting over the past year. Both projects have become prominent in the lead up to the centenary celebrations of the 1916 Rising. The collection consists of a number of diverse pieces, ranging from eye-witness accounts of the Rising to memorabilia collected by the stunned inhabitants of Dublin. The exhibition also takes a look at the Jubilee celebrations of the Rising, examining the differences in remembrance and attitudes of the martyrs in a fascinating social study.

Speaking to The University Times, Estelle Gittins, one of the organisers and curators of the blog and exhibition, describes the collections held by the College library: “What we have got is a very interesting breadth and range of different sorts of items from objects like the cup, or Thomas Bodkin’s ambulance driver’s armband, through to letters, through to reports from the officer training corp, or things very functional, like military records.” She describes this collection as “disparate” and hopes that this is what will attract visitors to the exhibition: “We wouldn’t necessarily be known as the first place to come to for researching the 1916 Rising and we wanted to change that and that’s why we set up the Changed Utterly blog.”

“It’s a chance for us to show off our stuff I suppose and really act as catalysts to research. The whole reason behind the blog is promoting our collections and generating interest and engagement on Twitter, raising the library’s profile”, comments Shane Mawe, Assistant Librarian in Early Printed Books, who works on the project in conjunction with Gittins. Indeed, the effort seems to be paying off. Gittins comments on the noticeable increase in students requesting to view material from 1916, having drawn inspiration from the Changed Utterly blog: “It’s been great seeing people in the reading room. It really, really is fabulous walking down the stairs and seeing two or three people – students – looking at the 1916 material we’ve written at on the blog … you feel very connected to the research which is what our function should be, that’s what it’s all about.”

It’s no small wonder that the blog has excited so much interest, given the fascinating snapshots into Dublin life during the time of the rising in the collections. Gittins speaks enthusiastically of the insights offered by some of College’s archives: “We’ve got the papers of Denis Johnston, the writer, which is a huge collection. He was 12 in 1916. And his house was taken over by the rebels and he kept a scrapbook and a diary and so we have a blog post on that aspect.”

The blog has generated further interest and donations. Gittins says: “We’ve also received donations of material since the blog started up, another really famous account, published in the 60s by Lily Stokes. She heard what was happening and she went out and walked around to see for herself – which was quite dangerous – and then she wrote everything down.” Stokes’s family, specifically her great nephew, donated the original typescript account to the Library, Gittins explains, adding: “She was actually a cousin of Elsie Mahaffy’s [the daughter of then Provost John Pentland Mahaffy] so she came here to Trinity for tea and she heard about the battle at Mount Street bridge from a member of staff and she walked back to see what had happened.”

People were passing news from one doorstep to another and that was how it was getting through, because the newspapers weren’t being printed let alone circulated

Despite the miscellaneous nature of College’s collection, it is extremely effective in conveying the level of impact of the Rising across the country. Gittins talks about the confusion in the city the documents convey: “People were passing news from one doorstep to another and that was how it was getting through, because the newspapers weren’t being printed let alone circulated. And letters weren’t getting to people, so it was very much based upon rumour.”

She recalls one specific anecdote from the collection: “[In] one of the Frederick Kidd letters he talks about, ‘Oh the GPO’s fallen apparently and all the rebels are out of it’. And so he sends his son up to O’Connell St to have a look and his son comes back home saying ‘Nope, still there’.” It’s letter that is not only interesting, but also provides historians with knowledge on how information was passed around during the Rising.

The role of College in the Rising is receiving more attention than in previous years, Mawe explains, comparing the resources available in the lead up the event’s centenary to those available at its 50th anniversary in 1966. “At the time, if you think about it, we were physically halfway between St Stephen’s Green and the GPO, right in the middle of the action here”, he says. “Yet you know, in ‘66 it was glossed over to some extent. I think there was a lecture on in the Thomas Davis, but that was all.” In the meantime, the interest in the role of the College in the Rising has risen with student engagement with the commemorations.

The library’s collections display a striking series of photographs of British troops in Front Square, among others. Gittins explains: “When the Rising first was first reported in College, the doors were locked and the OTC [Officer’s Training Corps] were called in and there were some accounts at the time and so they defended college for about 24-48 hours before British troops arrived.”

Gittins puts the obscurity of the role and experience of the students and staff of the College during the Rising down to a lack of information: “You’re relying on those people to keep their documents, or to write their memoirs, or to put it out there. So who knows, there may have been lots of politically active students. But we don’t know about it because it hasn’t survived in the historical record.”

She does, however, relate the story of student Eileen Corrigan, who made her way down to Trinity for an exam on Easter Monday: “She was a student from Belfast and she made her way down on the train from the North after her Easter holidays because she had an exam on Easter Monday. And she made her way across town, as everything was kicking off, and into Trinity for the exam and heard gunshots while she was having her exam, and came out and the doors were locked.”

Aside from the unique insight into the experience of the College and citizens of Dublin that the exhibition and blog provide, the project takes an interesting look at the role of celebration and commemoration of the Rising throughout the years. John McMahon is in charge of the web archiving project, an initiative to preserve some of the commemorating projects of 2016 for future generations. Speaking to The University Times, he commented on the difference between the current commemorations, and those that took place 50 years ago: “1966 was a much more reverent, grave approach as far as I can see.” The current exhibition includes a copy of the RTÉ Television guide from 1966, featuring back to back documentaries and programmes about the Rising. “Certainly if you look at that RTÉ guide, at what’s on television”, Gittins says. “You get a good sense that it is very much about remembrance and it is very reverential. There was more of an importance placed on parades and church services.”

You’re relying on those people to keep their documents, or to write their memoirs, or to put it out there

McMahon attributes this difference in approach in part to the proliferation of information and accessible platforms of expression facilitated by the internet: “I think what you’re seeing now is multiple narratives, whereas before there was one grand narrative going on. Now because of how the country has changed and because of the way technology is facilitating people telling their own stories, what we’re seeing now is everyone laying claim to the story of 1916.”

He continues that, “because primary sources are being digitised now, people can go back and read contemporary diaries and make up their own mind, whereas before it was always dealt with by historians who might have had a particular angle. How we refer to it, what we call it, how we perceive it, that’s all up for discussion now in a way that it wasn’t before”.

The project involves collating the different websites involved in the 2016 commemorations, in order to preserve them for future generations. “In Ireland there is no legislation for web archiving for the .ie domain. So there’s nothing to collect all the websites that have been produced to commemorate 1916”, McMahon explains. “So last year we got together with our comrades in Oxford to begin archiving websites. It’s a snapshot of where we are at the moment in terms of commemoration. So if you look at the 1966 commemorations, it’s much more reverential. Whereas now, it’s much more community arch-type, it’s much more diverse, so I thought it was interesting to capture that as a snapshot in time.”

Mawe expresses enthusiasm for the level of engagement the project has received online, both on the blog and on the exhibition’s twitter page: “I kind of got this notion that we should get to 1916 followers on Twitter, we hit 1800 the other day. That’s kind of fun, but it does also generate a good level of engagement.”