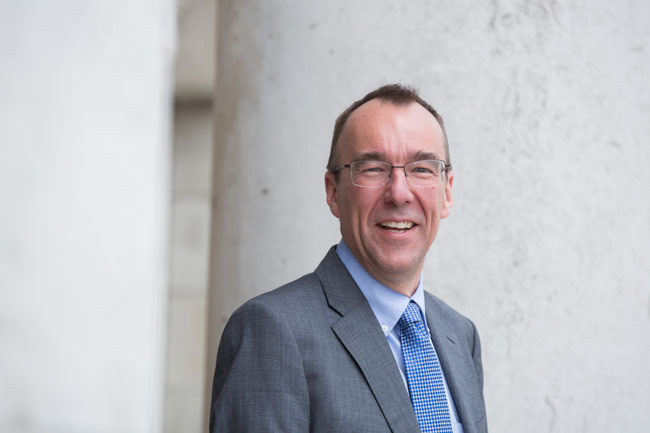 In an unprecedented rise, Prof Chris Morash, who only joined Trinity in 2014 and was appointed Head of the School of English in 2015, has been appointed Trinity’s next Vice-Provost, and will take up the position on July 4th.

The appointment was approved by the College Board today.

The Vice-Provost serves as the Chief Academic Officer of the College and is focused on academic oversight of Trinity, chairing a number of important committees including the Planning Group and the Heads of Schools Committee.

In a press release, Morash emphasised the “challenging time” that Irish higher education is experiencing at the minute, but added that “challenging times can be opportunities both for change, and for deciding what is important to defend”.

“I’ve been waking up every morning with a sense of the challenges and the possibilities of this post. And, at a personal level, as a Canadian-born Vice-Provost, there is a sense of making history in a small way – and that’s exciting as well”, he said.

This appointment as Vice-Provost is the latest achievement in Morash’s rapid rise through Trinity. Only a year after being hired as Trinity’s Seamus Heaney Professor of Irish Writing in 2014, Morash was promoted to Head of the School of English.

Morash, who is from Nova Scotia, Canada, came to Trinity as a student in 1985, and joined as a staff member from Maynooth University in 2014, where he helped found the Centre for Media Studies. Morash, who also sits on the board of the Smock Alley Theatre, has published histories of the Irish theatre and of Irish media, two of his main areas of academic interest.

Provost Patrick Prendergast, who nominated him for the role, congratulated Morash on his appointment. In a press release, Prendergast said: “I know that Chris will bring a great deal to the new role. His appointment comes at a very exciting time for Trinity in terms of teaching, learning, research and innovation. It is also a time of tremendous challenge for the university in terms of funding that will be a priority for us in the coming months.”

He also thanked the current Vice-Provost, Prof Linda Hogan, whom he praised for showing “such commitment and energy in the role over the last five years, leading with reform and innovation for the benefit of the university.”

Hogan led a significant number of College reforms over during her five years as Vice-Provost, including the implementation of a tenure-track employment model for entry-level academics, and as the driving force behind the Trinity Education Project.

Writing in The University Times in March, Hogan said that the aim of tenure-track is “not to fix a broken system, but rather to enhance an already strong one by providing a more streamlined, consistent, robust and supportive framework”.

Speaking to Trinity College Dublin Students’ Union (TCDSU) Council about the Trinity Education Project in February, Hogan emphasised that the aim of the project is to “streamline a lot of our systems” and “constantly improve”. Led by Hogan, the project, which is still in its planning stages, has been trying to develop what an “undergraduate program should look like in the future”.

Morash will take over from Hogan as Project Sponsor of the Trinity Education Project.

In his time in Trinity, Morash has already shown a willingness to challenge entrenched forms of assessment. Over the past year, Morash has moved the School of English away from an exam-based approach. Speaking to The University Times last year about the shift, he described the school’s previous assessment method as “some kind of random ratio of 50 per cent exams, 50 per cent essays”, and he has instead encouraged lecturers to assess materials the way they felt was most appropriate.

Morash currently serves as the Chair of the Royal Irish Academy’s Culture and Heritage Policy Sub-committee. He was also the first chair of the Compliance Committee of the Broadcasting Authority of Ireland (BAI) when it made a controversial decision about the discussion of marriage equality on news and current affairs shows.

Correction: 18:42, June 15th, 2016
An earlier version of this article incorrectly stated that Morash was the current chair of the Compliance Committee of the Broadcasting Authority of Ireland. In fact, he finished his term at the beginning of 2015.