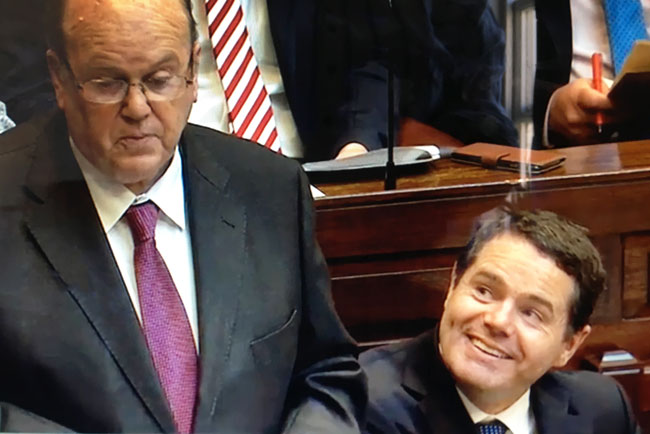 Today’s budget announcement saw €36.5 million in funding provided to higher and further education, the “first significant investment of resources in HE since our economic collapse”, as well as the expansion of the rent-a-room scheme.

The budget also saw the introduction of a full maintenance grant, worth nearly €6,000, from September 2017 for postgraduate students in the lowest income category.

Announcing the investment in higher education, Minister for Public Expenditure and Reform, Paschal Donohoe, stated that it was important that we invest in education as the “lynchpin of our economic success” and stated that he was “committed” to building on the investment announced today. Donohoe described education as the “bedrock of our society” and referenced the positive impact of the “historic decision” to increase the number of those continuing on to third-level education. Donohoe also referenced the importance of “investment in education” as part of the economic recovery.

Referencing third-level students and the “acute shortage of new houses being built in Ireland”, Minister for Finance, Michael Noonan, announced that the government would continue its rent-a-room scheme, extending the income-tax relief from €12,000 to €14,000.

Irish higher education institutions are seriously underfunded, currently facing a shortfall of about €1 billion. In April, a state body said that “cumulative effects” of reduced funding, reduced staffing numbers and increased teaching burdens mean that many third-level institutions are at “crisis point”.

Ahead of the budget Fianna Fáil had made the reintroduction of postgraduate grants, abolished by the previous Fine Gael-Labour coalition in 2012. In August, the party described the removal of the grants as “appallingly regressive”.

The launch of the government’s Action Plan for Education in September – which saw the government state its ambition to create the best education system in Europe within ten years – saw no new money committed to the sector, despite containing a number of targets for the sector in improving access and developing research.

The action plan set one of the targets as “increasing financial supports for postgraduate students with a particular focus on those from low income households”. The timeline, according to the document, was “dependent on budget decisions”.

While large portions of the budget were publicly known ahead of the announcement this afternoon, there had been few indications or details revealed about increased funding to higher education.

Today Donohoe also announced a consultation, developed with the Minister for Education and Skills, Richard Bruton, on a new state-employer funding mechanism for higher education, which would begin in the middle of 2017.

The consultation would seem to coincide with the deadline of the second quarter of next year for the decision on and implementation of a new funding model for higher education, announced as part of the action plan for education.

The call for more funding support from employers through the tax system for higher education have been made by numerous parties and trade unions in the past. Writing for The University Times in February, leader of the Green Party, Eamon Ryan, called for an increase in corporation tax to help fund the sector.

In July the government’s higher education funding working group put forward three recommendations for the funding of higher education – the abolition of the student contribution and the creation of a predominantly state-funded system, the continuation of the current student contribution charge coupled with increased state investment, and the introduction of an income-contingent loan system. Speaking at the publication of the report, commonly referred to as the Cassells report, Bruton stated that additional funding must come alongside the introduction of these new performance targets.

Referencing the Cassells report, and the three options for funding put forward in the working group’s recommendations, Donohoe said the government was “committed” to the reform of higher education funding.

Emphasising that funding to higher education is “so necessary for the state, for students and for society”, Byrne reaffirmed his party’s commitment to a €100 million investment in the sector.

A €100 million in extra investment was called for by the Union of Students in Ireland (USI) in their pre-budget submission, alongside a €500 reduction in the student contribution charge.