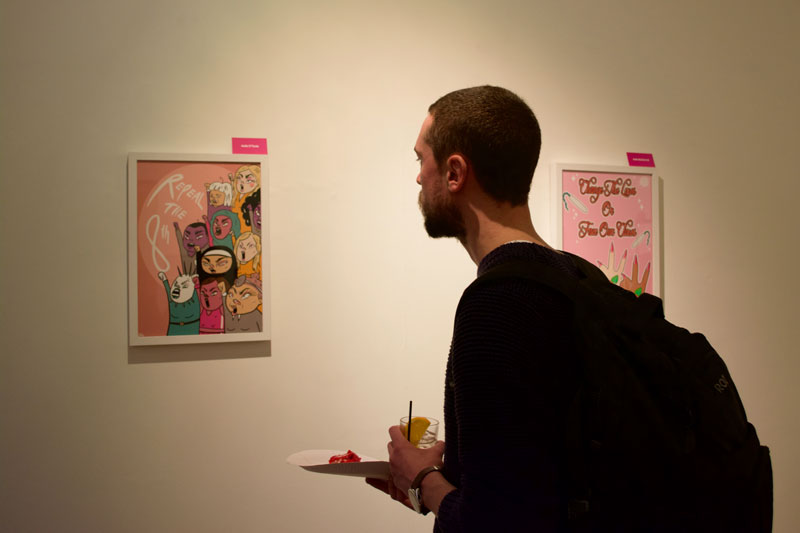 Yesterday evening, the highly anticipated “Someone You Love” exhibition took place in the Copper House Gallery off Synge Street. Although the event was free to attend, strong online demand required attendees to register beforehand, and places at ran out rapidly after their release, a reflection of the overwhelming support the pro-choice campaign has seen in recent months.

The exhibition, organised by former Trinity College Dublin Students’ Union (TCDSU)’s Communications Officer Aifric Ni Chríodáin, aimed to raise awareness for the pro-choice campaign and more importantly to raise funds for Abortion Support Network, a UK-based charity providing assistance for Irish women who are forced to travel to Britain in search of a termination.

The packed gallery was awash with “REPEAL” jumpers and badges bearing Masers’s iconic motif. Attendees were treated to refreshments from Teelings along with Maser-themed donuts supplied by Aungier Danger, thoroughly enjoyed by those who managed to snag one. The exhibition follows in the footsteps of the recent artistic revolution that has developed around the pro-choice campaign, which has given it a unique voice in the sphere of Irish social movements. The crowd appeared lively and optimistic, with a sense of unity and empowerment, which was encouraged by DJ Vicky Curtis, who wore a tshirt with the fitting slogan “repel the hate”.

Twenty Irish artists contributed works to the exhibition, all of which reflected the theme of the evening. Some well known names such as Fatti Burke, the brains behind Irelandopedia, and artist and activist Will St Leger were featured in the line-up. The work was varied, ranging from prints to photos and illustrations.

Artist and former Trinity student Naoise Dolan presented a comical take on the eighth amendment in two works. One piece was a comic strip entitled “Things To Do With the 8th”, suggesting one more appropriate use for the bill would be to use it as a doorstop. 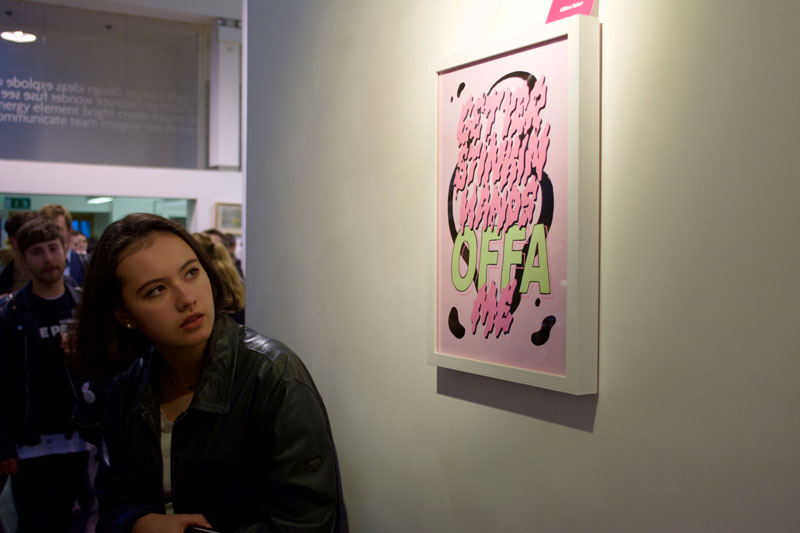 Other works displayed directly alluded to the suffering caused by the eighth amendment. A piece by Sarah Moloney depicted a woman carrying a female gender symbol, representing the “burden” that her gender has placed upon her. Dolce Merda X One Strong Arm’s piece presented the simple but poignant image of a single hanger on a black background.

Fushia Mac Aree’s image showed a modern take on John Lavery’s Portrait of Lady Lavery as Kathleen Ni Houlihan (1927) commissioned by the Irish free state, an inherently Irish image, which depicts the mythical figure leaning upon a harp, and is intended to evoke feelings of nationalistic pride. Mac Aree’s version follows the same composition as Lavery’s but depicted in a modern style and with entirely different connotations. The slogan “Repeal the eighth” is inscribed on the harp, changing the image from one of nationalism to one of Irish feminism.

A series of photographs by Emma Campbell offered an alternative viewpoint. The photos indirectly referenced the theme, in that they did not show any people, slogans or distinguishable places. The photos instead alluded to what may be interpreted as the journey to receive an abortion. The photos are taken from a bus or car and showed blurred images of the view from the motorway. They are subtle and eerie, evoking feelings of loneliness and reflecting the stigma against Irish women who travel for terminations.

The night also featured appearances from a number of speakers including Louise Burton, who spoke at the recent March for Choice, and Julie O’Donnell from Termination for Medical Reasons, the Irish support group who assist women seeking abortion for reasons of fatal foetal abnormality, gave a heartbreaking account of her own search for a termination. Colm O’Gorman, Executive Director of Amnesty International Ireland, also spoke. He referred to the laws of the eighth amendment as “draconian” and “barbaric”, denying women and girls of basic human rights. While he was aware that he was already speaking to a crowd who shared his same vision, he stressed that it was not the anger around this issue that was the problem but in fact the lack there of, and the concept of tone policing which is deeply misogynistic. Later, O’Gorman stated that “angry women are not the problem”, noting that “women can be angry and coherent”. This assessment was met with a loud applause from onlookers.

On the whole, the night was a great success, raising much needed funds for Abortion Support Network through sales of limited edition prints and donations. The huge turnout, like that for the march for choice, was reflective of the enthusiasm that many Irish people have for constitutional amendment and change.