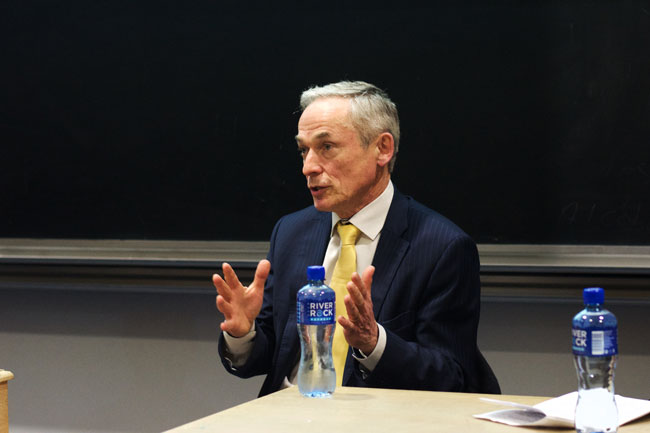 The Minister for Education, Richard Bruton, has said that he hopes there will be a “consensus” on a new funding model for higher education by the next budget in 2018.

Responding to questions from The University Times at discussion on higher education funding hosted by Trinity Young Fine Gael (YFG), Bruton said that he hoped a decision could be made before the next budget to allow for the costs of any new funding model to be assessed.

The Action Plan for Education, launched by the government in September, outlined the second quarter of 2017 as the timeline for when a new funding model for higher education should be implemented.

Commenting on when a decision could be made on a new funding model, Bruton said: “We haven’t set a date aside from the next budget.”

This decision will come when discussion at the Oireachtas Education and Skills Committee on a new funding model is complete. Bruton said he hoped, once discussions had concluded and a “consensus” had been reached, he could “go to government with a proposal that stands a good chance of success”.

Bruton reaffirmed he party’s commitment to a neutral stance on the issue. Referencing the minority position of the current government, Bruton said: “I have decided not to say this is what we’re advocating. We need to listen to the others.”

He also referenced the actions the government has taken on higher education funding, referencing the last budget, where the government announced a €36.5 million increase in funding for higher and further education, as well as the introduction of a full maintenance grant, worth nearly €6,000, from September 2017 for postgraduate students in the lowest income category.

“The budget”, he said, “demonstrated what we’re doing immediately”.

Fianna Fáil have not yet made a fully clear their stance on a new funding model for higher education. However, speaking to The University Times in September, Fianna Fáil’s education spokesperson, Thomas Byrne, said his party were “cautious” about the impact of an income-contingent loan scheme.

The Oireachtas Education and Skills Committee, chaired by Fianna Fáil’s Fiona O’Loughlin, are currently in the process of discussing the three options set out by the working group report – the abolition of the student contribution and the creation of a predominantly state-funded system, the continuation of the current student contribution charge coupled with increased state investment, and the introduction of an income-contingent loan system.

In an interview with The University Times in September, Bruton said a compromise on the three options put forward by the government’s higher education funding working group is possible.

The talk this evening was also attended by Trinity’s Director of Public Affairs and Communications, Tom Molloy, as well as a member of Trinity’s branch of the Irish Federation of University Teachers (IFUT), Hugh Gibbons. Discussing the dramatic declines in state funding the higher education sector has experienced in recent years, Molloy said: “Institutions can be wasteful. They tend not to be wasteful after their budget have fallen 40 per cent.”Gibbons echoed this, citing the damaging impact austerity had had on the higher education sector.

Calling for a “realistic” discussion on funding, Molloy said it was important that the sector doesn’t decline to a state where students find “they’ve wasted four years”.