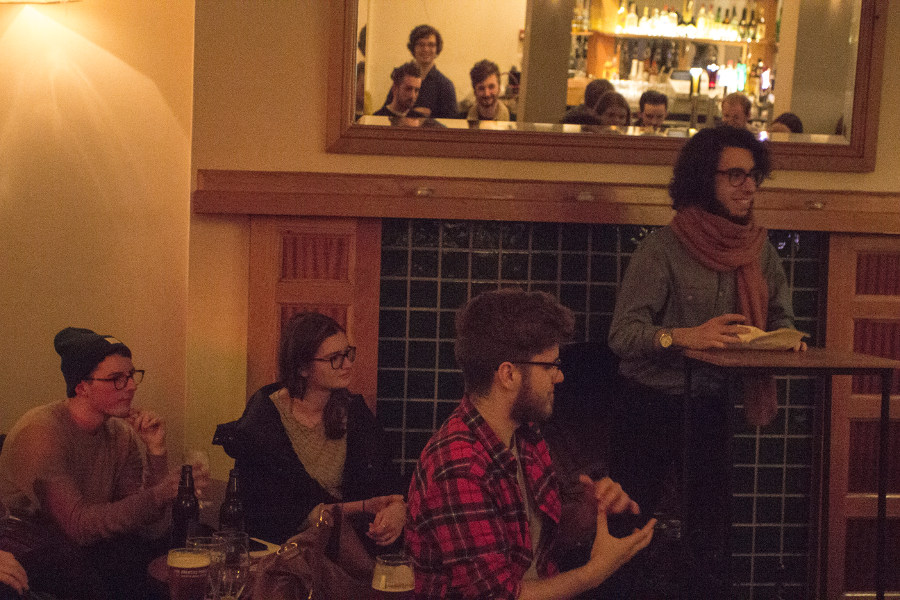 After last month’s gathering in Jack Nealon’s Pub, last night Cave Writings moved to the upstairs of Boar’s Pub on Capel St. Unsurprisingly, the change of location did not affect the meeting’s bohemian atmosphere. The room’s wooden walls and abstract paintings proved artistic enough to stimulate creativity. As guests began to arrive, they immediately felt compelled to share their writings in a friendly and supportive environment. Fourth-year English student Leo Dunsker hosted the event, in collaboration with Students for Justice in Palestine who are currently running a week of events to raise awareness about the Boycott, Divestment and Sanctions (BDS) movement. Notwithstanding Cave Writing’s involvement in the Palestine Action Week, the evening had no specific theme, so literary creativity could flourish in the freest possible ways, while awareness for Palestine was raised through guests’ dynamic participation.

After a first round of friendly chatting, addressing a group of over 15 people, Dunsker introduced the first four speakers. Ed Salley’s first poem dealt with self-discovery in chaotic modernity. “I wish we could stop time”, he said, expressing a quasi-universal concern in an extremely fast-paced world. He then defined his second poem as “an exercise in empathy” – it had been written in collaboration with a friend who, unfortunately, could not attend the gathering. Next, Ciar McCormick approached the podium. Having said it was the first time he shared one of his compositions aloud, he read his poem “Sunday Visit”. As a philosophy student in Trinity, McCormick argued that when he approaches poetry, he treats words differently than when he studies Kant or Nietzsche, because he believes that through poetry, they can express their own musicality. Following this performance, Will Fleming’s poem dealt with professional ambitions in the face of humanity’s inability to communicate, with visually strong language. The first set of readings ended with a dialogue piece from Sophie Fitzpatrick and Imaan Bari. Reading informally from their smartphones, the dialogues presented creatively reflected conversations held over Facebook, which explored how the pair appreciate one another, whilst discussing the crying aesthetic and future home-time.

After a 15-minute break, the next four speakers got their chance to take to the podium. Kevin O’Héanna, reading from his computer, shared a short extract from his latest play about college students who get trapped in the self-destructive world of drugs and alcohol. Next, Leo Dunsker approached the stage reading firstly a short story on a teacher who has a strong dislike for poetry, then two poems criticizing misogyny and capitalism respectively. With a witty tone, he mocked archaic social conventions, idealising a more cohesive and classless society. Then, Nathanael Roman’s poem successfully mixed imagination with everyday reality, through the mingling of his emotional wanders and the haunting thought of a dentist checkup. Finally, Kieran O’Rourke, reading from his smartphone, shared his tribute to the socialist poet Otto Renè Costillo, significantly called “Guatemala 1957”. He went on to criticise political barriers and walls, in favour of social inclusiveness and global peace.

After a final round of applause for all the speakers, the event drew to a close. Ciar Mc Cormick then spoke again, thanking everyone for having shared their writings and inviting guests to stay for mingling and conversation. In collaborating with the Students for Palestine Group, Cave Writings went beyond the norm, without sacrificing their iconic style. Some poems were only a few lines long, while others took up to five minutes to be recited aloud. At the end of the evening the writers received enthusiastic feedback in a casual environment. Undoubtedly, Dunsker’s guidance will leave the door open for further collaboration, conveying how poetry can refer to history while raising awareness of the evils of 21st-century society.