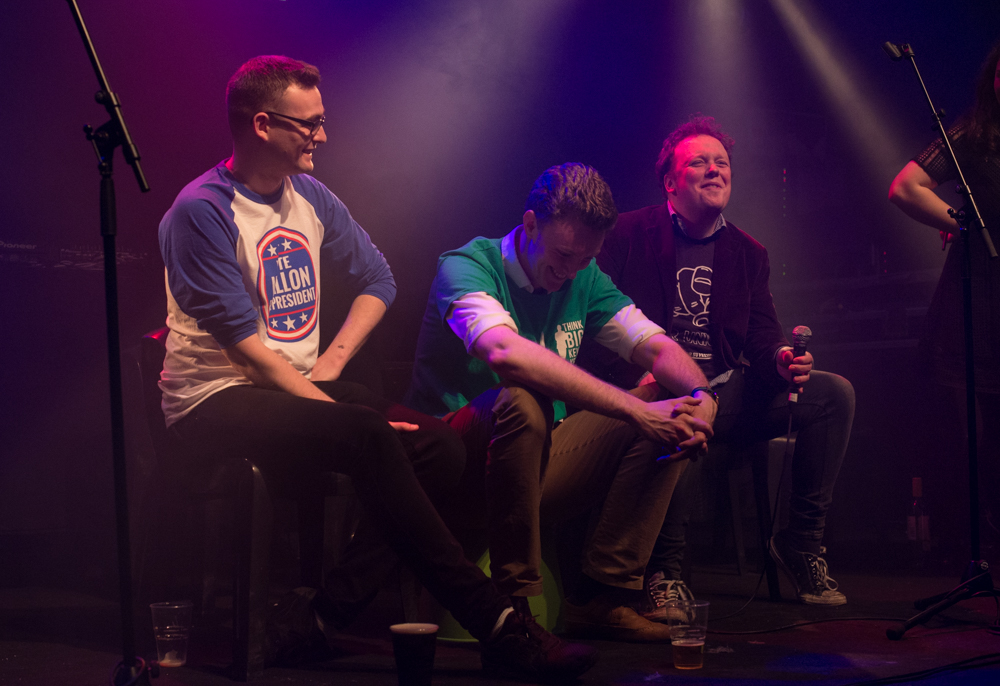 Last night saw the Piranha and Trinity Ents dabble in stand up satire, by taking over the Button Factory with their inaugural hustings as part of Trinity College Dublin Students’ Union (TCDSU). In what was a very different affair to the hustings at council the candidates were invited on stage, drinks in hand, to get involved in games and forced – though not entirely so – karaoke. While for the most part cringey and far removed from the biting satire of the annual Piranha election special, the event did serve one very important purpose in the altered election period: it gave the candidates a chance to hang out and have a laugh.

First up was the staple of all drunken parties, Never Have I Ever, played under a tailor-made election bingo drinking game and the looming face of Princess Diana, for seemingly no reason. Statements including “never have I ever been an active member of Fianna Fáil” and “Never have I ever been a proxy puppet for Grant Tierney” managed to both embarrass and single out candidates. But like any decent Ents event it all came back to sex, with candidates asked “never have I ever had sex in a public place”.

With the forced, but definitely successful bonding out of the way, candidates were summoned group by group to the stage for their own bout of mortification. Lone education candidate, Alice MacPherson stepped up beneath a Geordie Shore mash up of MacPherson’s campaign photos in the charmingly ramshackle style of the Piranha tasked with singing Bonnie Tyler’s “Total Eclipse of the Heart” – again, chosen for seemingly no reason. MacPherson took to the task with characteristic vigor, quipping “I feel like Mariah Carey on New Year’s Eve” before somehow inspiring the small but engaged crowd to join in.

Next, the welfare teams, split into team B and team two, took to the stage, tasked with fielding morally dubious and tediously complex questions such as who would you save from a runaway train, Beyoncé pregnant with twins or your dad. For the record, Laura Grady voted to “just let it happen” while Damien McClean was in favour of pushing a man to stop the train. Emma Purser assured the audience that her dad, a Church of Ireland rector, would get the victims into heaven, while Meabh Cullen, when asked how she would help students through the 20th anniversary of Princess Diana’s death – finally, it makes sense – said she would hold a contest during Trinity Ball. Rachel Skelly got a more specific question than the others, asked how she would celebrate the 10th anniversary of Britney Spears’s epic breakdown, aside from a haircut homage.

Truly, it was during Jonah Craig’s, the only entertainments candidate, time on stage that the spirit of Valentine’s Day was evoked as it really is. In what we assume was supposed to be a roasting of Craig emerged as a glorious piss-take by Sarah Storey, the first Lady of Ents, of her boyfriend, outgoing Entertainments Officer, Paraic Rowley. Though mostly tight-lipped, Craig managed to answer a question on who would fill Storey’s shoes as First Lady, noting that Ross Cooke, Craig’s campaign manager, is the one more deserving of a promotion. Storey shot back with a question on how Craig would spend Valentine’s Day with Cooke, perhaps forcing him to host a husting with his outgoing successor? Until this point, the Ents/Piranha Franken-event had had an awkward grace to it, but it was with the Ents chat that the audience got too long a glimpse at its hodge podge of parts.

Úna Harty, the only communications & marketing candidate struggled under the weight of her own renowned love for One Direction, stumbling with questions on the third song of their second album and what colour Niall Horan’s eyes are – “I’m going to go with blue”. Ents can’t help themselves when it comes to making sex jokes more awkward than a drunken shift in Coppers. Admittedly, the question “did you at one point send a tweet saying I have an erection for one direction” got laughs more so for the rhyme than for the bold word uttered, but again it served to remind people that we’re all students here, awkward and silly.

As a Buzzfeed quiz on “What per cent Kourtney, Kim and Khloe are you?” slowly slid into the projection, Dominic McGrath similarly took the stage as the only candidate in The University Times Editor race. As Hannah Beresford announced that he was “his own person and hasn’t been groomed for this position for the last three years”, McGrath was asked to set aside his manifesto in favour of hard-hitting personal questions. Though starting strong by asking how he would react to losing his favourite possession, his red and blue hat in this case, and how he would feel being broken up with by his long term partner, Edmund Heaphy, the questions quickly reverted back to bland Buzzfeed fodder. Nonetheless, Dominic finished with a score of 37 per cent Kim, 32 per cent Khloe, 31 per cent Kourtney, leaving the stage as the selfie queen he is.

Until this point the hosts had allowed candidates to embarrass themselves for the most part, but it was with the presidential candidates that Piranha hosts were back in form, casting Thomas Emmet, Bryan Mallon and Kevin Keane as a motley crew of ruddy faced dictators. Having already been targeted during the Never Have I Ever segment, the final section featured Keane on screen as Chairman Mao, Mallon as Stalin holding up baby with GAA ball as a face and Emmet as Mussolini. Despite this, the hustings ended as they began, with awkward forced interaction, as hosts encouraged the three presidential candidates close their eyes and “maybe hold hands”.

It’s worth wondering where the line between taking the piss and encouraging already tired stereotypes for the sake of generating content lies when it comes to the Ents and Piranha hustings, and certainly last night’s event tread that line somewhat haphazardly. Ending the night with all candidates on stage, arms linked, singing Take That’s “Rule the World”, you weren’t sure whether the focus on camaraderie was genuine or yet another piss take, and maybe the Piranha should stick to their day jobs as a satire publication. Still, there’s something to be said for an event that ends with Keane holding a dildo, Craig wearing a bald cap, McGrath holding an issue of Trinity News and Emmet with a Frozen puzzle.