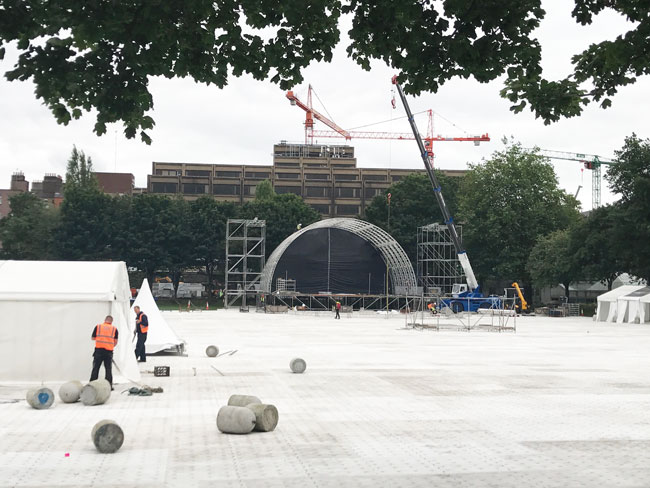 Preparations for a series of on-campus concerts by big names in Irish and international music have begun in Trinity, with construction of a stage underway on the cricket pitch.

The series, hosted by Trinity in conjunction with productions company MCD, will include six concerts and will take place from July 6th to 11th. The shows will all take place on Trinity’s cricket pitch, between the Ussher Library and the Pav.

As the amount of state funding to Irish colleges has declined and Trinity has relied more heavily on commercial enterprises, College has repeatedly assured students and staff that the profits from the concerts will be put towards Trinity’s “academic mission”. Speaking to The University Times in 2016, Provost Patrick Prendergast welcomed the idea of Trinity hosting gigs and concerts over the summer: “When we have the opportunity to make money from events, we do need to do it. Every university is doing it. American universities are very good at it as well. And this is generating revenue we can use for academic purposes.”

The concerts come after Trinity hosted an American Football Showcase last year, in what was a rare commercial event targeted at those external to the college community, both internal and external, to take place on campus. As part of the College Football Classic between Georgia Tech and Boston College in the Aviva Stadium, Trinity’s Front Square was taken over by stages and vendors.

On July 8th, veteran Irish group Bell X1 will perform, followed by the Pixies, an American alternative band that reunited in 2004, on July 9th.

The concerts are being organised in part by MCD Productions, an Irish events company that has a longstanding collaboration with Trinity Ents in the organisation of the annual Trinity Ball.

Access to Trinity’s campus will be limited on the days of the concerts, with no pedestrian access in several areas on campus including the east side of College at the back of the Ussher Library, the walkway between the Pav and the Berkeley Library, the entrance of the Berkeley Library, the Rose Garden and the laneway at The Printing House. Pedestrians who need access to the east end of College can do so by using the path along the side of New Square and Players Theatre.

Nassau Street and Front Gate entrances will work as normal during the concert series.

Lincoln Place Gate will be closed to vehicles from 6pm on the days of the concerts, with alternative access provided through Pearse St gate.

Students and staff can enter Trinity’s buildings and the sports centre by swiping their ID cards or displaying them to security.

Trinity’s campus has been the venue for many events in the last few years in addition to the annual Trinity Ball, which has taken place in the College for 58 years and is renowned for being one of the largest private parties in Europe. Two years ago, a series of concerts was held in the College Chapel during Mental Health Week.

Tickets for the concerts went on sale in February and were priced between €44 and €55.