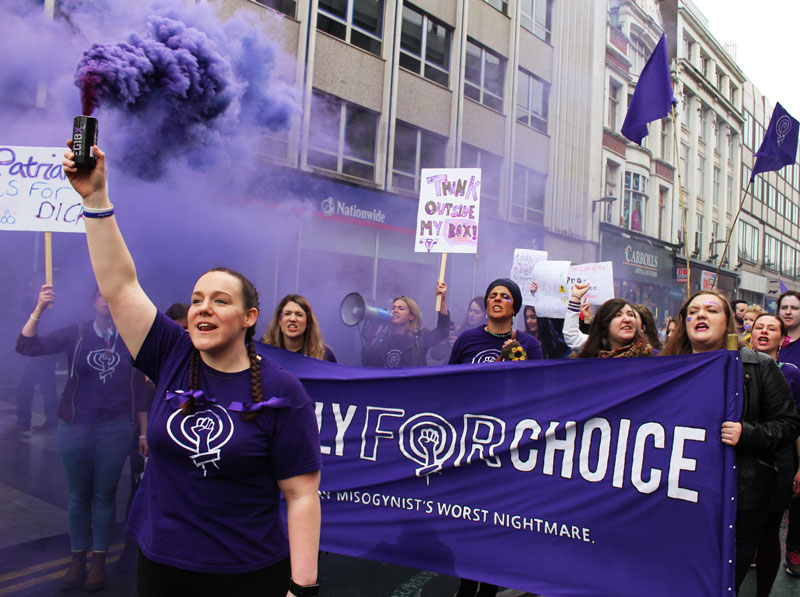 Students formed the core of a crowd of over 2,500 people, as pro-choice activists from across Ireland took to the streets of Belfast in the second such march on the island in recent weeks.

As the repeal campaign in the south gathers pace towards a referendum, students were to the forefront of the march today that, while significantly smaller than Dublin’s March for Choice in September, was one of the largest pro-choice demonstrations Northern Ireland has seen in recent years.

Speaking to The University Times, Olivia Potter-Hughes, President of NUS-USI, said that “it’s long past the time that we had those rights”. Noting the increased crowd size compared to previous years, she said that “this movement is growing” and politicians “will have no choice but to listen to us”.

Síona Cahill, Vice-President for Equality and Citizenship in USI, said that from USI’s perspective “it’s so incredibly important that we’re showing unity on this issue”. Cahill admitted that the argument in Northern Ireland is still at an “ideological” stage and is seemingly moving at a “glacial pace”.

Nominally, abortion reform in the North should be a lot simpler than in Ireland. With no constitutional restrictions on abortion, there is no need for a referendum or vote on the issue. Abortion reform is devolved to the Northern Irish Assembly, meaning that politicians have the power, if they choose, to introduce legislation to liberalise the North’s abortion law.

This has given the Northern Irish campaign a different focus. Chants that might have been familiar on the streets of Dublin were adapted and pitched not at the need for a referendum but instead at Northern Irish politicians.

Speaking to The University Times at the march, Gerry Carroll, a People Before Profit MLA for Belfast West, said that “quite simply there needs to be abortion reform in the North”. “We believe that women, whether they live in Shankill in Dublin or Shankill in Belfast, they deserve the right over their own bodies”, he explained.

Several members of Trinity People Before Profit made the journey from Dublin to the march. Speaking to The University Times by email, Aislinn Shanahan Daly, a member of the group who attended the march, said that they travelled to Belfast because People Before Profit is “a 32 county organization and we believe that the struggle for human rights doesn’t stop at the border”. She also explained that they were “returning that vital solidarity” that abortion rights activists from the North showed during the March for Choice in Dublin. 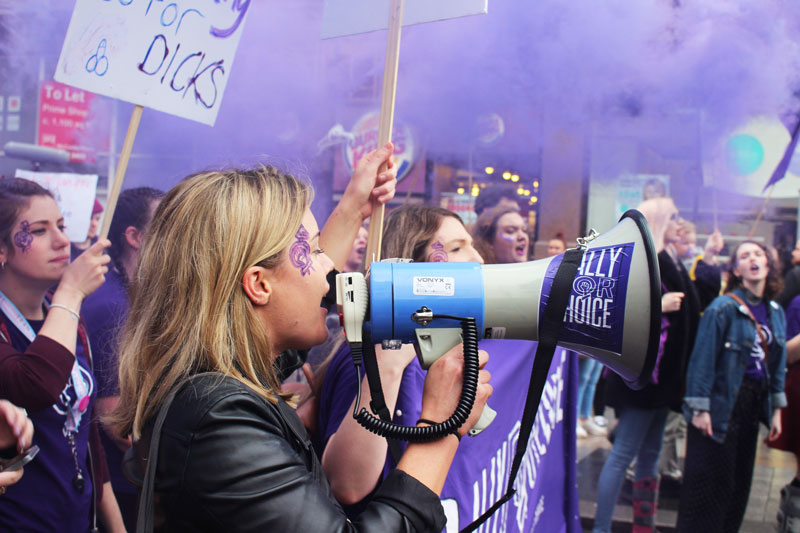 Also present at the march was Steven Agnew, leader of the Green Party. Speaking to The University Times, he said it was “time that my colleagues and the other politicians listened to us”. With the Republic of Ireland committing to a referendum, he insisted that “Northern Ireland needs to be a part of that process”.

Organisers and marchers spoke of the need for solidarity. On both sides of the border, abortion laws have faced national and international criticism. The repeal campaign has become a major issue worldwide in recent months and its success loomed large over today’s march.

Groups from Sligo, Galway and Kerry were also present. Speaking to The University Times, Denise O’Toole, a member of Sligo Abortion Rights Campaign, said that they travelled “to stand in solidarity with the activists and the women in their struggle”. O’Toole commented that the crowd appeared bigger than previous years and that “the days of things staying stagnant were over”.

Students in Northern Ireland have long shown their solidarity with the repeal campaign in the south. While the issue of abortion law is just as – if not more – contentious in the North, students have been at the forefront of the campaign to lobby politicians to change the legislation in the country.

Northern Ireland is unique in the UK for its restrictive abortion law, an issue that campaign groups have sought to highlight once again in recent months after the Democratic Unionist Party’s agreement with the Conservatives pushed Northern Ireland to the centre of UK politics.

Queen’s University Belfast Students’ Union (QUBSU) and Ulster University Students’ Union (UUSU) attended the march. It is only in recent years that the two unions have taken up pro-choice positions – only last year QUBSU’s council voted to adopt a position supporting free, safe and legal access to abortion.

Speaking to The University Times, Jessica Elder, Welfare Officer of QUBSU, said that as someone who had studied nursing, it was “baffling” to her that people in Northern Ireland didn’t have the same rights as those across the UK. “We’re demanding fundamental rights for pregnant people”, she explained.

QUBSU President Stephen McCrystall told The University Times that his union was marching today because they “trust all pregnant people to make the decisions that are right for them without fear or judgment or intimidation”.

QUBSU were involved in one of the most striking signs of solidarity over the summer, wearing repeal jumpers as Varadkar made a speech in the university. A question from one union officer to Taoiseach Leo Varadkar saw him acknowledge student concerns of a summer referendum.

Promised by Varadkar and expected to take place in May or June of next year, both pro-choice and pro-life campaigns are starting to organise their campaigns and anticipate the questions and concerns of a population that has watched the repeal of the eighth amendment become an increasingly pressing political issue for young people on both sides of the border in recent months.

Dominic McGrath and Kathleen McNamee were reporting from Belfast.