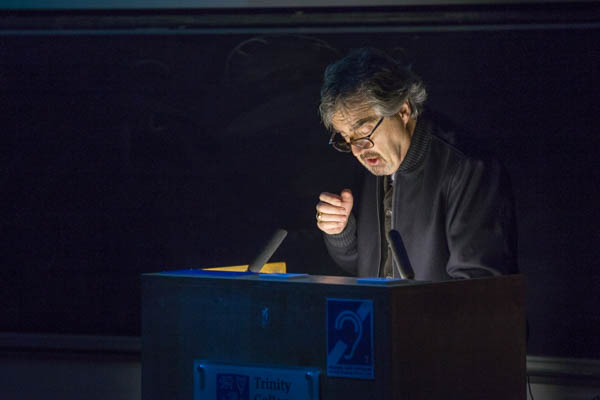 Sebastian Barry reading works by writer and Holocaust survivor Primo Levi, in Trinity, as part of this year’s International Holocaust Remembrance Day.
Photo by Ivan Rakhmanin for The University Times

Trinity graduate Sebastian Barry has been announced as the Laureate for Irish Fiction, taking over the position from Anne Enright.

Announced today by President Michael D Higgins, the role is an acknowledgement of Irish fiction writers and their contribution to the arts in the country. Barry, who has won the Costa Book of the Year twice and was longlisted for the Man Booker prize this year, will hold the position until 2021. Run by the Arts Council in partnership with University College Dublin (UCD) and New York University, laureates are asked to promote Irish literature on both a national and international level.

During his time studying ancient and modern literature in Trinity, Barry served as editor of Icarus. In 1995, he returned to the College as Writer Fellow and spent a year working and teaching in Trinity. Speaking to The University Times previously about the College, Barry called it a “golden university”.

“You should really go to the university that has the holy men and women of the subject you’re doing and some of them you will find in Trinity”, he said.

He has an immense body of work, spanning across varying disciplines including fiction and playwriting. Elected to Aosdána, an association of artists who have made an outstanding contribution to the arts in Ireland, in 1989, some of his most successful works include the play The Steward of Christendom which won several awards and starred Donal McCann. Early last year, his book The Secret Scripture, which was shortlisted for the Man Booker prize and won the Costa Book of the Year, was transformed into a film starring Rooney Mara and directed by Jim Sheridan. Days Without End, published in 2016, also won the Costa Award as well as the Walter Scott prize. It was also longlisted for the Man Booker prize.

Poet Paul Muldoon, who led the international selection panel, said that Barry “takes Irish fiction where it hasn’t been before”. “With transcendent insight as well as a storyteller’s ingenuity he teaches us to see the world differently, and to look more deeply into our own hearts”, he said.

Chair of the Arts Council Sheila Pratschke said the council was “immensely proud” to award Barry. “Sebastian is a writer of profound humanity and grace. Over the past four decades, he has produced a body of work that is testament to his passion for, and commitment to, literature and writing”, she said.

Speaking at the event today, Barry said it was “a joyous moment, after 40 years of work”. He continued by saying that Ireland is currently experiencing “a golden age of prose writing”, expressing his delight at the opportunity to be an ambassador for it.

“The mass of living Irish writers is distinguished only by the fact that there is such immense diversity of purpose and difference of styles. That is the great wealth of the present moment”, he explained. “What unites them is the ability to generate the shock that rare work gives the reader, not only in the pleasure and gratitude it engenders, but the serious business of the lines and engines of your own life finding answer and echo in another’s art.”

Irish author Anne Enright had held the role since 2015. The first ever fiction laureate, she previously won the Man Booker prize for her book The Gathering. Enright is also a Trinity graduate and studied English and philosophy. Other works include The Forgotten Waltz, which won the Andrew Carnegie Medal for Excellent in Fiction, and The Wig My Father Wore, which was shortlisted for the Irish Times/Aer Lingus Irish Literature prize.