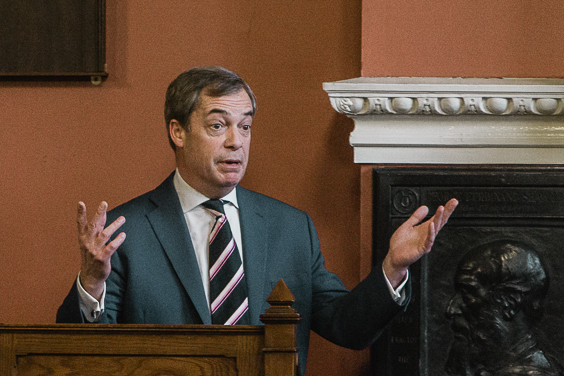 Nigel Farage, on his visit to Trinity, found time to sit down with College’s own right-wing student publication, the Burkean Journal.

After speaking to the College Historical Society (the Hist) on Friday, Farage met with the editors of the publication in O’Donoghue’s pub – Farage’s favourite pub in Dublin, he tells them – for an interview.

On the publication’s Facebook page, they promoted the interview with a video of Farage, apparently in the pub, saying: “If you haven’t seen the burkeanjournal.com, you’d better do. It’s my best interview ever.” The interview was the only one he agreed to after his visit to the Hist on Friday.

Speaking to the Burkean Journal about the crowd in the Graduates Memorial Building (GMB), Farage said that “they behaved incredibly well. Far better than I thought they would… More Goldman Sachs supporters than I would’ve expected, but I did enjoy teasing them with that”.

He credited this calmness to his opening, which addressed the issue of no platforming which was met with applause: “And maybe, just maybe, I got a slightly more respectful audience as a result of doing that. That’s my guess.”

Farage said of Trinity students that “the majority remarkably seemed to be pro-establishment”, which is “kind of what you expect of a university audience”. He referred back to the 1960s, when students were “anti-establishment”. “Now it seems the majority of students want to give control of their lives to a bunch of old men in Brussels. I can’t work it out, but there you are”, he said.

The editors of the Burkean Journal expressed concerns about the state of freedom of speech in Ireland in their conversation with Farage. “The left keeps getting more extreme, as you said, labelling you as sexist, homophobic, xenophobic, racist and all of the ‘-ists’ they can think of”, they said. However, Farage assured them that “this new growth of extreme Marxist-Leninist ideology presents an opportunity to conservatism, because it is the means by which conservatives can appeal to middle ground people”.

“The problem with focusing too much on labels is that you can spend your whole life apologising”, he continued.

Farage said that the reason that young people haven’t found conservatism appealing is because “Conservatives have looked like a bunch of weirdos with dandruff early”.

Describing himself, he said he didn’t see himself much as a politician: “I am an agent for change. I am like a magnet. I am like a big human magnet. I drag the argument to a position that it wasn’t in before.”

Farage spoke to the Hist on Friday, months after backlash from members led to the society rescinding its initial offer of the Gold Medal for Outstanding Contribution to Public Discourse.