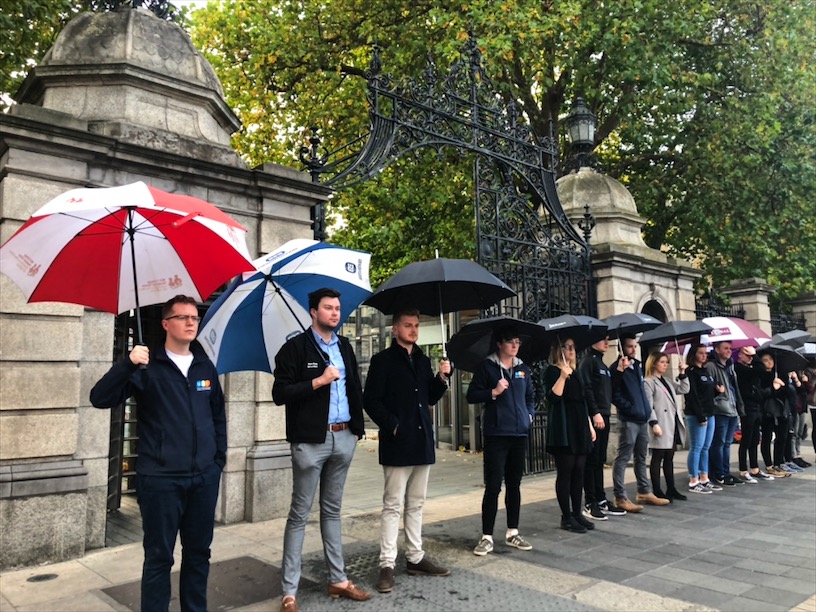 The Union of Students in Ireland (USI) gathered outside Leinster House this morning to protest against the proposed introduction of a rainy day fund during this year’s budget.

Around 20 members of USI and students’ union officers, including Trinity College Dublin Students’ Union (TCDSU) President Shane De Rís, assembled outside the Dáil at 8am, toting umbrellas and blocking the entrance.

The budget will be announced today at 1pm in the Dáil by Minister for Finance Paschal Donohoe.

Speaking to The University Times, USI President Síona Cahill said: “Effectively what we’re saying is that with all this talk of a rainy day fund, we’re saying the rainy day is now when it comes to third-level education.”

“The reality is”, she said, “that we’re hearing reports of €300 million to 2024 being introduced to third-level education. The government’s own report, Cassells, was calling for €600 million a year, and saying there’s a massive shortfall before 2021, so the idea that we would even prop up the system with €300 million additional in this budget is diabolical”.

“We need to present-proof the education, not just future-proof it.”

The rainy day fund, which was initially proposed last year, aims to counteract future economic shocks to the country. Announcing the measure in the Dáil last year, Donohoe said the rainy day fund was an important measure in “strengthening the national finances in a changing and risky world, especially in light of Brexit”.

The fund also has the support of Fianna Fáil, with the party’s finance spokesperson Michael McGrath saying last year that introducing a rainy day fund would form “a sensible part of budgetary policy and would be a sure sign we have matured and learned the lessons of the past”.

The fund will be given an initial investment of €1.5 billion from the Ireland Strategic Investment Fund, which will be topped up for the next three years by annual exchequer contributions of €500 million.

Speaking to The University Times, De Rís said the aim of the protest was “to highlight that the government is, instead of investing in higher education funding, putting money aside for a rainy day”.

“The rainy days for students in the higher education sector are already here”, he said.

On September 26th, in an unprecedented move, USI joined the Irish Universities Association (IUA), the Technological Higher Education Association (THEA), Irish Federation of University Teachers (IFUT) and the Teachers Union of Ireland (TUI) in urging the government to take action on the higher education crisis.

In a press statement, Cahill said: “There’s been a 2% increase in the number of students attending third level year on year, at the same time there has been a managed decline in state investment. What was a response to a recession is not at all acceptable as a way forward for a higher education system which we need to support student success, promote access, and produce top quality graduates.”

Cahill said that “the system is underfunded and students face the burden – at €3,000 per annum, students are already paying the second highest fees in Europe. It’s clear the government must act, and invest meaningfully in the present and the future of this country before it’s too late”.

Jim Miley, the Director General of the IUA, said: “The government has repeatedly stated that it wants to have ‘the best education system in Europe’. That cannot be delivered without a significant increase in investment in higher education. If the investment is not made, the future talent pipeline for the workforce will be jeopardised and the country’s competitive edge will be at serious risk.”

The IUA’s stance on higher education funding has changed in recent times. In September, in an interview with The University Times, Miley said the IUA would no longer lobby the government to introduce a student loan scheme, saying universities are increasingly becoming “agnostic on loans”.

Miley said that “loans were never going to solve the problem”. Instead, he said, the argument for loans “was something that allowed the government to get off the hook for the last couple of years”.