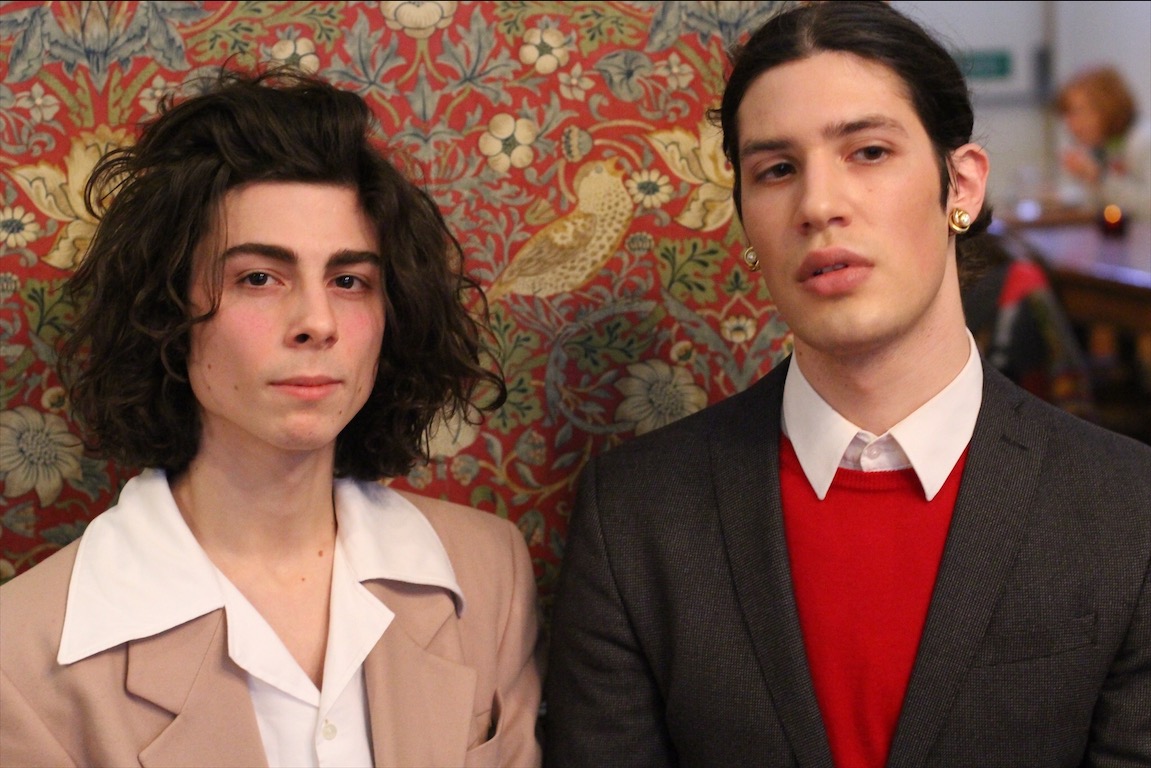 Patrick O'Donoghue for The University Times

Lucamatteo Rossi and Giorgiomaria Cornelio – a flamboyant, sartorially elegant duo based in Trinity – are two figures that one does not forget in a hurry. It is not hard to deduce from their distinctive style and evidently counter-cultural tastes that, for these artists, personal choices always amount to political statements. Navegasión is the co-tailored creative outfit that allows the pair to channel their artistic impulses as part of a larger project. The aim is to synthesise a melange of modes of expression, from poetry to cinema, and much more.

Having recently completed their latest film, entitled Like the Grave of a Stone, Like the Cradle of a Star and representing a psychogeographical exploration of both Ireland and Italy through folk tales and myth, I was eager to sit down with the enigmatic duo to discuss their experiences of culture in either country, how their new work should be interpreted, and the state of contemporary art and academia.

Speaking to The University Times, both Rossi and Cornelio emphasised that from their time living in both Ireland and Italy, they have concluded that although both societies are radically different in some ways, they are extremely similar in others. Additionally, remarking on his adamantine sense of self that always struggled against the predominant, oppressive mores of Italian society, Cornelio says: “I have always felt like a stranger in my own culture. However, this conflict between myself and certain aspects of my society is precisely what has made me want to create, and be controversial. I like to create a sense of confusion for myself.”

Rossi echoes the sentiment of gratified disdain for prevailing cultural orthodoxies, in Italy as well as Ireland. Rossi lays the blame for this deadening atmosphere at the feet of political correctness. This, for both Rossi and Cornelio, has become a social force that attempts to insulate people’s sensitivities for fear of causing offence, and represents a state of affairs in which people are no longer being challenged and forced to acknowledge their own flaws.

Cornelio says: “What I am experiencing now, especially here in Trinity, is being told that everything is fine all the time. We don’t need that as students. We need to be challenged, and corrected when we make mistakes, because this is how we can learn to grow and better ourselves.” Cornelio and Rossi’s attitude towards this cultural trend of establishing “safe spaces” in academic institutions is that it has the toxic effect of resulting in the creation of safe art too. This, to their minds, is something that must be rebelled against.

Like the Grave of a Stone, Like the Cradle of a Star is described by Cornelio and Rossi as an atlas. Rossi elaborates: “What is found in the film is a very traditional way of storytelling. It maps the travels of a main figure and this main figure tells the stories of the people. We were very inspired by Apuleius’s The Golden Ass.” Apuleius’s work is the only Latin novel to have survived in its entirety from antiquity, Rossi explains. “It tells the story of this man who is transformed into an ass and travels the countryside around the time of the Roman empire and there are all these stories relating to the main figure. Our film does this same thing through telling ancient stories.”

Given the ambition and craftsmanship of Rossi and Cornelio’s latest work, it is clear that we can expect to see many more soulful and sophisticated artistic offerings from them in the future.