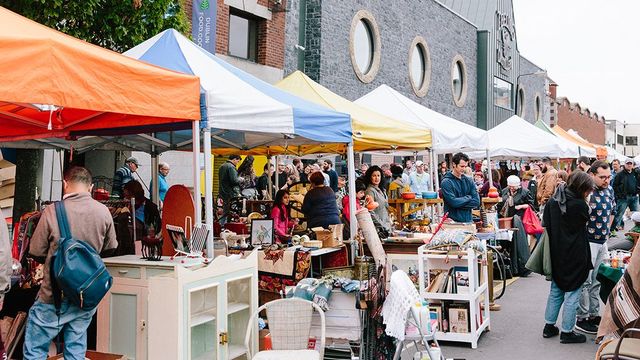 The Dublin Flea Market returned in May, after being forced out of its former location by developments.

When I heard about the return of the Dublin Flea Market, I was delighted. After being forced out of Newmarket by developers in June 2018, the flea had been out of action for almost a year. Fortunately, it returned with a bang and a new location in May this year. Now based in the Digital Hub in the Liberties, the Dublin Flea Market has resumed its traditional timetable, trading on the last Sunday of every month.

With music blasting from one of many falafel vans, stack upon stack of retro bric-a-brac, and the delicious smell of fresh coffee in the air, the flea is an absolute feast for the senses. For the first 10 minutes, in the sunshine, I really did feel like I was on holiday, exploring a market in Paris or Berlin. While the flea was primarily composed of second-hand stalls, some of Dublin’s best small businesses were trading at the market. Often, small businesses don’t have permanent locations and I find myself stalking their products online. I was extremely keen to see, in person, what they had to offer. Hey, Bulldog Design was a real highlight, drawing the eye immediately with colourful planters, eggcups, and clocks. Kopper Kreation also offered a beautiful range of homeware, specialising in copper light fixtures.

However, I was disappointed with the second-hand stalls that dominated the event. A significant portion of the second-hand clothing at the event was branded Primark or New Look. It was exactly like going into any charity shop and picking through the pieces, hoping for something great to pop out. The difference is, of course, that we know charity shops will be almost entirely full of mediocre clothes from standard highstreet shops. We also know that if we buy that Penneys t-shirt from Oxfam, the money will go to a good cause. At the flea, I couldn’t help but feel like the pieces hadn’t been curated in the way one would expect.

Moreover, all the food at the event was way out of my price range. I began to queue for falafel but was alarmed by the price board. The €9 falafel wrap was enough to put me off buying lunch at the flea, but the real nail in the coffin was the €4 kombucha. I just couldn’t give my money to anyone selling a fermented fizzy drink for almost a fiver.

If you want to walk around, people watch, and check out some great local businesses, Dublin Flea Market is the place to be. If, however, you actually want to buy lunch or a new outfit, I’d say you’re better off straying from the flea and exploring the surrounding area. With charity shops lining the streets, the Liberties is an excellent place to sustainably source some new clothes, and you’d definitely get better value for money in the area’s second-hand shops than you would at the extremely trendy flea.

The €9 falafel wrap was enough to put me off buying lunch at the flea, but the real nail in the coffin was the €4 kombucha

I just couldn’t help but feel an uncomfortable contrast between the surrounding area and the market itself. In an area with such a historic and cultural connection to market trading, with particular emphasis on low prices, the hip, high-priced flea seems incongruous. Honestly, between vegan food trucks and boutique vintage furniture, I felt as though the Happy Pear might jump out at any moment and sell me a lettuce for €20.

Undeniably, the flea provides a great platform for local businesses and it’s great that it has found a new location after so many months out of action. Ultimately, though, the flea’s beautiful but high-priced independent business stalls and underwhelming second-hand stalls seem more the preserve of the urban middle classes than a natural fit for the Liberties – and will certainly be out of the price range of most of Dublin’s students.