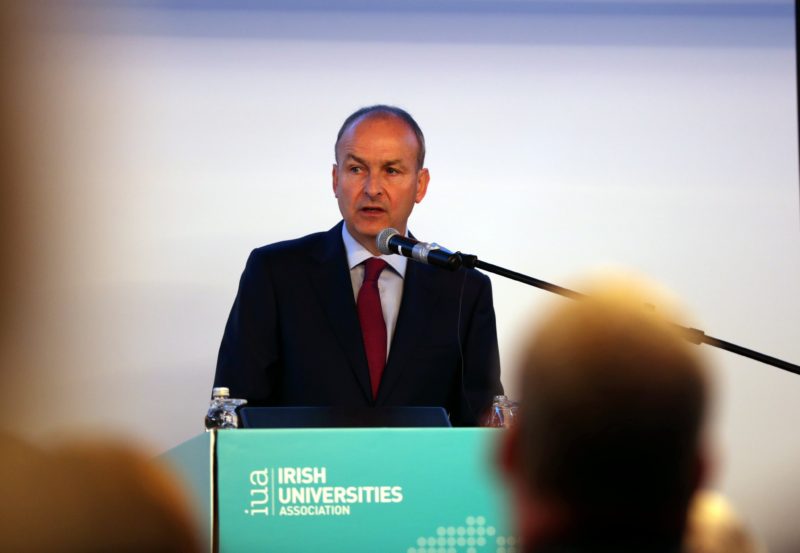 Fianna Fáil leader Micheal Martin made headlines yesterday morning when, at a prominent higher education funding conference, he confessed that, if in government, Fianna Fáil would not abolish student fees, and would consider the introduction of student loans.

This bombshell, contained within an otherwise lengthy and relatively uncontroversial speech, is likely to provoke cries of derision from across the political spectrum. The maintenance of student fees, many will say, is just another prong of the relentless neoliberal project being pursued by the endless succession of centre-right Irish governments – yet another attempt to shift the burden of social costs from the state to the individual.

This, as far as it goes, is a strikingly valid criticism of Fianna Fáil’s overall direction and outlook as a party. Without question, the Irish political class has shown contempt for the working classes on countless occasions, with a culture of negligence verging on the malicious. Irish social policy consistently operates on the basis of an “I’m alright, Jack” attitude, with the devastating effects of policy failings revealing themselves, unflinchingly, in cold hard evidence.

For all these faults, there is a kernel of reason in Martin’s remarks yesterday morning

This is an elite class, we must remember, which has presided over a homelessness crisis of unprecedented severity, devastating austerity policies which continue to linger, and an almost absolute breakdown of the social contract as we know it, and responds only with lip service, timidity, and totemic faith in a corrupt market.

But for all these faults, there is a kernel of reason in Martin’s remarks yesterday morning. While it’s unlikely that it was the one that motivated his policy vision, there is a strong argument against the introduction of free fees for all.

The argument is as simple as it is forceful: it is patently unfair to force tax-paying, low-wage workers to fund the education of middle and upper-class children who could afford to pay for themselves – or whose parents could afford to pay for them. The result of free fees for all is not, as some activists would claim, a society-wide increase in educational equality. Instead, it is an increase in the discretionary expenditure of affluent families, who no longer have to hand over fees for a privilege they would have paid for anyway.

This argument is not purely theoretical. A 2010 report from University College Dublin’s (UCD) school of economics found that government insurance of Irish undergraduate fees expressly failed to significantly increase educational equality. On top of this, the measure led to huge supplies of government funds being poured into writing off the student debt of privileged individuals for whom debt would be no real burden. This is a clear waste of finite tax money – money that could be better spent actually helping those in need, both inside and out of the higher education system.

From the ruins of this levelling critique, student loans emerge as a rational solution. The most likely form of student loan that could be introduced in Ireland – the kind outlined in the Cassells report on higher education funding – would be income contingent. The government would take an equity stake in students, with repayment based on future earnings. That way, students whose college education yields economic benefits – those who go on to become lawyers, surgeons and bankers – pay back the cost of their education over the course of their employment. Those who don’t end up in this higher income bracket have the debt cleared, and effectively receive free higher education at source.

The real criticism that can be held up against the student loan system is that the mere concept of taking out a loan will discourage people from taking up higher education. While the benefits are clear in practice, this might not be clearly advertised, and with people being naturally debt-averse, the introduction of student loans could have an optical impact that no policy tuning could overcome. But the fact remains that there are various factors that make university education feel unavailable to many. Solving these optical issues is a task that governments should not baulk at, but their very existence shouldn’t prevent beneficial policy change.

In an ideal world, everything would be free for everyone, and the pervasive impacts of privilege and inequality would be wiped clean. But while we exist under a system that sees some accrue fortunes at the expense of those with practically nothing, government intervention must be tactical. The tax system plasters over the cracks of capitalism, but it can only do this to a point. And it is the government’s duty to make sure that up to this point, the state apparatus is working to improve the situation, not making things worse.

We can criticise Fianna Fáil all we like, but we must not let abstract, unstable principles prevent genuine improvement for the most vulnerable. And if helping those in need isn’t the aim of education policy, what’s the point?