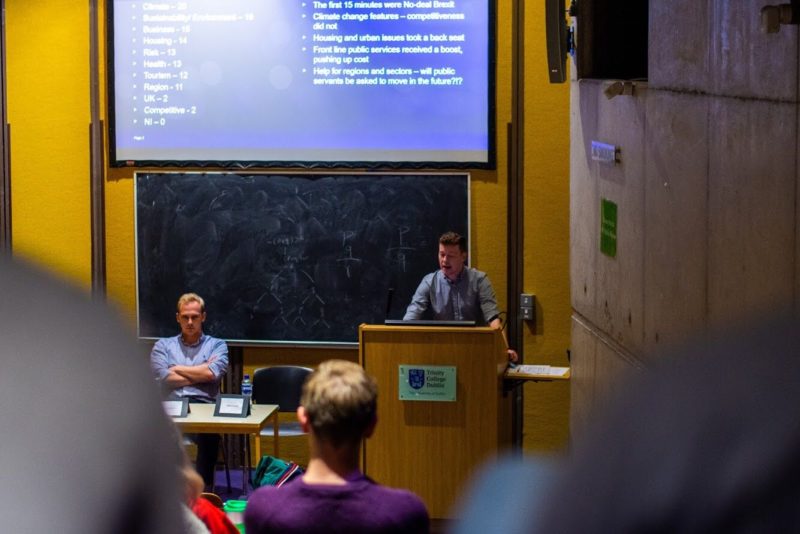 Yesterday evening, Dublin University Business and Entrepreneurial Society (DUBES), returned to the Uí Chadháin theatre for the third and final instalment of its EY Speaker Series.

These events, previously focused on the respective futures of the accounting and tax sectors, brought a group of experienced EY industry specialists to share their insights and expertise with their potential future colleagues. The grand finale, hosted shortly after budget day, appropriately concerned an analysis of the premier event in the financial calendar. It is hard to understate the relevance of the budget to all things business: as Dominic McNeill, the lead EY speaker working in transfer pricing, humorously suggested, “it’s like Christmas for tax advisors”.

The genuinely erudite content of last night’s talk was immediately apparent as we were told the presentation was based on that given to EY clients the previous evening in the immediate aftermath of the budget, and thus the professional reports of EY’s economic analysts. Understandably the first concern was Brexit – Pascal O’Donoghue’s address devoted its opening 15 minutes to potential no-deal.

Interestingly, EY was a little less pessimistic about impacts on Gross Domestic Product (GDP), suggesting the government had “interesting ways” of calculating national growth that skewed its predictions. More ominously, discussion of a worst-case scenario revealed that at least €650 million of the proposed Brexit fund would have to be raised through further state borrowing.

The presentation was understandably a little figure-heavy, yet the accompanying graphs and concise explanations offered by all EY speakers made everything accessible, even for attendees like me, who were less experienced in business and financial affairs. A progressive analysis of different tax and industry sectors combined to give an overall picture of relative stagnation or stability if one were to be more optimistic.

Minimal development of tax credits, a re-evaluation of climate related taxation and minor changes to the capital acquisitions tax were all overshadowed by the announced shake up of transfer-pricing legislation. From EY’s perspective, this promises a lot more work and certainly contributes to the recent company announcement of 600 new positions.

The attendees, enough to comfortably occupy the theatre if not exactly crowd it, were engaged with the presentation.

From the outset the speakers made it clear they were open to audience interaction, an opportunity well availed of with EY’s experts fielding queries ranging across the practical impact of “green taxes”, to the scope for further health-related charges on tobacco and alcohol. The free-flowing question time was clearly welcomed by both speakers and students and helped to round out the real-life effects of budget decisions.

The conclusion of the formal presentation did not mark an abrupt end to the evening. Both within the lecture theatre and later at a relaxed social reception, students had the chance for informal and educational discussion with the EY representatives about their experience and employment progression. Attendees were offered copies of the detailed budget analysis slideshow that was the basis of the presentation – a major boon to those currently engaged in business and finance courses.

In conversation with the speakers, I posed the question of why they considered such close engagement with students and college societies so important. McNeill viewed the event in reciprocal terms: for EY public relations, any opportunity to effectively advertise and demonstrate their work is a bonus, and these talks also present a chance to understand current student interests and map engagement with the finance and business world.

Paulus Heemskerk, a Trinity graduate, emphasised the value of bringing real detail to the prospective careers of current students, effectively clearing the haze and mysterious exclusivity that surrounds a major name like EY, not to mention the fun of returning to college as speaker not student.

Current DUBES auditor Saskia Higgins viewed this event and the EY Speaker Series in general as demonstrating the society’s forward momentum and continually growing relevance as an extracurricular vehicle for promoting the interests and prospects of business-oriented students. Good turnouts and audience engagement as seen last night can only inspire the committee to maintain their drive and direction.