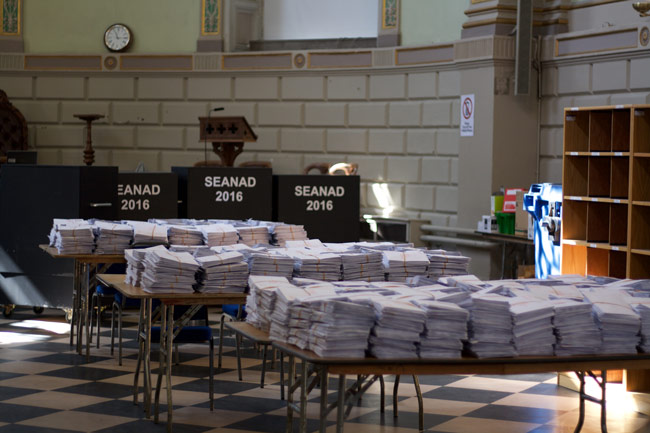 Ten candidates are set to run for the Seanad in the University of Dublin constituency, Trinity today announced, including incumbents Lynn Ruane, Ivana Bacik and David Norris and Joseph O’Gorman, the strategic development officer of the College’s Central Societies Committee.

Hugo MacNeill, the former rugby international and boss of Goldman Sachs Ireland, will also run in a race that contains six fewer candidates than the last election in 2016.

Nominations closed today at 12pm, with Trinity announcing the list of candidates in a press statement this afternoon.

Current Senators Lynn Ruane, Ivana Bacik and David Norris are all standing again in this election. Norris is the longest-serving senator on the panel, whilst Bacik is Reid Professor of Criminal Law in the Law School, and is also a former president of Trinity College Dublin Students’ Union (TCDSU). Ruane, who was elected to the Seanad in 2016 while serving as TCDSU president, will run again for a seat.

Bacik and Ruane are the only two women running for election.

Abbas Ali O’Shea, the director of educational organisation AFA Consultancy, will also contest the seats, as will Tom Clonan, a retired Irish army captain and academic who revealed a catalogue of discrimination against female soldiers in Ireland’s defence forces. Clonan ran unsuccessfully in 2016.

MacNeill, who won 37 caps for Ireland, currently works with the Trinity Centre for People with Intellectual Disabilities. Last year, the Irish Times reported that MacNeill was a member of Trinity’s controversial all-male society the Knights of the Campanile.

William Priestley, a director of Our Lady of Lourdes Community Services Group, will run again after losing out in 2016. John Derek Byrne, a lecturer in addiction studies in Maynooth University, has also announced his candidacy, with engineer Keith Scanlon completing the lineup.

Polls close at 11am on March 31st. The count will then take place in the Public Theatre, known as the Exam Hall, in Front Square.

Only graduates of Trinity can vote in the University of Dublin constituency. Earlier this month, The University Times reported that students who graduated in 2019 will not be able to vote, as the register of electors for the Seanad will only be updated on June 1st, 2019.

Ballot papers are to be issued via post to those registered in the constituency on February 28th.