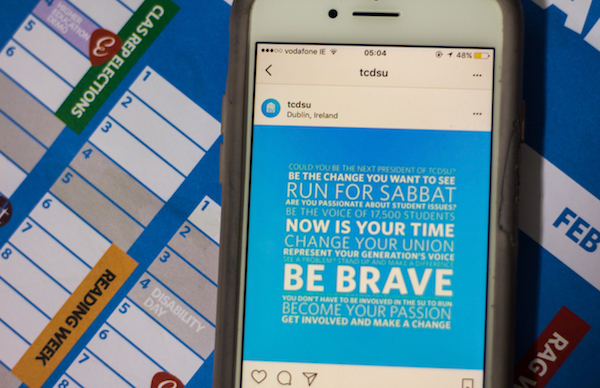 There was a certain irony to last year’s race for Trinity College Dublin Students’ Union (TCDSU) communications and marketing officer. A single-candidate race, it arguably became the most interesting of the election period when a re-open nominations campaign was launched against Muireann Kane.

Kane, who drew ire for her lack of a Facebook campaign page, eventually scraped home with 51 per cent of the vote. But if her race teaches us anything, it’s that there’s a widespread lack of consensus on the actual job of the communications and marketing officer. Is their primary function to make money, or should they direct their focus to helping solve the engagement problem? And how much time and emphasis should be given to each?

These are questions that this year’s candidates – final-year film studies student Hiram Harrington and fourth-year music student Philly Holmes – will have to answer in the coming weeks as they face off for the position. In interviews with The University Times, both attempt to tie the two issues together. Digital media, it seems, is the union’s best marketing tool for advertising and student engagement.

Both candidates have long CVs when it comes to involvement in Trinity’s student life. Harrington is the current editor of the Trinity Film Review, a member of DU Players and a member of Kane’s communication team, while Holmes is the current station manager for Trinity FM, as well as technical officer on the Ents Committee and the PRO of DUDJ.

Holmes is clear that bringing in revenue is the “core part” of the position – a similar argument to the one frequently advanced by Kane during her campaign last year. He points to his background as a sales intern with software company SAP as evidence of his marketing ability: “I was working as part of the sales team, developing marketing campaigns and working to try and drive sales and revenue to the team.”

But Holmes says the communications officer also has a role to play in solving the union’s engagement problem: he points out that the union’s social media has “been neglected a tiny bit” during Kane’s tenure. For Holmes, TCDSU’s online presence can sometimes resemble “just a wall of the TCDSU blue. There’s so much attention that could be given to PTOs and every officer involved in the SU. And the class reps”.

Harrington – a member of the union’s communications team for the last two years – also has a background in marketing: they’re the marketing and social media officer for Dublin-based business Base Camp. Their strategy for increasing funding involves engaging with local Irish businesses – like the Happy Pear. “Potentially, as they grow, we grow with them”, Harrington says, referencing what they call a “history of success” in University College Dublin and University College Cork. It’s not clear whether this idea is borne of idealism or pragmatism, but Harrington says ethical sponsorships are crucial when it comes to deciding how the union makes its money: “We should be partners with people who are proud to be partners with us and we should be proud to be partners with them.”

Perhaps with this in mind, Harrington is effusive in their praise of the union’s €12,000 deal with mobile company Three, brokered in 2018 by then-communications and marketing officer Paraic McLean. “Paraic getting that massive deal with Three was fantastic for the union”, they say. Holmes is less convinced, though not outwardly critical: “What benefit does the sponsorship with Three have on the students?”, he asks. “I’m just saying that you have marketing and communications, so you need to communicate the marketing.”

But if the candidates diverge on the nuts and bolts of marketing strategy, they’re remarkably aligned when it comes to a fundamental aspect of the union’s communications: the weekly email and its accompanying deal of the week. Harrington wants to step up its accessibility, and moots the possibility of introducing a “spoken aloud version of the weekly email that’s accessible to students that are maybe having difficulties reading things for long periods of time”. On the deal, Holmes calls it vital for instilling “the feeling of being a student” while Harrington praises its practical value: “When it’s […] food-focused or supply-focused, they’re absolutely fantastic and I’ve used them many a time myself.”

On communication, Harrington ties in a lack of union engagement with the implementation of the Trinity Education Project – a topic that usually gets hackles raised among students. Harrington wants to increase the union’s transparency around council decisions.

Harrington and Holmes are fortunate, in a sense – previous candidates would have faced pressing questions on how to address the union’s years-long deficit. But a welcome return to a surplus arguably gives Harrington and Holmes opportunities for increased spending, while also drawing attention to the importance of sustaining TCDSU’s current rude financial health. Holmes sees the current period of stability as a chance to set better supports in place. One of his proposals to secure “more efficient revenue generators” is to install more monitors across the campus on which the union could display potential sponsors.

Both also argue against a proposal mooted at council last year that would have seen the position merged with the role of ents officer. The role of communications and marketing officer, they agree, comes with enough work by itself.

Holmes, then, seems the slightly more far-out candidate, more willing to question previous decisions. Harrington, whose experience working directly with successive communications officers lends them valuable experience, appears likely to run on reworking, rather than revolutionising, the office of communications and marketing. It remains to be seen which pitch students will warm to.

Faye Curran is Deputy Opinion Editor of The University Times, and will edit the communications race during the upcoming TCDSU elections. Deputy Music Editor Joe Coughlan and Staff Writer John Keenan will act as communications correspondents.