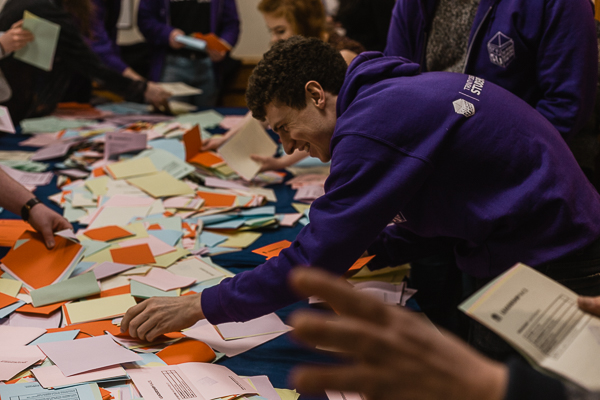 The leadership race for Trinity College Dublin Students’ Union (TCDSU) can be rather amusing. I’ve often imagined a bingo card filled with campaign buzzwords that you can be absolutely certain will be repeated over and over again throughout the campaigns. Microwaves? Check. Weekly email? Check. Student engagement? Check, check, check.

The low number of students who actively participate in TCDSU activities is a problem that rears its head every year during election campaigns, and nowhere is it more evident than at the ballot box itself. Last year, the presidential race had a valid poll of 3,355 – which, in a college with around 18,000 students, is undeniably poor.

In the recent Irish general election, turnout was as high as 62 per cent in some areas. In the UK, 67.3 per cent of eligible voters showed up on polling day for the general election last December. On a national level, governments around the world have tried a number of methods designed to increase voter turnout – with varying degrees of success. Could some of them be applied to the student context?

There are a number of arguments in favour of online voting, for instance: it reduces paper waste, it makes it easier for students on placement to vote and it provides greater accessibility for students with disabilities. However, there’s a reason that students’ unions and, indeed, many governments, continue to use the old-fashioned pen and paper: technology is temperamental.

Given that TCDSU has already trialled an online voting system, it’s likely we’ll see it again in the future – but the room for error with an electronic vote remains a major caveat. Last September, TCDSU erroneously elected a number of class representatives after a pilot online voting system gave rise to some technical difficulties.

There’s a reason that students’ unions and, indeed, many governments, continue to use the old-fashioned pen and paper: technology is temperamental

While the consequences of this mishap were relatively minor – some disappointed aspiring class representatives and an embarrassed union – electronic voting has the potential to cause even greater problems.

If we can’t even trust such a system to elect the correct people, can we expect that it will safeguard against the potential for people to vote more than once, for example? Or that it will protect voter anonymity? Of course, the very purpose of these pilots is to allow such problems to present themselves in order to fine-tune the system before rolling it out on a larger scale, but TCDSU’s blunder in September is a reminder that sometimes technology can’t be relied upon.

In saying all of this, if students’ unions can ensure the integrity of an online voting system, it could be a very effective way of increasing voter turnout. As was pointed out at TCDSU council, the trial of this online voting system saw 584 votes cast from just four schools. Considering the mere 3,355 students who voted in last year’s TCDSU election, this is quite impressive.

Online voting brings the polling station to the voter. If such a system is rolled out across all 25 schools, it could drastically increase the number of people who cast a vote in students’ union elections. It’s not hard to imagine why: convenience.

Is voting uncool? Many teachers have desperately tried to make politics and civic engagement fun, but their enthused speeches often fall on deaf ears. The question is how you create a buzz around writing a couple of numbers on a page and dropping the page in a box? If you don’t take an interest in elections, people who get excited about voting seem extraordinarily lame.

One country that considers it “cool” to vote – albeit an attitude fostered by a contentious voting system – is Australia. Compulsory voting has been in place in the country since 1924 – and, according to Australians interviewed by the New York Times in 2018, voting Down Under is “like a party”. Voting is often accompanied by hot dogs – so-called “democracy sausages” – that are sold outside polling stations to raise money for the building in which the polling station is set up.

It’s probably a stretch to say that the introduction of mandatory voting in TCDSU elections would make voting cool – or that the accompanying hot dogs would lure students to the polls – but it seems that Australians have created a sense of camaraderie and unity around the act of voting – an act that is a requirement rather than an entitlement.

However, it’s not all fun and games (and hot dogs): not voting in an Australian election, be it state or federal, carries a fine of up to 79 Australian dollars. In the student context, where voters are, in many cases, on small budgets, financial penalties probably aren’t the answer, and almost certainly wouldn’t do much to improve a students’ union’s image.

How, then, could compulsory voting be enforced on campus? There’s the age-old adage that people, particularly young people, express particular disdain for anything they’re forced to do. On the one hand, compulsory voting could encourage more people to dip their toe in the water of civic engagement, but alternatively it could alienate people and thereby exacerbate the problem of the union’s already waning student engagement.

Perhaps instead of asking “can we get everyone to vote?”, be it by technology or mandate, we have to ask: should we? Can you force people to be politically engaged? Many would say it’s a privilege to even have a students’ union – many countries don’t, or if they do, they don’t have the same national platform that is granted Irish students’ unions. And, arguably, with privilege comes responsibility.

Democracy grants citizens the right to express an opinion, but does that extend to the right to not have an opinion? In my own experience, being an informed citizen – and student – can be overwhelming. Whether it’s national or student elections, politics is astoundingly negative, and I don’t believe there’s anything wrong with tuning out from time to time to preserve one’s sanity. There are multiple ways to encourage more students to turn up and vote, but ultimately, we can’t force them to if they’re not interested – nor should we.