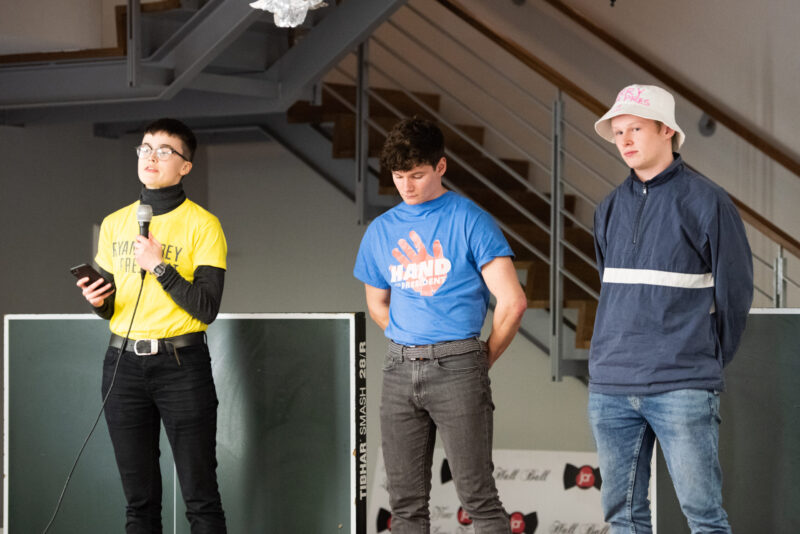 Those who have enjoyed some of the more dramatic moments of this year’s Trinity College Dublin Students’ Union (TCDSU) election hustings will likely have been disappointed with tonight’s uneventful gathering out at Trinity Halls.

With discrepancies in polling leaving open intriguing outcomes in more than one race, tonight could have provided illuminating moments in a race that’s overall not been shy on them. But gentle questioning meant candidates weren’t forced out of their comfort zones, and the lack of actual Halls residents in attendance could have prompted some to wonder if the hustings achieved anything at all.

This, of course, wasn’t entirely the candidates’ fault, but it was hard to spot a standout performance – even after the presidential debate eventually got serious with a number of questions from the audience. Given that several races could be poised on a knife edge, many will see this evening as an opportunity missed.

In a hustings that proved more challenging for the presidential candidates than any other, all three candidates gave adequate performances – but none stole the show. Ryan Carey relied heavily on his union experience and wider grassroots activism, which worked well in a debate where housing was a major issue of debate. Eoin Hand failed to convey his previous enthusiasm or energy, coming across as somewhat vague on certain topics.

Harry Williams had probably his strongest debate yet, with some personal touches about his own experiences with student housing, but failed to build any serious momentum when his favourite topic, the Union of Students in Ireland, was brought up yet again.

In many ways tonight brought the presidential race full circle, with a startlingly rigorous debate about the role of a political union. Carey, arguably the strongest on these questions, was solid if unspectacular – probably not enough, given how far back he is in the polls. Hand failed to impress for the second consecutive hustings, with answers that attempted to be the best of both worlds and ultimately fell through the cracks.

With the candidates being thoroughly questioned on their experience of working with decision makers, Carey again leaned into his union experience. This time, he came across as capable and self assured. Hand danced around the question, unable to match Carey with any concrete examples. Predictably, Wiliams was upfront about his lack of experience, but as always backed himself to find the solutions to whatever problems he might confront as president.

Overall, the four hustings have done little to illuminate anything that couldn’t be learned from their manifestos. No candidate impressed enough to have a major impact on the result of the vote.

No stranger to student life off campus, final-year nursing student and sole TCDSU education candidate Megan O’Connor gave a cool and collected performance tonight, in a subdued Halls affair that did little to undermine her claim to the education title.

Pledging to play an “active role” with the oft-neglected Halls community in order to improve engagement levels and Halls students’ experience of first year, O’Connor once again stressed her commitment to accessibility. Stating her desire to be a “familiar face” rather than just “an email” to first year students, O’Connor said she wants to become truly “part of this community” in order to make the task of resolving academic issues “as easy as possible”.

O’Connor – drawing comparisons between the struggles that health science students endure while on placement and the experience of first-years fending for themselves in Halls – emphasised that accessibility “is something very close to my heart”. However, repeating a habit that she has formed over the course of the campaign, O’Connor’s address was less specific, and more earnestly rhetorical.

In a hustings where a soft line of questioning defined the evening, O’Connor was one of the few pushed on the finer points of her manifesto. Her answers weren’t always rich in detail, but they did enough to see her over the line without mishap.

Off the back of an overwhelmingly positive result in polling results released by both The University Times and Trinity News this afternoon, Leah Keogh would have been forgiven for approaching this evening’s hustings as a mere formality. However, she produced another solid performance, building on last week’s groundwork.

Keogh was one of few candidates to impress tonight, with a pitch that didn’t reinvent the wheel but did enough to cement her status as a welfare officer in waiting.

Engagement with consent workshops dominated the debate. Keogh was stronger on this question tonight that she had been at previous hustings. She talked up “incentivisation” methods, including using student timetables to promote workshops – something that would foster a greater awareness of the Union’s consent programme in her estimation.

Addressing the question of mandatory consent workshops – something that came up at last week’s Media Hustings – Keogh maintained that the Union needs to “tread carefully”, given the “triggering nature” of the subject.

Tonight was routine for Keogh, and her relaxed nature on stage tonight reflected this. Using it as a platform to patch up gaps in her manifesto points, tonight’s hustings will only work to her favour when students go to the polls this week.

Tonight’s questioning further consolidated the pattern that has emerged during the communications and marketing race – both candidates shine best when speaking on fleshed-out manifesto points, but struggle when questioning veers away from rehearsed answers.

Although Philly Holmes may have triumphed in today’s poll results, it was Hiram Harrington who came out on top tonight. Choosing, as always, to take a more informal approach to questioning, Harrington was the more effective communicator of the two.

Although marketing has remained on the back-burner for the majority of this campaign, the incumbent communications and marketing officer Muireann Kane took the opportunity to quiz the candidates on their plans to grow union sponsorship, in a valid – if predictable – question. Holmes seemed reluctant to dwell on the less glamorous side of union sponsorships – namely, its reliance on large scale corporations. Harrington, meanwhile, said that they “hate the word corporate”, which came across as slightly naive, but predictable for a candidate who has made ethical sponsorship the backbone of their campaign. In the end, however, both candidates may be forced to face the simple fact – large-scale corporations’ sponsorships are vital for the longevity of TCDSU.

It will be up to voters this week to decide between the two strategies – Holmes’s polished, if somewhat forced approach to appealing to the student population, or Harrington’s slightly gauche, although overtly amiable method of attracting votes.

Uncontested Ents candidate Hugh McInerney, brought nothing new to the table during his address at this year’s Halls Hustings. In a rushed and repetitive speech, McInerney gave a whistle-stop tour of his vision for the role before hurrying off to oversee his Ents event.

While McInerney, a former JCR candidate, will likely have endeared himself to the crowd with an admission that he was running “the wrong race with a few too many cans in me”, this was arguably the most impactful point of his speech.

Predictably enough, he returned to what is clearly his favourite topic: his plan to introduce Sober October to the ents calendar. However, his brief speech was noticeably tailored towards the Halls community – he expressed his wish to ‘‘make sure that the JCR are as involved as possible’’ and to publicise events better so that no one living in Halls feels left out of the loop.

Polls released this afternoon predicted that McInerney will cleanly win the ents race, something that won’t have come as a surprise to him. However, this evening’s performance from McInerney had a definite air of complacency – he made little effort to stray from the mantras he has been repeating throughout his campaign. But given the safety of his seat, and the flatness of the hustings he was participating in, it’s arguably hard to blame him.

In light of this afternoon’s news – that The University Times has Cormac Watson ahead in the electoral polls, while Trinity News predicts a win for Susie Crawford – tonight’s Halls Hustings were vital for two candidates who don’t really know what their electoral hopes look like.

The result was a debate in which neither really shone. Watson, ahead in this newspaper’s polls, didn’t hit home with a speech that was heavier on journalistic principle than on pitches for votes. He’ll surely feel he left something behind him tonight – particularly given the uncertainty surrounding the polls – and didn’t really get out of first gear.

Crawford, whose lack of experience as an editor has been a talking point this election, was strong on policy points, sticking to her mantra about engagement without discussing journalistic policy. She was comfortable in front of a crowd that seemed altogether ambivalent towards the role of the paper.

While Crawford was the more polished of the pair, the nature of tonight’s debate meant it’s unlikely to have much bearing on the outcome of a race that could be poised on a knife-edge. It could have been worse, but it could have been much better.