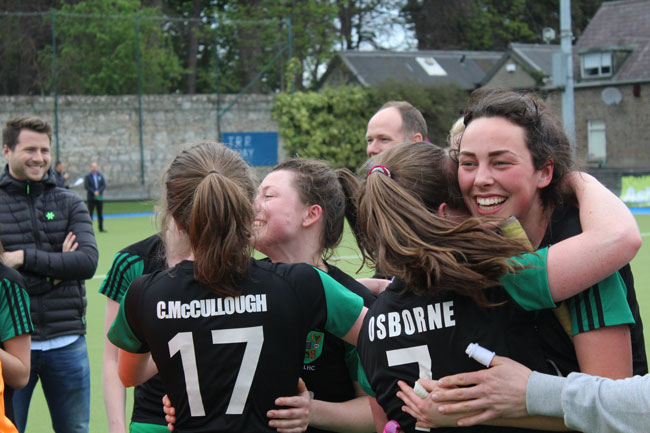 The 2016/17 season will undoubtedly go down as one of the best in Dublin University Ladies Hockey Club’s (DULHC) history. They romped to the Leinster Division 1 title, going the entire season unbeaten. A week after doing so, they paired this incredible achievement with the Jacqui Potter Plate.

However, the best was saved for last, when they faced up against Old Alexandra HC with promotion to the EYHL – the top flight of Irish hockey – on the line.

DULHC had never reached the premier division of the domestic game and, head coach Brian Scully admits, promotion was not on their radar when the season started: “I didn’t really know how competitive we were going to be over the course of the season. There was a lot of uncertainty. We ground out a lot of 1-0 wins at the start of the season, which showed a lot of character, and we built up a lot of momentum.”

This momentum took them into a round-robin tournament alongside Lurgan, University College Cork, Old Alex and Greenfields. After a 3-2 loss to Lurgan – Scully says they “defensively fell apart” that day – Trinity’s destiny was out of their hands.

I didn’t really know how competitive we were going to be over the course of the season. There was a lot of uncertainty

However, they were thrown a lifeline when Lurgan drew two consecutive games. Trinity would play their fourth game in two days against Old Alex, knowing a win would see them promoted for the first time ever. Goalscoring hero Ellie Noone recounts the news of Lurgan’s slip-up filtering into the Trinity camp: “We had a shot to win it if we beat Alex, so that really got the tensions up and everyone was really focused.”

DUHLC had played Alex twice that season, winning at home and drawing away. Despite the high stakes, Scully was quietly confident in his charges: “There was a comfort in playing Alex. We knew what we were getting into. If we played well, we would win and if we played average, we’d still have a good chance of winning.”

Trinity started brightly and pinned Alex back from the first whistle. Scoring goals had been the thorn in DUHLC’s side all season – Scully recounts his feelings as he presided over the opening exchanges: “Ten minutes in I was thinking: ‘We are a good bit better than these and unless something strange happens, we are going to win this.’”

“I had to keep reminding myself not to think like that, because although we were completely dominant in the game, the scoreboard wasn’t reflecting it.”

The breakthrough came seven minutes before the interval from a scrappy short corner. Goalscorer Noone confesses that it was “quite messy”: “The first shot was eventually deflected away off an Alex player and I found myself in the right spot at the right time and was able to slot it past the goalie.”

“We had known that the Alex keeper had tended to dive a lot so once she was on the ground it was easy to just slot it past her.”

“At the start of the second half I remember Old Alex really stepped up the tempo and really putt pressure on us”, Noone recalls. 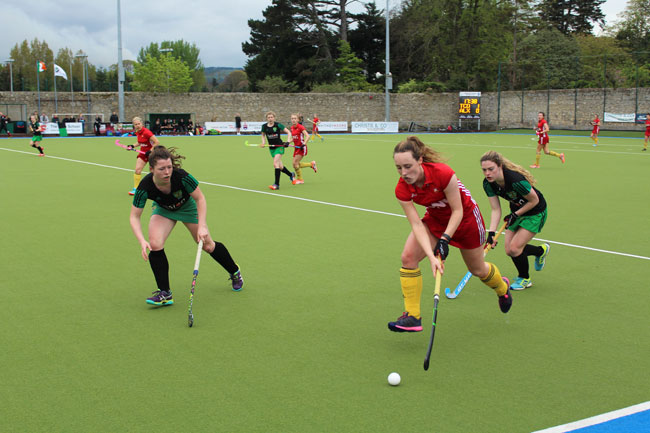 Jake O’Donnell for The University Times

This is something that really made Scully sweat on the sideline: “We had struggled to score goals all season, so at 1-0 with 10 minutes to go we were in a position where we were very close to being promoted, but if Alex score once, or one of our players makes mistake, you are suddenly quite a bit away from getting promoted.”

Scully will be eternally grateful to Noone, then, as her second goal 10 minutes from full-time gave him some room to breathe. A deflected shot fell to Noone in the Alex D, and she showed nerves of steel to lift it over the goalkeeper. The coolness in which she recounts the goal speaks to her finishing ability: “When my first shot rebounded, the keeper rushed out so all I had to do was pop it over her.”

Scully describes the closing stages of the encounter as “surreal”: “It was only really when we scored the second goal that you could kind of relax because Alex got quite deflated.”

“I suppose there was about five minutes of anticipation on the sideline. You start thinking back to pre-season and you can’t believe we’ve gone from zero to 100 in the space of eight months and I’ve only got five minutes to enjoy this.”

He recalls a light-hearted moment on the touchline as the seconds trickled away: “I remember one of our captains was sin-binned with a few minutes to go and as she came off, she was apologising and asking how much longer was left.”

“They [the officials] were saying to me that you can’t communicate with each other, because you aren’t allowed coach a sin-binned player”.

But Scully wasn’t having any of it: “I said to them: ‘Look we’re about to be promoted here – she isn’t going back onto the pitch.’ So, the two of us were stood on the sidelines, having a laugh for the last 90 seconds or so. It was brilliant. Absolutely brilliant.”

Both Scully and Noone put their success in the round robin down to their fitness levels. “We were fit. And that was a huge part of it. Because at the start of the season we really didn’t know our level of players, we had a whole new team.”

“The one thing that I made absolutely mandatory was, because we were a young team, we should be a couple of steps ahead of every other team from a fitness perspective.”

Arriving at this level of conditioning meant double sessions on Saturdays. Noone heaps praise on her teammates for their dedication to the cause: “It was really a credit to the girls we had been doing so much strength and conditioning training with the guys in [the] Trinity gym. That really helped, and it became a match of fitness and we began to dominate the game again towards the end.”

In the end it was a relatively comfortable day’s work for Trinity, although their coach jokes that it should have been smoother: “My only regret about that game was that we didn’t win it 4-0 or 5-0, which we would have deserved to. I don’t really mean regret, but it just would have spared my nerves!”

DUHLC had gained promotion to Ireland’s elite hockey league and the full-time celebrations matched the achievement, as Noone recounts: “The celebrations were really good – everyone’s parents were there. It was a real family affair. It was definitely one of my highlights from first year. I was only a first year and few of us had started at the same time and there were girls who had been there for a few years working away, trying to get promotion, so it was a real team effort.”

“For us, the freshers at the time, it was just amazing to do this in our first year but it was really gratifying to see the responses from the girls who had been there for three years and had worked so hard all the way through. It was really an emotional time.”