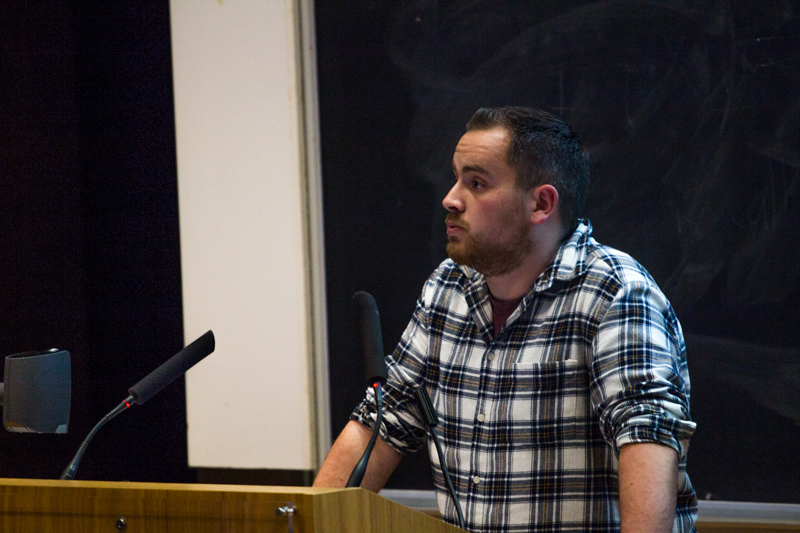 Diego Coyle Diez was virtually unknown in Trinity’s sporting circles when he stood up to speak at the end of a Dublin University Central Athletic Club (DUCAC) AGM on October 12th, 2018.

What he’d heard was confirmed to him that night as he looked around the Edmund Burke Theatre.

“There was a vote for some position and I remember the ballots being handed out and, before the speech even went, I could see over half the room filling out the card.”

“But seeing the majority of the room do that, I’m like: that’s not the reason for this. We should be voting for the people who say they will be doing best. And I didn’t feel that. And I was really upset.”

I was literally, basically laughed out of that room. I remember leaving that, and feeling shit. And you can quote on the word shit on that

To him, it seemed that everyone that walked into the room knew what way they were going to vote before anyone took to the podium to speak.

He wasn’t the only one, either. On that same night, Brian Ó Ruairc was vying to be re-elected to the position of senior honorary treasurer. He wrote in his speech that he was aware most members present had “already been told what way to vote”. Ó Ruairc ultimately lost the vote to John Bolton, a former member of Dublin University Boat Club (DUBC).

At the end of the AGM, Coyle Diez put forward a motion, proposing change to a voting system that he perceived to be completely unjust.

“It just seems unfair that a club that’s trying and striving its best, but has a limited amount of numbers, doesn’t have an equal say to a club that can bring double the amount”, he said at the time.

“It wasn’t received all that well”, recalls Jemil Saidi, DUCAC’s chairperson. Saidi had just been elected to the position of vice-chair: “Even from the students’ perspective as well, they kind of laughed at the idea of it.”

Donagh McDonagh, then-chair of DUCAC, shut down Coyle Diez’s proposition. In McDonagh’s view, a constitutional amendment was “not a matter” for the Any Other Business section of the AGM. He said such a change would require the “whole student body” to vote on it.

DUCAC’s constitution, some of which was written by McDonagh, has no mention of campus-wide votes.

“I felt shit after that”, Coyle Diez says. “I was literally, basically laughed out of that room. I remember leaving that, and feeling shit. And you can quote on the word shit on that, because that’s how it felt.” 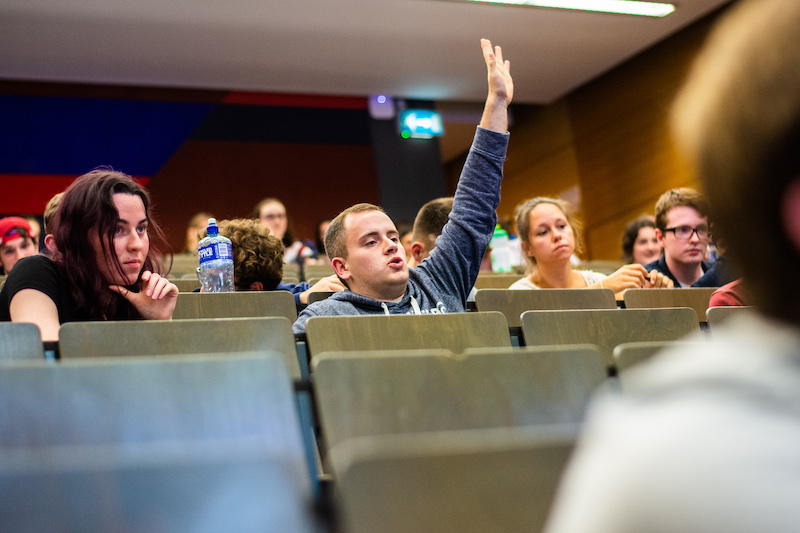 Coyle Diez caused quite a stir at last year’s DUCAC AGM, but came away happy after Jemil Saidi was elected chairperson of the organisation.

“I remember leaving that room after [McDonagh] interrupted me, and I was like: what gives him the right to do that? I said a concern, and instead of being like: ‘OK, try fix it’, being like: ‘You’re wrong. You’re inexperienced.’”

It touched a nerve. For much of his life, Coyle Diez was told he would not succeed.

“I have reports saying that I was low-level intelligence, recommendations I should go to special-needs schools. Not that there is anything bad about going to those, but I was constantly told since I was young that I would not achieve anything.”

During his second-level days, he changed schools because he felt he wasn’t receiving the supports he needed. And yet, even at his new school, he was met with barriers.

If these schooling experiences affected him negatively – and they almost certainly did – Coyle Diez doesn’t mention it. He took an approach that, it many ways, epitomises his outlook.

“At some point, I was like: ‘Fuck this. I’m going to prove everyone wrong.’”

Coyle Diez enrolled in Maynooth University in 2012, where he began a degree in psychology. He was offered a place on the Maynooth Access Programme, an initiative that provides supports to students with disabilities, those from disadvantaged socio-economic backgrounds, and those from ethnic minorities.

Rose Ryan is the director of the Maynooth Access Programme. She met Coyle Diez and his parents at an orientation event for the programme in his first week of college.

Ryan remembers how anxious Coyle Diez’s parents were for him beginning university: “They were really hopeful for Diego but maybe the sense kind of was: don’t be too surprised if it doesn’t work out for him.”

Even Coyle Diez himself was apprehensive. “When he started college, he wasn’t sure”, Ryan says, “because a lot of his skills and talents were only starting to develop, and a lot of skills that he had … second-level school doesn’t necessarily value charisma. It doesn’t value volunteering. It doesn’t value style and substance. It largely values rote learning”.

Maynooth Access Programme, in comparison, valued Coyle Diez’s strengths. For the first time in an educational setting, he was afforded the facilities he needed to flourish.

“[Rose] was one of the main ladies that made me believe I had more potential than I believed I had. She’s the one that was like: ‘Diego, you have all the potential in the world’”, Coyle Diez says.

It was also at Maynooth that Diego took up a new sport – archery. He went from almost quitting the sport to becoming club captain in his third year. That year, the club grew to become the largest in the university, boasting a membership of over 500 people.

“I was able to make the presence of archery in Maynooth a lot bigger. And it was that year that we won best club in Maynooth. I tried to do a lot of things, but they failed. But like anything, when you try to do things, some things work and some things don’t. You just have to keep trying.”

Although it might not have been immediately clear to him then, there were people within Trinity’s sporting community that agreed with what he was proposing at that first AGM in October, 2018.

Aidan Kavanagh, administrator at DUCAC, sat nearby while Coyle Diez raised concerns at the end of the meeting. “Diego felt that it needed to be addressed. I think he was speaking for more than just himself. I’d say he was speaking for a few individuals.” 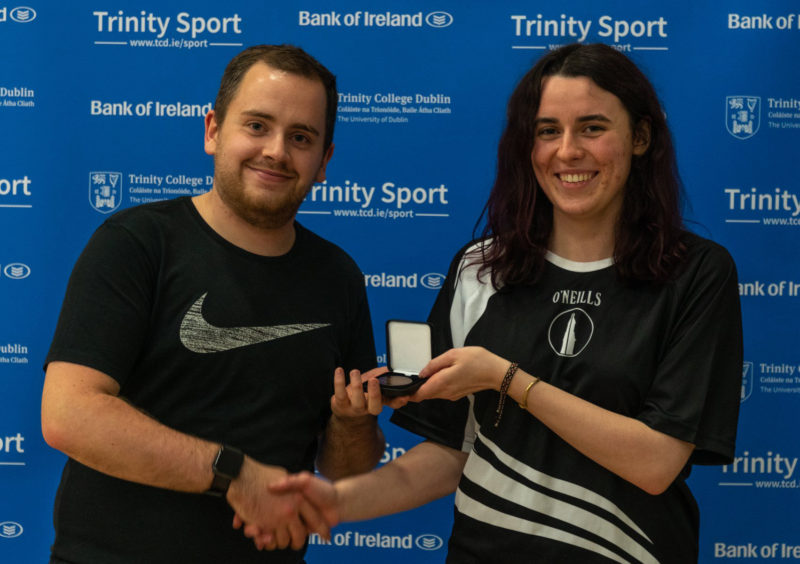 DUAC took home Club of the Year in 2019, after Coyle Diez took over as captain in his first year in Trinity.

“It started discussions. Maybe he gave it a face and gave it a name. And maybe he empowered other students to stand forward.”

In the months following the AGM, Coyle Diez looked to educate himself on the structures – and bureaucracy – of Trinity Sport and DUCAC.

“I was trying to find more information, and obviously I wasn’t able to find it. There was missing documents, missing information.”

“There were high transparency issues … why couldn’t clubs know how other clubs were funded? Why did some clubs get more money than others? There were never any clear guidelines”, he recalls.

When he tried to tackle these issues at the table of DUCAC’s captain’s meetings, he found himself clashing with McDonagh again.

“To me personally, it felt like he had a style where he put everyone down so he could lead. It was to make everyone else feel inferior, so that he was the smartest person in the room … he’s good with his words – he is a lawyer, after all.”

At some point, I was like: ‘Fuck this. I’m going to prove everyone wrong’

(The University Times attempted to contact McDonagh several times – through DUCAC, Trinity Sport and DUBC – during the reporting of this article. He didn’t respond to requests for an interview.)

After his skirmish with McDonagh at the captain’s meeting, Coyle Diez opted to seek out other dissenting voices within Trinity’s sporting community. During the year, he organised meetings of various club captains where he put forward his vision of a reformed DUCAC.

Jemil Saidi attended one of these meetings during the year. Saidi paints a picture of a Coyle Diez changed from his secondary school days, from his first week at Maynooth. What remained was his unwavering determination.

“He was very charismatic and obviously again very passionate about it … I think, after that meeting, I got more of a sense of what Diego was trying to bring in and was trying to fight for.”

“That’s when I started thinking that: ‘You know what, we need to bring about a change in DUCAC.’”

By September 2019, Coyle Diez had completed his master’s degree, and saw DUAC win Club of the Year at the annual Trinity Sports Awards. He was now toying with the idea of running for the position of chair at the DUCAC AGM, due to take place at the end of the month. 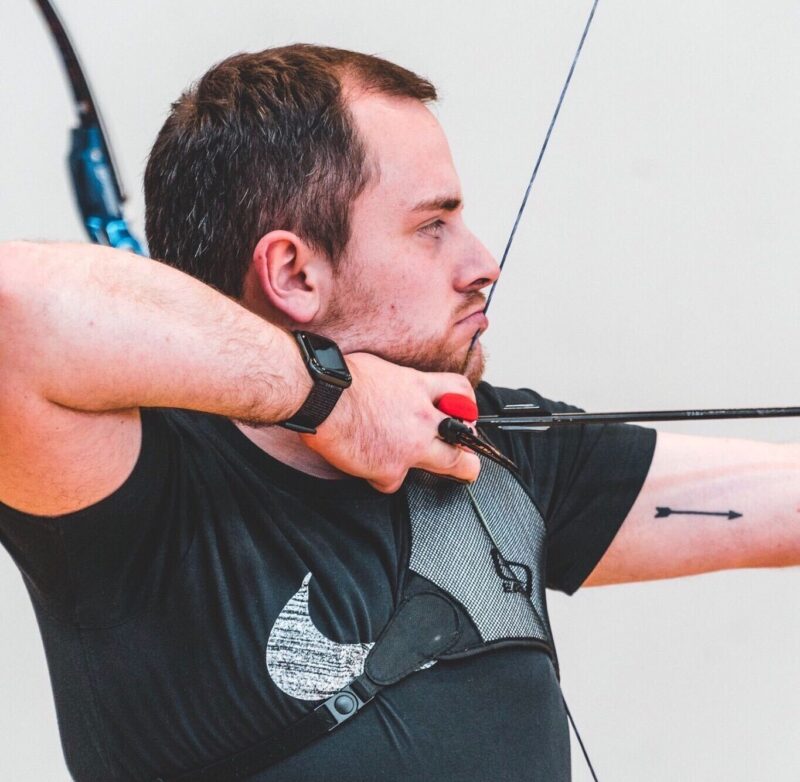 Coyle Diez had never tried out archery before coming to Maynooth University, but it would become central to his college experience

However, after a phone conversation with Saidi, he decided that the best port of call was to let the current vice-chair run against the incumbent McDonagh.

“I talked to [Saidi] and he seemed to have the same goals as me … they were a bit different, but then again, no one is going to think exactly the same as each other, but they were aligned to the same goaL of having every sport be treated equally. And every sport given the chance to succeed.”

Saidi went on to defeat McDonagh by a single vote, becoming the first student to ever hold the position of chair in DUCAC’s 100-year history. McDonagh, a symbol of DUCAC’s old guard, was ejected in favour of an inflected brand of Coyle Diez’s egalitarian voting system and transparency.

Michelle Tanner, head of Trinity Sport, writes in an email to The University Times that Coyle Diez “ultimately enabled change” within DUCAC.

“Diego had ideas on how sport and DUCAC could improve and he always appeared to do his best to ensure students had a voice in the future direction of sport, even if he was against the odds.”

Kavanagh saw this change as positive: “Everything changes, everything has its moment and everything, kind of, moves around… seeing students stand up and get involved and wanting to build and to help things, it is a good thing in my eyes, yeah.”

After the AGM, Saidi and Coyle Diez didn’t speak much – once or twice perhaps, and “nothing in the area of policy change”.

“In hindsight, you could almost say that maybe he saw that me being elected… maybe he felt as though I was someone who would continue that charge he’d set”, Saidi muses.

“I think, to me, [Coyle Diez] will always be seen as the guy who challenged DUCAC. Not just the person in charge of it, he challenged it in a way that it could do better for the students it’s representing … I think that would be his legacy.”

Coyle Diez is now in America, far removed from the archery hall on the third floor of the Sports Centre and the Trinity Sport offices. Now is the time for others to take up the mantle, the drive for change.

“I did what I had to do. I believe I set the right path now for other people to realise that they have the potential to do the same thing I can do.”