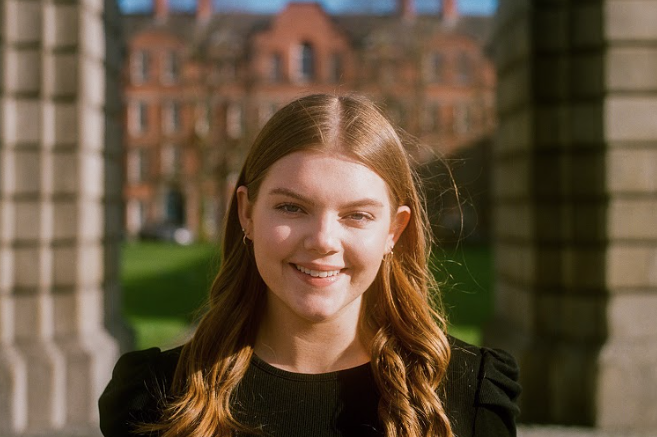 Leah Keogh has been elected Trinity College Dublin Students’ Union (TCDSU) president on the first count – receiving 57.8 per cent of the vote and a total of 2,313 votes.

Keogh – this year’s TCDSU welfare and equality officer – ran a campaign emphasising her experience and the need for quality student services. A veteran of TCDSU, Keogh consistently spoke of the need to elect a president who has union experience and will “hit the ground running”.

This is the first time since 2003 that a TCDSU welfare and equality officer has subsequently ran for the position of TCDSU president.

Speaking on the election livestream after the results were announced, Keogh said: “I feel relief” and stated that herself and the other candidates had “been put through the ringer”. Keogh also congratulated her two opponents Ben Cummins and Luke Macquillan, describing them as “great lads” and that she hoped to “see some of their policies carried through”.

Throughout the campaign period Keogh focused on continuing the projects she’s already working on given “the constant turnover, that revolving door of sabbatical officers”.

Issues Keogh has already worked on such as consent and sexual assault played a big role in her policies and she disclosed that she is currently “working closely with the consent intern to create an online module for consent that will be made available to all first years coming into Trinity, through Blackboard”.

Cummins – a fourth year BESS student and former JCR president – ran on a platform of building back community following the drastic effects of the coronavirus on student life.

MacQuillan – a third year PPES student who does not have previous union experience – ran on a platform of engaging students who wouldn’t normally get involved with TCDSU and supporting student ideas and campaigns.

Results for this year’s TCDSU elections were announced this evening following a campaign period of just under two weeks. Voting opened at 8pm on Wednesday and closed at 4pm this afternoon.