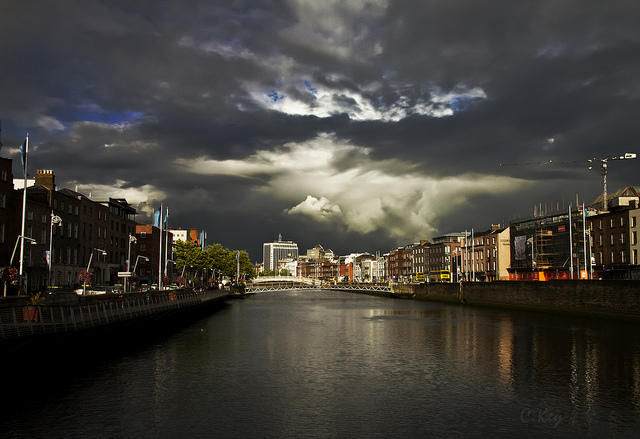 The loss of the Dublin I once felt at home in was less like a sudden breakup, and more like old friends gradually drifting apart.

In the same way that some long-overdue catch ups make you realise a rapport is no longer what it once was, my love affair with my city reached its breaking point this summer. I recall a June evening somewhere between Dame St and George’s Arcade, attempting to enjoy a pint with friends, when unwelcome feelings in the capital overwhelmed me.

But upon reflection, it must have been an accumulation of things. Once my beloved 15a bus route (I am a fan of Dublin Bus), reaches the end of Rathmines and breaks into city-centre territory, it passes a number of saddening sites. The stretch of canal whose banks accommodated many a fond sunny evening was partly barricaded by intimidating metal fencing. The areas untouched by such barriers were sparsely occupied, due, I’m sure, to the presence of fences reminiscent of bottom-of-the-stairs baby gates, or the regular interruption by Gardaí to ensure “everything alright?”. Which it is, granted you don’t mind being asked to move along.

Also visible as the bus traverses over the canal bridge is what has come to feel like a “you’re entering Dublin” sign – the loom of cranes erecting a concrete dystopia upon the graves of places that were once bustling hubs of culture.

As the bus journey grows ever more melancholy, we drive by the spot where the Bernard Shaw once lay, its dilapidated remnants having paved space for – probably – a hotel.

The loss of the Bernard Shaw is a grief shared by many of Dublin’s young population – not only because we are now one alcohol-consuming haunt poorer, but we’ve lost a beloved cultural landmark. Following other venues such as Hangar and District 8, the Bernard Shaw was another victim of demise in a city already deprived of cultural and creative spaces. What made the end of the Bernard Shaw particularly poignant was its reputation as a place of acceptance and self expression, where nobody was denied a good time. Its vicinity was once adorned in colourful street art, often providing a canvas for artistic political statements, badging solidarity with social movements.

I can only look back fondly on photos I have of messages scribbled on the pub’s walls or toilet doors. Most commonly, compliments to the reader and reminders of our intrinsic value as humans. It was this sentiment that an entire demographic felt was demolished along with the walls of the Bernard Shaw – our value as citizens.

The places that aren’t fenced off or shut down are often unwelcoming at best and intimidating at worst to young people. Last week, around 200 teenagers and young adults protested – twice – outside the Temple Bar pub following an alleged assault on two skateboarders.

Their demands were by no means unreasonable: “We just want them to come out and apologise, to explain themselves”, the organiser said.

Long before the pandemic hit, spaces for young people in Dublin were beginning to diminish. For a considerable time, the prospects for socialising have been limited to only a few quality venues, from which current licensing laws would force us to leave by 2:30 in the morning, one of the earliest closing times for clubs in Europe.

Drawing nearer into the heart of the city centre, the dismal atmosphere of a city becoming characterised by inequality grows stronger. As a Dubliner, my adolescent years witnessed the steady rise in homelessness, from noticing the odd rough sleeper here and there, to the current sea of tents, sleeping bags and desperate faces which cling to our inner city. The news serves to remind me of the stark figures of homeless families and asylum seekers living in direct provision (if you were wondering what all the hotels are being used for).

The prospects for socialising are limited to only a few quality venues, from which current licensing laws would force us to leave by 2:30 in the morning, one of the earliest closing times for clubs in Europe

Due to the long-term severity of the housing crisis and my frequenting of the city centre, I’ve come to recognise some of the faces of rough sleepers, their expressions imprinting on me just how far this city has fallen in how it treats those who are down on their luck.

What accompanies the let-down inhabitants of our streets is an ever-increasing number of spaces that the pandemic has brought the end of, that were destined not to survive any economic hiccup. In shopping areas like Grafton St and Henry St, there are gaps, like knocked out teeth, where charming shop fronts once stood. Of course, franchises and chains stand proud and unaverred, their corporate monstrosity able to withstand the massive blow that was the coronavirus pandemic.

It was in the presence of a frail and waning Dublin city that I found myself attempting to socialise many an evening this summer, only to be met with the sour-tasting reality of what is becoming of the capital. It’s a reality which has culminated in a palpable tension, manifested, I believe, in the scenes like the skateboarders’ protest. Young people are fed up with being seen as a nuisance.

It was in the presence of a frail and waning Dublin city that I found myself attempting to socialise many an evening this summer, only to be met with the sour-tasting reality of what is becoming of the capital

Where does all of this conflict, often between younger and older demographics, originate from? I believe it to be based on two grave misconceptions: that young people are granted sufficient space in the city to flourish, and that their reactions to current affairs are unjustified and overly emotionally charged.

Witnessing such scenes both before my eyes and circling around Twitter broke my heart, not only because I’m desperately disappointed at the destruction of public areas, but because I empathise with those who have found themselves in these crowds, wondering where it all went wrong.