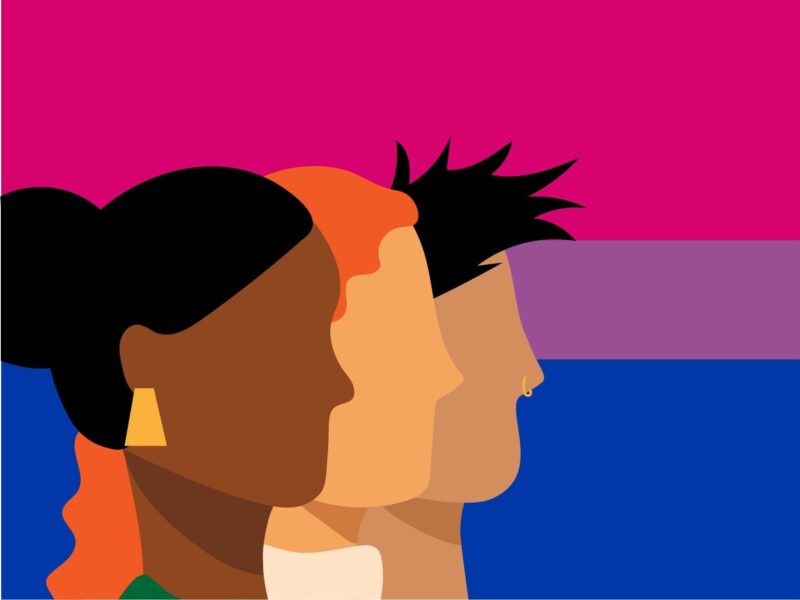 Illustration by Tara Coakley for The University Times

Being bisexual is strange.

These notions, concepts and lies are at the heart of the difficulty of the bisexual experience. Very often when a bi person reveals their sexuality, they can sense most, if not all, of the thoughts that run through the listener’s head. Bisexual people have higher rates of depression and anxiety than gay or straight people. Some 77.6 per cent of bisexual individuals surveyed for one study had considered suicide at some point in their life, compared to 13.3 per cent of the general population.

Bisexual people experience homophobia to a varying extent. As always, depending on whether the person is in a queer relationship or if they “pass” as straight. The troubles specific to bisexual people can be different: they will depend on the person and no experience is more valid than another.

Even outside of discrimination, as a community that doesn’t have a lot of representation or discourse about our shared experiences outside of queer-specific online spaces, bisexuals exist at a confusing social intersection in a heteronormative world.

I (Maitiú) was at a party with a few of my female friends and some men made a comment – in an attempt to impress the girls, presumably – about how I shouldn’t have been dancing with them. Surely they would not make such a comment if I passed more as a gay man or if they were male friends. The comment made me hyperaware of how I was interacting with my friends, who as always, were entirely unfazed dancing with me – but, like me, were uncomfortable with the guys’ comment, and told them as much in no uncertain terms.

Was I welcome? Were my friends okay with me having fun with them, or should I refrain from dancing with them because I am a bisexual man?

There is an assumption that, since bisexual people have no gender category which they can wholly disregard as sexual, everything and everyone is sexualised

On the other side of the coin, with straight male friends, physical contact-led banter leads to your queerness becoming hypervisible – leading to a strange, sexual orientation-based exclusion. This can also look like exclusion from jokes between those friends about how much they want to have sex with each other, which in group situations feels like everyone saying over and over again: “You’re too gay for this.”

The fact of the matter is, since bisexual people are attracted to more than one gender, they pretty much never see their friends as sexual beings in any capacity. For straight people, since it is so easy to characterise one gender as platonic and another as sexual, there is an assumption that since bisexual people have no gender category which they can wholly disregard as sexual, everything and everyone is sexualised.

While I (Jack) was building up the courage to come out, I was scared of social rejection. In an all-boys school, where “gay” was thrown about as an insult, I thought my attraction to men would be a stick to beat me with. Much to my relief, very few people took issue with it at all. Things were great. I could be myself.

Unfortunately, a few months later a friend confided in me that many of my friends believed I was actually gay, not bi. They assumed I was scared to come out as gay because I thought if I didn’t pretend to like girls then I wouldn’t have enough in common with the lads. Or I was confused. Or it was just a phase.

While validation can and should come from the inside, internal validation is much harder to find when this external invalidation is so present. Straight men, particularly, are much less likely to “believe” in bisexuality, as if it’s something people can choose to believe in – like an elliptical earth or Australia, especially among bi men. The mistake can be easily explained away by patriarchal sexual expectations. There is never any discourse on whether gay men actually like men, although lesbians are constantly accused of “not having found the right guy” or faking it. Similarly, in bisexual people, the perception is skewed to male, bi men and women faking their attraction to women – because the only people validly allowed to be attracted to women are straight men, apparently.

In an all-boys school, where “gay” was thrown about as an insult, I thought my attraction to men would be a stick to beat me with

Duly, the bisexual experience can often be riddled with self-doubt. Just last year I (Maitiú) was told by a well-meaning friend that he had learned from a scientific study that bisexual men aren’t real and told me I could come out “properly” to him. The scientific study in question has been disproved since, and also by, at the very least, the very existence of the two men behind this article.

Sometimes biphobia can present itself in the guise of “sexual preferences” where people rule out possible romantic or sexual partners based on the number of genders the potential partner is attracted to. This obviously is incredibly degrading for queer people. Why does it matter who else we’re attracted to?

A few months before I (Jack) came out, a group of my friends played a game where we would vote for most or least likely to do an array of things. I was voted least likely to cheat. After I came out, we played a game where one person would pick the person most likely to do things. The girl who was asked said I was most likely to cheat. I was confused and asked why she picked me. Her answer? “Well, you’re bisexual so it’s obviously you.” Another time, I told a girl I was chatting to that I was bisexual, and after I confirmed I had been with men, she blocked me.

I (Maitiú) had similarly gone on a few dates with a girl and she didn’t know I was anything other than straight. On one occasion, I said something about an ex of mine, who was male, and she very quickly made an excuse to not see me again. Obviously, it’s good to dodge these bullets anyway, but they are upsetting at the time.

Biphobia doesn’t exist solely in the heterosexual sphere. Misconceptions will lead people away regardless of who they are. Whether it’s other queer men nonchalantly telling you that “being bi won’t last long” or “I used to think that too, it doesn’t exist”, it becomes clear quickly when people are biphobic

I told a girl I was chatting to that I was bisexual, and after I confirmed I had been with men, she blocked me

Misguided friends have told both of us they thought that bisexual people end up choosing a gender if they end up in a monogamous relationship with one person. A married friend does not share a post about Bi Visibility Day, “despite” being a woman married to a woman. She is still bisexual, in the same way that if two people with black hair are married, both can still find an attraction to people with blonde hair.

Representation of bisexual people in the media has risen steadily over the past few years, but this comes with the accusation of self-promotion, of faking it, or being deliberately ambiguous, to further their careers. But even then, gender comes into it. Harry Styles and Joshua Bassett are accused of feigning bisexuality. Jojo Siwa and Lili Reinhart are not.

Take it from two bisexual men: The only time you ever need to care about someone else’s sexuality is if you want to know if they have the possibility of being attracted to you.