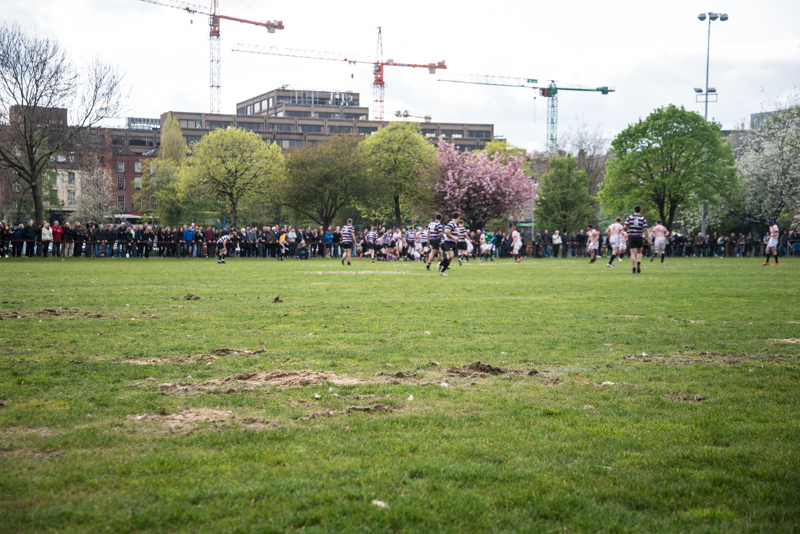 Sinead Baker for The University Times

“I talked to the doctors, and they didn’t tell me what to do. They just explained to me what studies have gone on, like in the NFL, and then just the amount of times that he said depression, suicide, you know, words like that.”

These are not words you would necessarily expect – let alone want – to hear as a 20-year-old college rugby player. Yet, in January 2019, this was exactly what Trinity physiotherapy student Rory Clarke heard.

It was also what forced him to give up the sport he had both played and obsessed over for well over half his life.

The question which then likely springs to mind is: how did it get to this point?

“I was leaving school with, I think, four or five and then they were like official ones because there were other ones that didn’t really get classified, or I was playing bulldog, or I felt like ‘I [was] fine so I just said nothing.”

I started seeing stars, and like going a little bit blind in my peripheral vision

When Clarke started in College, he sustained three more concussions over about seven months, leading him to take a few months out. “But then what happened was, it was like a really light knock, I was in a ruck and I got a foot to the head or something like a foot to the chin. And I started seeing stars, and like going a little bit blind in my peripheral vision, which is actually quite normal because I get migraines, so I thought: ‘Oh, it’s just like trigger migraine or something’.”

“Then I started getting sick that night [which had] never ever happened to me before. So I realised if it’s happening from a lighter knock, and I’m getting worse symptoms, I’m becoming more susceptible, and a concussion is having a worse effect on me.”

It was at this juncture that Clarke decided to see a doctor.

“It had been in my head not to stop playing, but I was aware that I was getting too many.”

An exceedingly difficult decision – one which could end up in the immediate termination of his rugby career – then surely lay in store?

“It wasn’t that it was a difficult decision in the sense that it was so straightforward – no, it was really easy to make the decision!” assures Clarke in response to the snort of disbelief down the phone.

It had been in my head not to stop playing, but I was aware that I was getting too many

“But it’s been tough since not being able to play”, he goes on to admit. A remarkably sanguine response, whose placement in the understatement category would unlikely be disputed.

Even so, when one considers the words of forensic pathologist and neuropathologist Dr Bennet Omalu, the straightforward nature alleged by Clarke surrounding his “retirement” decision does not appear feigned.

Omalu’s story was dramatised into a film: the unambiguously named Concussion, in which he was the main character, played by Oscar nominee Will Smith.

Following his research into the sudden deaths of several former NFL players – players who had also suffered from severe mental health issues, including suicide attempts and degeneration of cognitive functions before they died – Omalu was the first to discover and name Chronic Traumatic Encephalopathy (CTE) as the cause.

CTE can be induced when one receives numerous small blows to the brain. These are sometimes known as sub-concussions. Sub-concussions cannot be detected on the pitch, or in any post-match examination.

Omalu’s stance – articulated in an emailed statement to The University Times – would likely do little to persuade others in Clarke’s position of the sense in stoically playing on: “Anyone who plays high-impact, high-contact sports will suffer permanent brain damage even after one season of play. Every brain injury is permanent and can manifest with symptoms, up to 40 years after suffering the injury. There is no safe violent blow to the human head.”

Given Clarke’s 11 prior concussions, in describing his decision to stop playing as “straightforward” he may have actually deployed a more appropriate adjective than it first appeared.

Clarke is far from unique in his experience of having to stop playing. Indeed, in many ways, he is actually lucky in that he was alerted to the fact that he could stop – before the damage became too permanent.

Not all players have benefitted from such guidance. Or when they did, it was too late.

Former Welsh Rugby Union player Adam Hughes, now aged 31, was forced to retire from the professional game when he was 28. In light of the eight complete knockouts he suffered as a player, one needn’t look far to uncover what prompted this premature departure.

Unlike Clarke – whose reaction to the doctor’s advice was “not anger … no one’s ever forced me to play” – Hughes felt somewhat more aggrieved.

“Strict guidelines [are needed] regarding players having to leave the field to play if they suffered a head injury, or proper assessment once they’ve left the field so they don’t return.”

Anyone who plays high-impact, high-contact sports will suffer permanent brain damage even after one season of play. Every brain injury is permanent and can manifest with symptoms, up to 40 years after suffering the injury. There is no safe violent blow to the human head

“In the amateur leagues, education needs to be the priority, as players or coaches don’t fully understand when somebody has suffered a head injury.”

Hughes recently joined a group of eight players – who too have been diagnosed with early-onset dementia and CTE – in filing a claim against World Rugby for negligence.

This is not dissimilar to the initiative taken by a group of former NFL players – who started a class action against the league and won a settlement worth about $1 billion following Dr Omalu’s findings.

“Guidelines and protection should’ve been brought in to help players in the professional era”, says Hughes.

Worryingly, Hughes is not alone in his experiences. Rylands Law, the firm representing the players, are also in contact with over 130 other ex-players who have expressed interest in the claim. And these are just the ones who are willing to speak out, let alone the sufferers who are not.

“You know, you can always look back and say: ‘I should’ve done it this way’” reflects ex-Leinster player and Trinity Strength and Conditioning coach Ian Hirst.

This is also the perspective of many other ex-professionals – including England World Cup winner Matt Dawson – who have spoken out against those filing the lawsuit.

Of course, there is a noticeable difference in the volume and intensity of the rugby played by the likes of college player Clarke, and that of ex-professionals and internationals like Hughes.

“Yes, we had training a few times a week, but a) the collisions weren’t as big, and b) it wasn’t as intense [as professional rugby]”, explains Clarke.

In contrast, Alix Popham – one of the ex-players spearheading the legal case – has been estimated by his doctor to have sustained 100,000 sub-concussions over the course of his 14-year professional playing career.


Most students playing at university haven’t even played rugby for 14 years, never mind contact. Even if they have, it would certainly not have been with the rigour and scale so pervasive in the professional game. Retaining this sense of perspective is key when discussing the future of the university game.

Still, this is not – and will not be – an issue confined to professional players, points out Hughes.

“Hopefully players like myself and the others who have come out to explain how they suffered and will suffer in the future will make players at all levels stand up and take notice. Being a professional means you are likely to take more hits, but doesn’t mean you’re more susceptible to the long-term issues of concussion.”

“It only takes one knock potentially to start off that snowball effect. That can be hard to get rid of. Again it comes down to education and this needs to happen in universities as well.”

Omalu is even more damning in his assessment of the survival of the university game: “Knowing what we know now, no intelligent or smart person will play any high-impact, high-contact sport [at any level]. There are so many other brain-friendly sports everyone can play and get the same level of excitement.”

This is a decidedly stark warning. Yet given the personal limitations now impelled by their respectively cumulated head injuries, the examples of both Clarke and Hughes highlight how perhaps Omalu’s words – though potentially deemed radical by today’s standards – may, in fact, prove to hold water in the coming years and decades.

“Like I don’t know for a fact that I’m never gonna play another game of rugby, no. But not regularly. Like if it was my knee or something, I would just keep playing until, like, it wasn’t there, you know, but with my head, I don’t have that choice”, says Clarke of his newly acquired limitations.

For Hughes, the consequences are more severe. As a player, he was preparing to become a commercial pilot for life after rugby. However, due to the motion sickness he suffers as a result of his concussions, this was an ambition he is now unable to fulfil.

Nonetheless, it is important to note that the grey, darkening clouds depicted above are not without flecks of silver.

Hughes is now a successful financial advisor, as well as a rugby referee (he refereed the 2019 Welsh Schools Rugby Union Cup final in 2019).

Knowing what we know now, no intelligent or smart person will play any high-impact, high-contact sport [at any level]

For Clarke too, there are ladders to accompany what are otherwise some purely prominent snakes.

“[DUFC Head coach] Tony [Smeeth] said: ‘Ah listen, why don’t you just help out with the thirds – they need to like a forwards coach and they need a line out like once just give them a simple package and then work on it with them’ “, relates Clarke of his initial foray into the coaching side of the game.

The ascent has not stopped there. “At the end of the year, Tony was saying ‘Listen Rory, why don’t you come and coach the seconds, be the forwards coach of the seconds’.“

“And that’s great, I get to see all the lads, we get to go to training and I get to be somewhat involved you know … it’s not the same but it’s the best I have.”

It is at this point that Clarke is keen to emphasise how helpful Smeeth, Hirst and the other coaches at DUFC have been – both in helping him remain involved as much as possible, as well as in managing his concussions when he sustained them.