Around 50 Trinity students staged a protest at the Dáil today over the continuation of online teaching, with some speakers suggesting that legal action be taken against Trinity.

Spearheaded by fringe campaign group Students4Change and the Graduate Students’ Union (GSU), the protest saw undergraduates and postgraduates blast Trinity and the government over current teaching arrangements and the lack of access to resources such as counselling.

The group heard speeches at the Dining Hall before walking to Kildare St, chanting: “The students, united, will never be defeated” and “education – not for sale”.

Molnarfi hit out at the prospect of in-person exams being held in the RDS after “one and a half years of online education”.

GSU President Gisele Scanlon told the crowd at the Dáil: “We have paid full fees – for what?” 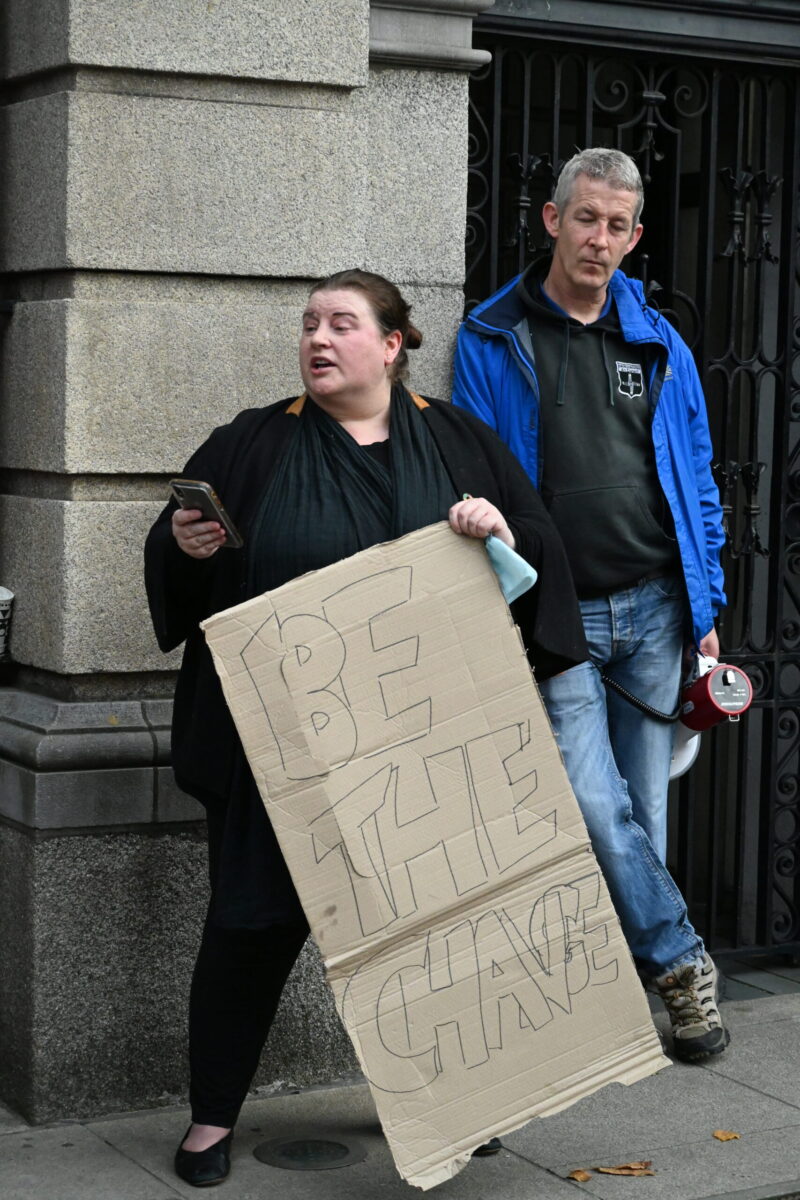 Criticising the provisions for third level in Budget 2022, she said: “The under 22s feature heavily in this budget … what of our mature students? Postgraduates? PhDs who battle high rents?”

“Does the minister understand the diversity of our community?”, she asked.

Speaking to The University Times, Scanlon said that after asking then-Provost Patrick Prendergast for refunds for students, she was told: “It’s the student experience that has been impacted, because the teaching has been delivered … therefore you have received your value for what you paid for”.

Second-year PPES student Jared Reilly told the crowd that students should consider taking legal action, such as a class action lawsuit, against Trinity over its failure to provide a full service in return for fees students have paid.

Reilly, a member of Students4Change, told protestors that legal action “might be the most crucial part” of the movement. He said students have been “defrauded by an institution that they, in many cases, travelled half the world to get to”.

Reilly asked students who feel they’ve been “scammed” to give their names to Students4Change. “If we are to proceed in any type of legal basis, it’s important that we understand who exactly we’re dealing with.”

Speaking at the protest, Roman Cabay, TCD Renters’ Union’s legal representative, said: “In this game, Trinity holds three advantages over us. They hold our money, they hold our diplomas, and they also hold our houses. Individually we have absolutely no power over them as they can take away all these things we are here in Dublin for.”

“However”, he said, “we have all the students and we have all the tenants. If we simply pull all our tiny strengths into a cooperative union, we can develop a power that Trinity must contend with”.

Among the Students4Change groups’ other demands are making the Buttery free for students for the year, LinkedIn Learning packages for business students and refunds for students whose lectures are mostly online.

Trinity College Dublin Students’ Union (TCDSU) did not attend the protest in an official capacity.

Students have voiced their dissatisfaction with Trinity’s teaching arrangements since the beginning of the academic year, as schools and many other colleges return to mostly in-person classes.

The letter said: ““Our students have been patient. We were the first University to close and will be the last to reopen. If teaching does not look significantly different by November 1st, we anticipate extreme backlash from students, parents, government and media & we will be joining them. As far as students are concerned, the whole country will be open, all other Universities will be open, and the College has had months to plan for this.”

Vice Provost Orla Shiels has since written to schools asking them to communicate any potential limitations to a full return to in-person teaching so that resources may be provided.

Provost Linda Doyle had previously committed to scrapping social distancing after October 22nd, but it is unclear what this will mean for lectures.