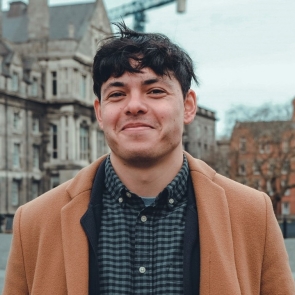 The trial of two dozen humanitarian workers, including Trinity graduate Sean Binder, has been postponed on its first day of proceedings due to a lack of interpreters.

Al Jazeera reported today that, due to an apparent lack of Greek-English translators available, the decision to postpone their trial was made shortly after opening.

The case had been moved to an appeals court because a lawyer is among those accused, according to defence lawyer Haris Petsikos.

The proceedings today were intended to focus on spying charges. No date was provided for the resumption of the trial.

Binder, a trained maritime search and rescue, was arrested in 2018 and accused of smuggling migrants into Greece, money laundering, espionage and membership of a criminal organisation. He had been working with the Emergency Response Centre International at the time of his arrest. The centre was registered as a non-governmental organisation and was engaged with Greek authorities to carry out rescue missions during the height of the migrant crisis from 2016 to 2018.

Mardini arrived to Lesbos in 2015 as a refugee. When the engine of the boat she was on failed, she and her sister saved 18 fellow passengers by dragging the sinking vessel to safety.

After their arrest, they spent 106 days in detention before being released on bail in December 2018.

A 2020 Amnesty International report shows the restrictive, sanctioning and punitive measures deployed against humanitarian workers defending migrants entering Europe. Amnesty International and various human rights organisations have criticised the charges brought against Binder.
Protests in Lesbos and at the Greek embassies in Brussels and London, in addition to online petitions have been launched this week demanding the charges be dropped.

A number of Irish politicians have called for the charges against Binder to be dropped, including MEP Grace O’Sullivan.

Speaking in advance of his trial, Binder told The University Times: “If you look at this in the broader context, the real purpose of these kinds of prosecutions is not to find us guilty – we can’t be found guilty, we did nothing wrong. It is to act as a chill factor, it is to disincentivise other people from engaging in search and rescue efforts at Europe’s borders.”