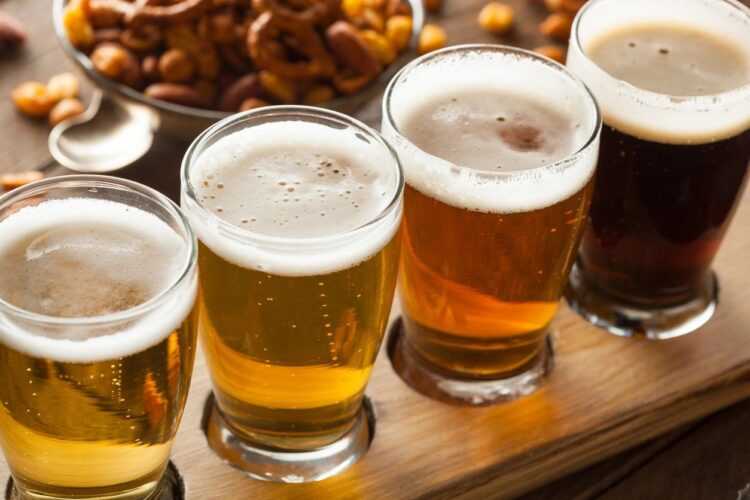 If you rang in the new year with a bottle of Aldi’s finest €7.99 bubbly, you’re likely disappointed at having to confront the implementation of new Irish legislation around alcohol pricing, which will from now on prevent you from making a toast in style for under a tenner.

New laws on the minimum pricing of alcohol took effect in Ireland today, enforcing minimum selling prices based on the number of grams of alcohol in a beverage, with one gram costing at least 10c. It is less than 24 hours since the new legislation kicked in, and the stark increases in alcohol prices have not gone unnoticed by the Irish population.

One of the first Instagram posts I came across today was from a well-known Irish media outlet who had nabbed a shot of an eight-pack of Druids cans for a steep €19.50. Druids is, if you’re unfamiliar, infamously cheap, and in terms of taste: well, you get what you pay for. Essentially, the post was intended to elicit humour out of the fact that, essentially, no one is going to willingly pay that much for sub-par cider. However, I returned to the same social media page just a couple of hours later to notice that said post had been deleted – I would imagine, having come under criticism for poking fun at a law that aims to reduce the harm caused by alcohol consumption in a country where 52 per cent of the population have been deemed hazardous drinkers by the Healthy Ireland Survey.

The legislation is primarily aimed at reducing alcohol consumption by heavy drinkers by making strong drink less affordable, thereby moderating the effects of alcohol-related harm. The new system of minimum unit pricing means that premium alcohol will largely not be affected, while cheaper brands and promotional prices will see huge increases.

After lamenting cheap four-packs of Pratzky, I was prompted to think of who these new laws will really affect

My first thought upon hearing this news was a lamentation of the infamous four-pack of Prazsky cans for a fiver. They have served me well throughout my student years while sessions were many and pennies were few. But, like the humour behind the absurdity of handing over nearly €20 for eight cans of extremely unexceptional Druids cider, this perspective waned and I was prompted to think of who these new laws will really affect.

While I have been fond of purchasing the previously aforementioned cheap cans or €4 bottles of wine when necessity calls, I have never been that student who has had to make the choice between drinks with friends and groceries for the week – choices that, within the context of an increasingly unaffordable rental market and the rising cost of living, is more common than some of us more privileged individuals may be aware of.

That, I believe, is the fundamental flaw with this new minimum pricing system, and countless laws that have gone before it – it targets the less well-off in society. As previously mentioned, the legislation has been cited as a measure that will prevent heavy drinkers and those with addiction problems from accessing strong drink at cheap prices. However, a knock-on effect of the increased prices will be that many low-income individuals, both students and otherwise, will no longer have the financial means to purchase alcohol for the purposes of socialising. I can already hear the argument of those who see no problem with this – something along the lines of: “Is that not a satisfactory outcome, that people will be forced to drink less alcohol and put their limited financial resources to better use?”

I have two issues with this common narrative, which particularly arises from those privileged individuals for whom these laws have no effect.

If the supply cannot be offered legally, society finds other ways, and those already most vulnerable are most susceptible to consuming more dangerous substances

Firstly, its basic understanding of how these laws will take effect is significantly flawed. Increases in the price of alcohol will not deter those who can no longer afford it from accessing some form of substance, be it alcohol or otherwise, to consume as part of their social lives. Where a bottle of wine or pack of cans to enjoy with friends is no longer accessible, supplies of other drugs are readily available, while the country will undoubtedly see a rise in illegal drink trade or what are commonly known as “Dial-A-Drink” services.

This is a common phenomenon. Where there is demand, there is supply. If the supply cannot be offered legally, society finds other ways and those already most vulnerable and suffering from the insecurity of low incomes are most susceptible to consuming more dangerous substances.

Secondly, this narrative perpetuates a damaging classist ideology. It expects poorer individuals to forego ordinary recreational expenses like alcohol consumption as a sort of abstract punishment for their low-income status. It privileges the already privileged, while those cracking under the weight of chronic instability and the struggle to make ends meet are underhandedly chastised for wanting the simple pleasures that most of us derive from a safe amount of alcohol.

Despite the supposed good intentions behind this new legislation, I expect to see a rise in drug consumption, illegal trade of alcohol and a palpable widening of the gap between rich and poor.

Yet, I am not surprised by this move on behalf of a government that has long chosen to opt for the laissez-faire approach to policy. The overarching belief of the current administration has always lain in the power of the market to solve social issues, from antigen tests to alcohol. It is the easy option to attempt to address the issue of alcohol-related harm by placing the responsibility back into the hands of those suffering from it.

Such an act betrays a lack of understanding of the nuances of alcohol-related issues, as well as of a basic level of empathy. The epidemic of alcohol-related harm, like most social problems, is not an isolated phenomenon. It is connected to and perpetuated by the mental health epidemic, housing crisis, cost of living – the very same insecure conditions that drive some to emigration or mental illness drive others to alcohol.

Policy makers are treating the symptom without tackling the cause. Why? I would assume because to do so would be to admit a failure to meaningfully address the issue of alcohol abuse in this country. And while I won’t hold my breath for the current government to own up to such misdemeanours, I believe the public should hold them accountable for them.

Improved standard of living, secure housing and accessible supports and services for addiction are necessary to both treat and prevent alcohol-related harm. Placing yet another financial burden on the low-income cohort of society will not.