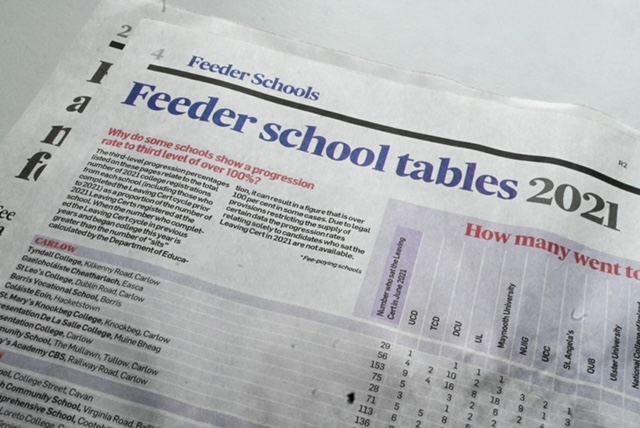 The publication of the national feeder school league tables has become as weighty an affair as the leaving certificate results day. The tables, which rank second-level schools around the country by how many of their students progress to third-level education, are often considered to be indicative of school quality. I believe, however, that they tend to be more accurate measures of the narrow, systematic perception of the purpose and function of a school.

The feeder school tables are generated through a combination of data provided by the State Exams Commission (SEC) and third-level institutions across the country. The tables are released annually, listing each secondary school alongside the percentage of their students who went on to attend third level and which institution they attended. Essentially, the data provides a superficial overview of a school’s performance based on how many students sat the leaving certificate and the decisions they made after those exams.

However, the most significant limitation of this data as a measure of school performance is that it ranks the level of success by progression to third-level. This is a core representation of how our education system is grounded in the belief that words written on a test and grades awarded on a certificate are an accurate measure of a student’s success.

I would argue, rather, that these calculations reflect the archaic ideals of the Irish perception of education. The system persists in the exclusion of students whose academic abilities exist outside of the margins of a test booklet or whose ambitions are not accounted for in a CAO application.

The feeder school tables are indicative of an education system whose sole purpose is to run like a conveyor belt to third level. Within this system, academic success is measured on the scale of institutionally backed results – a primary school report card, a secondary school state exams cert and, finally, a third-level diploma or degree. In each case, emphasis is placed upon quantifiable data. These are numbers that dangerously prompt us to scale achievement and, as exemplified in the feeder tables, compare levels of supposed merit.

We graduate through life with a series of arbitrary numbers used to represent ourselves and our status in society. Intellectual success cements itself in quantitative validation. This is not to say that academia should be overlooked – education is appropriately considered one of the most important human rights. However, my disillusion is not a critique of education itself, but of a system that is rooted in an old-fashioned scale of progress.

Throughout the Irish education system – primary, secondary and tertiary – emphasis is placed upon quantifiable data

While our education system continues to be built on a shared foundational curriculum, we must recognise that a one-size-fits-all approach is nothing short of an injustice and an insult to many students whose abilities fail to be recognised by the academic norm.

Second and third-level education is the basis upon which some people will thrive, blossom and flourish. It is also the ground upon which other students – through no fault of their own – are repeatedly trodden on and wilted.

It would be utterly disingenuous to exclude the fact that I attended a fee-paying school. My secondary education was one that was grounded in my effort, but simultaneously founded in my privilege. There is no denying that I worked extremely hard throughout secondary school but, concurrently, while I was racing towards the same exams as other students, I found myself in a more advantageous starting point than many.

The leaving certificate is, I believe, is too often viewed as a school’s primary purpose and a student’s greatest goal. For 14 years of education, the line between achievement and disappointment is drawn under a set of written papers. Very rarely is any other account of scholarly success considered.

Some other students thrive in non-classroom endeavours, such as sports

Students will spend more time in their school than virtually anywhere else in their formative years. To say that their greatest achievement upon graduation is grounded in a set of written exam papers fails to recognise just how important and diverse a “well-rounded” education is. From my own experience, I hated sports with the passion of someone who has two left feet and a loving relationship with the subs bench. But some other students thrived in a non-classroom environment where their talent could finally be recognised. Artistically inclined students who are more comfortable in a theatre than a lab are similarly unaccounted for in a system that punishes those who doodle outside the copybook margins.

Even beyond the topic of subjects, school is a place where the greatest skills are rarely taught in the formal curriculum. A school can be the place where students learn to speak up, mature in self confidence and can develop life-long interpersonal skills alongside those crucial intrapersonal lessons.

Each year the tables are released and each year the same papers that publish them also report on the imprecision of the information and the ways in which it offers a distorted perception of school performance. However, I don’t believe that simply offering context after the publication of the results changes the effect of the results themselves.

Minister for Further and Higher Education Simon Harris has committed to creating a broader perception of post-secondary options. His department’s commitments include making changes to the CAO application process and promoting apprenticeships. Further work must also be carried out to ensure that varied, comprehensive and inclusive career guidance is offered to every single student, without exception.

Feeder school tables perhaps represent a test for our education system. Thus far, it remains to be seen whether this is a test that is a guaranteed failure or one which might scrape a pass if some revision is undertaken.